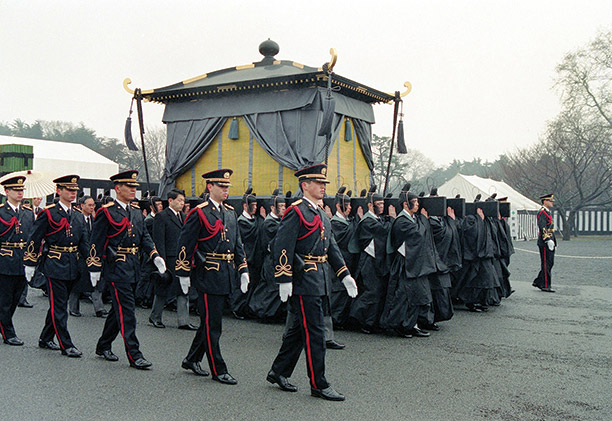 Hirohito succeeded his father as emperor in 1926. How far he whole-heartedly backed aggressive Japanese imperialism before and during the Second World War is disputed. Some historians believe he did, others that he could not control his warlike ministers and generals, which was the line he took. After the atom bombs fell on Hiroshima and Nagasaki in August 1945 Hirohito came down, decisively it seems, for surrender. He said Japan could not suffer the insufferable and must capitulate. He was determined to continue as emperor and the Allied occupation forces thought they needed him as a bulwark against his people’s resentment, so Japan was turned into a constitutional monarchy.

Hirohito died of cancer in the Fukiage Palace in Tokyo in January 1989, aged 87, after a reign of 62 years. The state funeral was a careful modernisation and dilution of the traditional Shinto rites. Reed pipes sounded as the emperor’s coffin was brought from the palace in cold rain to lead 40 black cars in procession to the Shinjuku Gyoen park for separate religious and secular ceremonies. Cannon fired a salute, bands played a dirge and Shinto ritual offerings of food and silk were made. Later the body was interred in the Haichioji imperial mausoleum west of Tokyo.

The estimated 200,000 people who lined the Tokyo streets were only a quarter of what was expected, but an array of important personages from 163 countries was headed by George Bush, the new president of the United States, with the secretary-general of the United Nations, presidents Mitterrand of France, Aquino of the Philippines and Suharto of Indonesia, as well as prime minister Benazir Bhutto of Pakistan. Britain was represented by the Duke of Edinburgh.

The presence of these dignitaries’ has been attributed to Japan’s emergence as a financial superpower. It looked as if the rest of the world took more notice of Hirohito’s departure than the Japanese did.