The only Englishman ever to be Pope, Nicholas Breakspear was elected on December 4th, 1154. 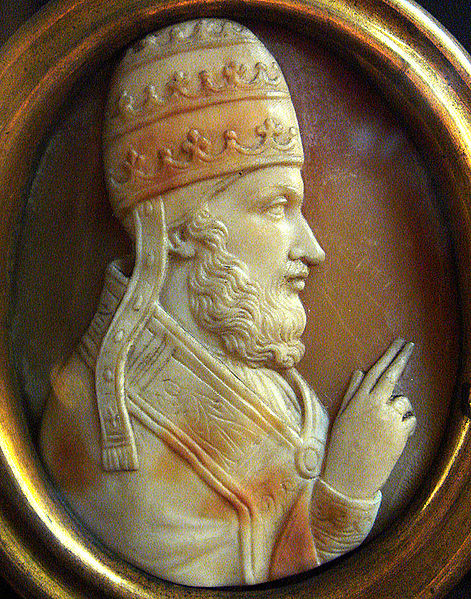 Nicholas Breakspear spent most of his life outside England. Born in humble circumstances at Abbots Langley in Hertfordshire, perhaps about 1100, he studied in Paris and became a canon regular of St Rufus near Avignon. He rose to be abbot and his abilities attracted the notice of Pope Eugenius III, who made him a cardinal and sent him to reorganise the church in Scandinavia. He was strikingly successful and was chosen to be pope in succession to Anastasius IV.

It was not an easy time. In Rome itself the Vicar of Christ had to contend with a revolt led by Arnold of Brescia, demanding an end to the temporal power of the papacy. The new Pope laid the city under an interdict and Arnold was hanged. There were problems with the Normans in the south and with the Holy Roman Emperor, Frederick Barbarossa. Adrian crowned him in 1155, but Frederick left the Pope in no doubt that as Emperor of Rome he intended to control Rome, and when they first met he ostentatiously refused the usual courtesy of holding the Pope’s stirrup.

From an English or Irish point of view, however, the principal interest of Adrian’s papacy is the bull Laudabiliter, which apparently gave Henry II of England papal approval for the conquest of Ireland. In 1155 or 1156 an old friend of the Pope’s, named John of Salisbury, who was secretary to the Archbishop of Canterbury, Theobald of Bec, arrived in Rome on a mission for his master. Canterbury had lost its former jurisdiction over Irish bishops and it was in Canterbury’s interest to depict the Irish as savages in need of a firm, correcting hand. ‘In response to my petition,’ John later reported, ‘the Pope granted and donated Ireland to the illustrious king of England, Henry, to be held by him and his successors’ and ‘sent the king a gold ring, set with a magnificent emerald, as a sign that he had invested the king with the right to rule Ireland.’

Henry’s conquest of Ireland had to wait until the 1170s, but the story was repeated in the following decade by Gerald of Wales, who provided the flowery text of the papal bull in his Expugnatio Hibernica (‘The Conquest of Ireland’). ‘Laudably and profitably does your magnificence contemplate extending your glorious name on earth,’ it began, and went on to commend Henry’s intention ‘to enlarge the boundaries of the Church’ and ‘to expound the truth of the Christian faith to ignorant and barbarous peoples’.

The Pope was pleased to agree that ‘you may enter that island and perform therein the things that have regard to the honour of God and the salvation of that land...’Whether the document was genuine or a forgery has been hotly disputed, but most authorities tend to accept that Rome issued it or something like it. Adrian meanwhile had died at Anagni, near Rome, in 1159.