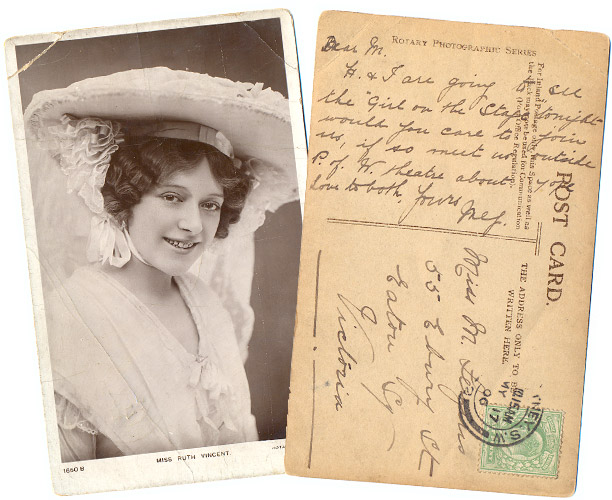 Collectors tend to have their favourite pieces. Though slightly faded, one of mine is a postcard postmarked May 1906 of the actress Ruth Vincent (pictured above). I bought it ten years ago from a collectors’ market in central London. More than any other I’ve come across, the card instantly opens up the extraordinary postcard culture of Edwardian Britain.

The market is still going strong. Every Saturday, by Embankment Tube station, dealers set out 30 or so tables of coins, stamps and other ephemera. Postcards are filed in heavy-duty cardboard boxes, ordered according to the images on their fronts. The Vincent postcard would have been behind a divider marked ‘Actresses’ or ‘Theatre’. However, as charming as the photograph is, it is the message on the back that makes the card special:

Dear M.
H & I are going to see the ‘Girl on the Stage’ tonight. Would you care to join us, if so meet us outside P. of W. theatre about 7 o/c. Love to both.
Yours Meg.

Tonight. With one word, Meg’s postcard becomes a completely foreign object to the 21st-century eye. Sending a postcard today signals not caring about the timeliness of a message. Back then speed was its essence. With the telephone not yet widely available and with up to six deliveries a day, postcards helped keep Britain on the move. M. should have received Meg’s postcard in good time to be at the Prince of Wales Theatre for 7 o’clock. It is even possible, before setting off for the West End, that Meg received a card in reply.

Of course, while the postcard seems alien, aspects of Meg’s invitation are very familiar. Immediate, informal, full of abbreviations, it has much in common with a text message or a tweet. Like now, people used postcards to report back from trips away. But because they were delivered so quickly, Edwardian postcards carried more than wish-you-were-here greetings. Similar to texts, people used them for every kind of interaction: urgent requests for stock, declarations of love, one-liners to celebrate football victories.

What is not apparent from looking at Meg’s card is just how novel this form of the postcard was in 1906. Postcards in general had been around for some time. In Britain they were introduced on October 1st, 1870, a year after the Austrian Post Office launched its Correspondenzkarte. With postage set at one half-penny, postcards represented a cheap alternative to writing letters and were welcomed by many. In his diary entry for October 4th, the Reverend Francis Kilvert described them as ‘capital things, simple, useful and handy’. They were popular straight away. On the first day alone, 575,000 cards passed through the Post Office’s London headquarters at St Martin’s Le Grand in the City.

However the postcards on offer were very different from the Rotary photographic card used by Meg. Until 1894 people were limited to official postcards. Produced under a monopoly contract by the printers De La Rue (who now print bank notes), the cards were tiny, drab affairs. Crucially the ‘front’ had to be reserved for the address. Even when ‘private’ cards were permitted, officials were reluctant to allow more than the address on the ‘front’. There was concern that having a message on the address side would make sorting less efficient and that postal workers would be drawn into reading people’s messages.

In 1902 the requirement to have an entire side for the address was relaxed for inland mail. Finally the postcard took the form we know today. The ‘back’ became the ‘front’: an image could now take up the whole of one side, with the other split between address and message. Coming at a time when its population was increasingly literate, Britain went from merely using postcards to experiencing a kind of postcard mania.

The extent of the surge in sending cards was remarkable. In his report for 1903-4, the first full year of the ‘divided back’, the Postmaster General tried to make sense of there being no growth in the number of letters sent that year: ‘[It] is doubtless partly due to the stagnation in trade,’ he argued, ‘... but it is also largely the result of the enormous increase in the use of pictorial postcards, which show a tendency to displace letters as well as official postcards.’ Postcard traffic was up more than 25 per cent compared to 1902-3. By the time Meg sent her card, three years later, the Post Office was delivering more than 830 million cards a year, compared to 400 million at the turn of the century.

To understand the Edwardian craze further, it is worth returning to the postcard of Ruth Vincent. In three of the corners, you can make out small creases. More than likely, each arose from the card being put into an album – perhaps by M. herself. For unlike texts and tweets, Edwardian postcards were collected as well as sent. As the ‘p.c.’ became ever more popular, postcard shops, collecting magazines and clubs sprang up across the country. In fact, adding to someone’s collection was often the sole purpose of sending a card; standard Edwardian postcardese included the phrases ‘one for your album’ or ‘a p.c. for your collection’.

Naturally publishers worked hard to encourage this, relentlessly bringing out new types of cards. Among major publishers there was intense competition to issue the most innovative designs: for one series, London-based Raphael Tuck & Sons managed to impress musical records into the front of cards. Meanwhile, local firms would vie to turn around cards of news stories as quickly as possible; postcards of train wrecks, for example, were often on sale within hours of an accident.

In many ways it is proof of the success of Tuck’s and other publishers that the Edwardian postcard remains something that is collected today. Compact, diverse and affordable, postcards at markets and on eBay continue to appeal to large numbers of people. Wonderfully, having passed from collection to collection over the last hundred years, surviving postcards also offer us rich insights into how people lived and communicated at the beginning of the 20th century. 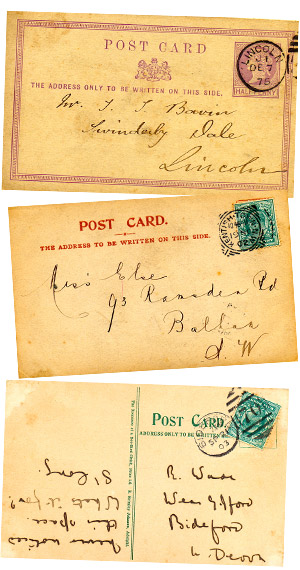 A key part of the story of the postcard is the gradual lifting of constraints by the Post Office. When postcards were first issued, in 1870, the Post Office restricted what could go on each side: ‘The front (or stamped) side is intended for the address only’, read the official notice sent to post offices. ‘There must be no other writing or printing on it, nor must there be any writing or printing across the stamp.’ Senders were further limited by the size of official postcards: just 4¾ by 3 inches.

Yet the postcard won many advocates, most notably William Ewart Gladstone. In 1899 The Times suggested that no one had been more responsible for the take-up of the postcard, noting how the four-times prime minister ‘made countless numbers happy by the receipt of a card bearing his well known writing’. The article came as the Post Office lifted further restrictions on the postcard’s form. In 1894 officials had ruled that privately printed cards could be sent with a halfpenny stamp affixed. But they remained very small. Five years later, after pressure from publishers, the Post Office allowed postcards to be the size we recognise today. Finally, in 1902, the address side was divided to make room for a message. For some, like the sender of the card to R. Wade (pictured right), the new form came as a surprise: ‘Never noticed this space. What’s it for?’ 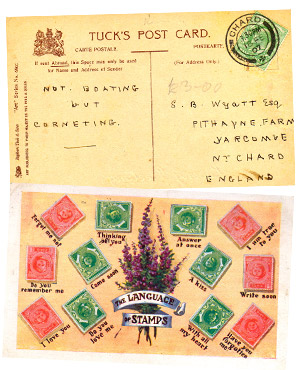 As with today’s social media there were initially major concerns about the privacy of messages. In a speech in 1870 the Lord Mayor of London warned of the dangers from ‘obscene’ messages being sent into people’s homes. By the Edwardian era people were employing codes to get round the postcard’s public form. However, many felt comfortable openly using cards for intimate messages, regardless of who saw them en route.

And it wasn’t just the sender’s writing or the postcard’s front that were deployed to signal someone’s love. An angled stamp was widely known to suggest affection towards the recipient. Guides to ‘The Language of Stamps’ were published on cards – although these postcards tended to be used by placing an ‘X’ against the appropriate stamp depicted on the front, rather than acting as a definitive key. 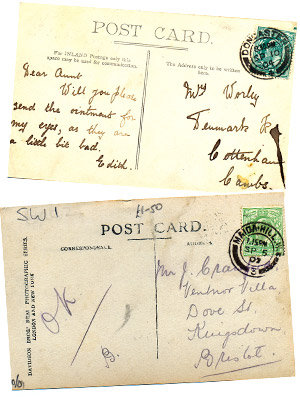 Free from the formalities of letter writing, the postcard allowed people to use the post in new and imaginative ways.

Cards were regularly sent with the briefest of messages; some carried urgent demands, others added a line of dialogue to ongoing conversations.

On a card sent on September 10th 1904, Edith asks her aunt, ‘Will you please send the ointment for my eyes, as they are a little bit bad.’

From the back of a card of Arundel Castle, Harold learns Dad is ‘on the way home’. And for B. ‘OK’ alone is enough to justify a ha’penny green stamp. 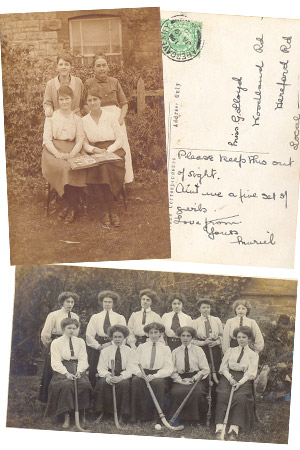 Among those who could afford to do so, it was common for people’s cards to use personal photographs. But this was not without its problems. On the postcard (right) members of a household are pictured with their postcard album – a prize possession in many homes.

For some, knowing cards might end up on display was a concern. In 1902 a correspondent in the Cheltenham Looker-On, went as far to advise people to take great care with cards ‘destined for the publicity of an album’. On the card pictured right, having sent Miss G. Lloyd a picture of her hockey team, Muriel reveals her conflicted feelings about featuring on the postcard’s front. ‘Please keep this out of sight,’ she writes, before adding, ‘Ain’t we a fine set of girls’. 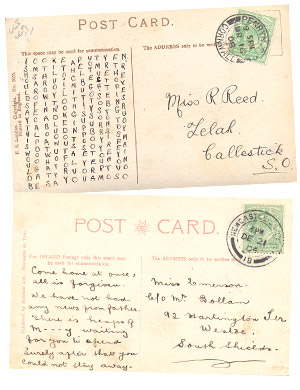 Not all cards were sent in a rush. Some appear to have been written after a great deal of thought. Franked on December 23rd, 1904, the postcard to Miss Holbrook carries a personally composed Christmas carol. Meanwhile, the card sent by ‘N’ to Miss R. Reed is written in an eye-catching code; not, however, one that is difficult to crack. Starting in the top left-hand corner, the message reads down and then up alternate columns. Finally, it is hard to believe the card to Miss Emerson was put together without rehearsal. As if taken from an E.M. Forster novel, it reads: ‘Come home at once, all is forgiven. We have not had any news from father. There is heaps of m—y waiting for you to spend. Surely after that you could not stay away.’