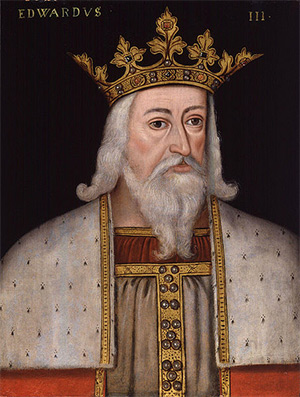 One of the most successful of English rulers was the son of one of the least effective, Edward II. Perhaps Edward III owed his force of character to his mother, the beautiful Queen Isabella, daughter of Philip IV of France and sister of three French kings in succession. In her own lifetime a chronicler referred to her as ‘that harridan’ and ‘Jezebel’ and in the 18th century the poet Thomas Gray called her ‘She-Wolf of France with unrelenting fangs’.

Isabella may have been about 16 when her first child was born early that Monday morning and it was possibly a difficult birth. His father was delighted and it helped to console him for the death the previous June of his favourite, Piers Gaveston. The boy was brought up largely away from his parents. He was handed over to a nursemaid and was quickly given a separate household, which in 1314 was settled at Wallingford Castle (then in Berkshire) and which as the years went by expanded to include his guardian, his steward, his treasurer and his tutors and servants. He grew up speaking both English and French fluently, but judging from his later achievements on the battlefield it was his training in the arts of war that made the deepest impression. He was also deeply imbued with knightly chivalry and would later found the Order of the Garter.

Queen Isabella bore her husband three more children, but she hated his new favourite, Hugh Despenser (as she had hated Gaveston), and fiercely resented his and his family’s dominating position at court, as did many of the king’s most important lords. Early in 1325 her husband sent her to France to negotiate a peace treaty with her brother, King Charles IV, which was concluded in May. In September the 12-year-old Edward was sent to France to pay homage to King Charles for Aquitaine.

This gave Isabella, who had stayed in France, an opportunity to seize her son as a pawn in an attempt to destroy his father. In Paris she had once again met Roger Mortimer, a Marcher lord and a rebel against Edward II who had escaped from the Tower of London in 1323 and fled across the Channel. Isabella and Mortimer became lovers, or perhaps had been lovers before. She now publicly broke from her husband. Despenser was offering bribes to get the couple kidnapped and they moved to Flanders to organise an army to invade England, enlisting the support of the Count of Hainault and betrothing young Edward to his daughter Philippa. Their invasion fleet with perhaps 1,500 men on board reached the Suffolk coast in September 1326.

Lords and knights flocked to join them, support for Edward evaporated and in November he was taken prisoner. In January 1327 he was compelled to abdicate and the 14-year-old Edward III was crowned in Westminster Abbey by the Archbishop of Canterbury on February 1st. England was now run by Mortimer and Isabella. Edward II was murdered at Berkeley Castle in Gloucestershire in September. How far Isabella was responsible for that is disputed.

Mortimer swiftly acquired an earldom and rich estates. Behaving with ostentatious arrogance and treating the young king with condescending familiarity, he aroused the same resentment among powerful English lords as Gaveston and Despenser before him. His position was weakened when Edward and Philippa, who had married in 1328, had a son and heir (the future Black Prince) in 1330. Edward resented his subordinate position and he decided to act. In October he and a group of some 20 trusted men took Mortimer and Isabella unawares in Nottingham Castle. The castellan quietly tipped Edward’s men off to a secret passage into the castle and they seized Mortimer after a struggle. Ignoring his mother’s pleas for mercy for her lover, Edward had him taken to London and summoned a parliament to condemn him on accusations of usurping royal power and ordering Edward II’s murder. He then had him ignominiously hanged at Tyburn, stripped naked like a common criminal.

Edward, who had just turned 18, steadily restored the authority of the monarchy. While treating Isabella with apparently genuine affection and blaming everything on Mortimer, he excluded her from the government and kept her in powerless luxury in various country castles until her death in 1358. It was as her son, after all, that he asserted his claim to the throne of France and it would have made no sense to diminish her standing. At home he presided over a long period of peace and prosperity until his late years and under him a strong sense of English national identity and pride developed. He died aged 64 in 1377 and for the mass of his subjects he was an ideal king.