A New Line in Empire

Though much of the West has withdrawn from empire, one of the world’s rising powers offers the latest twist on imperialism. What is the use of it, none can conjecture,
What it will carry, there is none can define,
And in spite of George Curzon’s superior lecture,
It is clearly naught but a lunatic line.

The Lunatic Line referred to in this ditty by the maverick Liberal MP Henry Labouchère was a strategic railway built to give British East Africa access to the Great Lakes region. Officially the Uganda Railway, its terminus, at Kisumu on Lake Victoria’s eastern shore, was opened in 1901.

The line’s construction met with frequent resistance and occasional catastrophe. Masai warriors slaughtered around 500 workers at Kedong in 1895; three years later as many as 135 workers were killed by lions while building a bridge across the River Tsavo; in all, some 2,500 of the project’s labourers died, many of whom were brought in from India.

The story of the Uganda Railway, disparaged at the time as a waste of taxpayers’ money, might have ended then, but a new chapter has opened. While historians and theologians argue over a new project at Oxford University which seeks to address the ethics of imperialism, China is getting on with the real thing, in the guise of its massive trillion dollar One Belt scheme. A 21st-century take on the Silk Road, it aims to cross and connect great swathes of the developing world. It has now reached Africa. Lines from Djibouti to Addis Ababa (based on a 19th-century French railway) and from Mombasa to Nairobi are already open. Eventually, tracing the Uganda Railway, it will reach as far as Rwanda.

This new Scramble for Africa is imperialism with a twist, for the scramble is as much from African states seeking China’s economic largesse and technical skills as it is about China’s desire to be a major global player, transforming a continent for its own advantage. Despite concerns about corruption, especially in Kenya, China’s interventions are still broadly welcomed by local populations. But history tells us that the imperial path is a costly one, economically and morally, even when dressed up as benign. 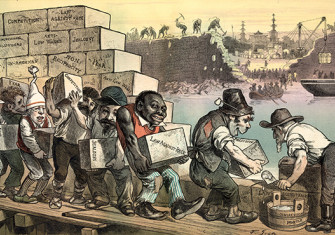 Asia and the Old World Order