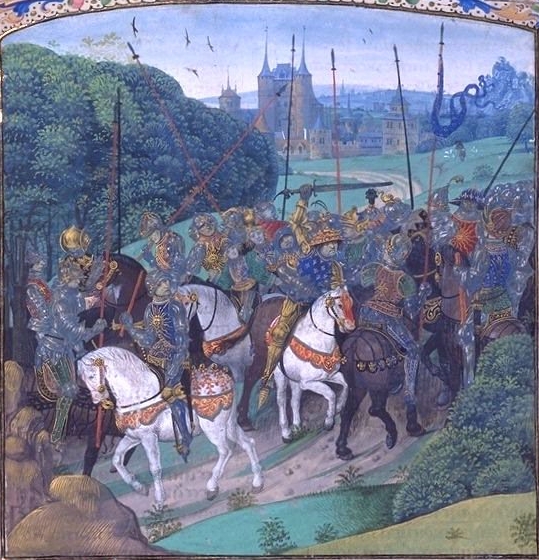 The fact that Charles VI of France (r. 1380-1422) suffered from intermittent bouts of madness allowed other members of the royal family to exercise almost regal power in their own domains, where they siphoned off part of the royal revenue for their own purposes.

The dukedoms of Burgundy, Anjou and Berry effectively became satellite states, each with its own administration, civil service and law courts. From 1404 Burgundy was in the singularly ruthless hands of John the Fearless, a nephew of Charles VI who had gained his nickname after his reckless courage in a battle against the Turks in 1396. A bitter struggle for power developed between Duke John and Louis, Duke of Orleans, who was Charles VI’s younger brother, virtually governed France for him and was suspected of being the lover of the queen, Isabeau. At one point in 1405 her son, the Dauphin, was kidnapped by Duke John, though subsequently recovered by the queen and Duke Louis, and there was a story that Duke Louis, who was an enthusiastic womanizer, had tried to seduce Duke John’s beautiful wife and when she refused him had attempted to rape her. Duke John decided to rid himself of Duke Louis and in June 1407 enquries were being made among property agents in Paris for a suitable house, where presently a gang of murderers led by a Norman knight called Raoul d’Anquetonville installed themselves.

Between about seven and eight o’clock in the evening on November 23rd the Duke of Orleans was riding quietly back from the queen’s house with a guard of around ten men, lighting their way with torches. The only eyewitness said that she thought the duke was singing, when he was suddenly attacked by seven or eight masked and armed men. Shouting ‘Kill him! Kill him!’, they chopped one of his hands off and cut his head in two, and he fell off his horse while his brains spurted over the road. They beat him mercilessly, she said, ‘as if they were beating a mattress’, and she saw a big man, his face concealed by a red hood, who told the attackers, ‘Let’s go! He’s dead! Take heart!’

The dead man’s scattered brains and severed hand were gathered up and put in his coffin with the rest of him, and he was buried in the church of the Celestins in the presence of the Dukes of Berry and Anjou as well as Duke John the Fearless, ostentatiously mourning. It was not long before suspicion fell on Duke John and he admitted that he had ordered the murder. He fled Paris three days after the killing for the safety of his own territory and presently paid Raoul d’Anquetonville a handsome sum in consideration of his ‘notable services’.

Duke John argued that the assassination was necessary and justified for the protection of the king and the rest of the royal family, whose lives were threatened. It was for ‘the general good of the realm’, as he proclaimed in a justification issued in 1408 which accused the late  Duke of Orleans of trying to bring about the king’s death by black magic and which Duke John’s biographer Richard Vaughan described as ‘one of the most insolent pieces of political chicanery’ in history. Charles VI accepted it, all the same, and issued a formal pardon. In the following year a solemn ceremony of reconciliation between Duke John and the murdered man’s son and successor was held in Chartres Cathedral. John the Fearless failed to take over France, but he was one of the architects of the ascent of Burgundy to become a leading European power.