Mark Bryant looks at the rich tradition of cartoons and caricatures inspired by the Gunpowder Plot. 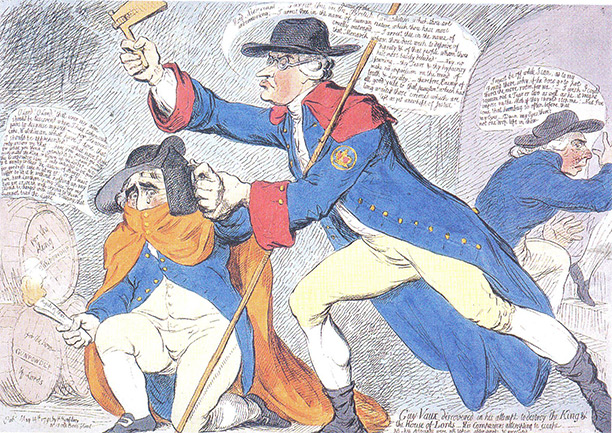 The 1605 Gunpowder Plot to blow up the Houses of Parliament and kill James I, his family and most of Britain's politicians and aristocracy also occasioned one of the country's first ever political prints, more than 70 years before the birth of William Hogarth. The surname of its best remembered protagonist, Guy Fawkes, led to many pictorial puns on 'fox' and the plot itself, together with effigies, masks and bonfires, continues to be used as a satirical tool by cartoonists.

One of the earliest popular images of the 'Powder Treason' (as it was originally called) was a four-panel engraving by the Dutch artist Crispijn van de Passe the Elder ( c.1564-1637) published on January 30th, 1606. The top panel features the main Catholic conspirators; the second has them being dragged through the streets of London; the third shows their disembowelling; and the fourth pictures their heads stuck on poles.

Ten years later came Francis Herring's Latin verse history of the incident, translated by John Vicars ( 1582-1652) as Mischeefes Mysterie: or, Treasons Master-Peece, the Powder Plot ( 1617), which includes a woodcut of an eagle delivering a letter to the Secretary of State, Lord Salisbury, as King James looks on. The allusion is to the warning note that the Catholic Lord Monteagle received from his relative Francis Tresham (one of the conspirators) which he passed on to Salisbury, thereby exposing the plot.

A scene featuring Fawkes is shown in 'Guy Vaux the 2d' (December 16th, 1756), lampooning the wily Secretary of State Henry Fox shortly after his resignation from the Cabinet (which hastened the collapse of the Duke of Newcastle's government). Drawn literally as a fox (complete with bushy tail), he is dressed as Fawkes walking towards the Houses of Parliament beneath the watchful Eye of Providence. The caption reads: "'The Wicked is snared in the Work of his own Hands, thou hast seen it" Psalm 10th'.

Henry Fox's son, the statesman Charles James Fox, received the same kind of treatment at the hands of James Gillray (1756-1815). ln 'GuyVaux' (c. June 1782) George III (with the head of an ass) is asleep on his throne- beneath which is a barrel of gunpowder- as Fox (as Fawkes, with a fox head and holding a lantern) appears at the door with his fello~ · conspirators. Two years later came 'Guy Vaux or F-Blowing up the Par-t House!!!' (January 30th, 1784), with Fox blowing up William Pitt's India Bill, and 'Guy-Vaux, discovered in his attempt to destroy the King and the House of Lords- His Companions attempting to Escape' (May 14th, 1791) featuring Edmumd Burke discovering Fox and R.B. Sheridan - both supporters of the French Revolution- about to set fire to the gunpowder casks using a flaming copy of Thomas Paine's Rights of Man.

The first full-page cartoon on the subject to appear in Punch (founded in 1841) was 'The Guy Mayor's Day' (November 10th, 1843) by John Leech (1817-54), satirising the Lord Mayor's Show. More political was 'The Guy Fawkes of 1850, Preparing to Blow Up All England!' (November 9th, 1850), also by Leech, published during a wave of anti-Catholic feeling after Pope Pius IX created Nicholas Wiseman the first Cardinal Archbishop of Westminster. It shows the pope (wearing a Guy Fawkes mask) piling up Catholic bishops' mitres like gunpowder barrels under Parliament and reflected the magazine's own anti-Catholic stance which resulted in the resignation that year of John Doyle's eldest son Richard (1824-83), who in 1849 had designed Punch's most famous cover (which lasted until 1954).

Problems in Ireland gave rise to a number of Guy Fawkes cartoons, notably 'The Fenian Guy Fawkes' (Punch, December 28th, 1867) by John Tenniel (1820-1914). This was later reproduced as a part of 'A Century of Progress!' (Sunday Telegraph, November 24th, 1974), by John Jensen (b. 1930) at the time of the IRA's bombing of Westminster, Guildford and Birmingham.

The same year that Punch was founded came the popular novel Guy Fawkes, or The Gunpowder Treason: An Historical Romance (1841) by William Harrison Ainsworth with illustrations by George Cruikshank (1792-1878). Cruikshank also drew 'The Unexhibited Cartoon of Guy Fawkes' (The Comic Almanack, 1844), lampooning the 1843 exhibition of designs for murals for the new Houses of Parliament, which was satirised by John Leech in 'Cartoon No.1: Substance and Shadow' (Punch, July 15th, 1843), the drawing which gave the word 'cartoon' its modern sense (see 'The First Cartoon', History Today, November 2005).

In 1849, after the crash of railway shares, Leech also drew the speculator George Hudson ('the Railway King') as a Guy being carried on a chair ('The Great Railway Guy for 1849', Punch, November l0th, 1849) and 15 years later he produced a striking colour cartoon on the Gunpowder Plot ('Discovery of Guido Fawkes by Suffolk and Monteagle') for Book VI, Chapter I of The Comic History of England (1864) by Gilbert A'Beckett.