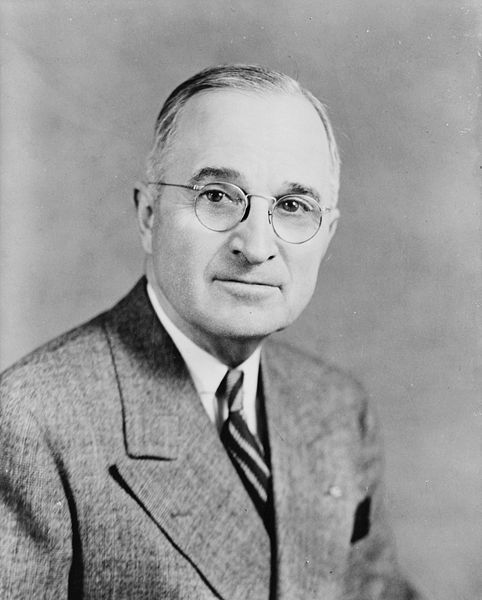 In September 1949 the American, British and Canadian governments announced that an atomic explosion had recently occurred in the Soviet Union. The Soviet news agency Tass responded, laughably blaming the blast on large-scale construction work, while reminding everyone that Soviet foreign minister Molotov had announced in 1947 that the USSR knew how to make an atomic bomb, but had no intention of using one.

In the United States there had been urgent secret discussion of a new and vastly powerful 'super-bomb', but apparently the first President Truman heard of it was early in October 1949. Some of the Los Alamos scientists feared that the USSR might already be working on a hydrogen bomb and one of them, the arch-hawk, Edward Teller, urged the rapid development of a weapon with an explosive force equivalent to 16 million tons of TNT, 800 times as much as the atomic bombs dropped on Japan in 1945. Senator Brien McMahon, chairman of the joint Congressional Atomic Energy Committee, began pressing the president for a crash programme. Truman complained that he was 'being blitzed into the thing by the military establishment', but he seems to have had little real doubt about what his decision would have to be.

On January 18th a long article about the new weapon appeared in the New York Times. On January 29th Senator Tom Connally, chairman of the Senate Foreign Relations Committee, said he thought the US should proceed with the hydrogen bomb, to help to keep peace in the world like the atomic bomb before it. Senator McMahon issued a statement next day that the matter of the hydrogen bomb was 'under continuous investigation and consideration'. On January 31st Truman announced that, in accordance with his responsibility to see that the country was able to defend itself against any possible aggressor, he had directed the Atomic Energy Commission 'to continue with its work on all forms of atomic energy weapons, including the so-called hydrogen or super-bomb'.

A new stage had opened in the arms race and progress was swift. The American bomb was successfully tested at Eniwetok Atoll in the Pacific in 1952 and the USSR tested its first hydrogen bomb a year later. By 1961 the Soviet Union had a weapon which yielded an explosive force equivalent to 60 million tons of TNT, and by the end of the 1980s the world's nuclear powers had some 40,000 thermo-nuclear devices in their arsenals.