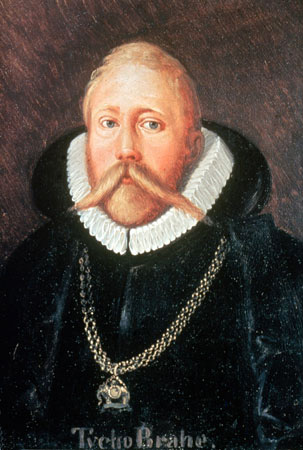 In 1901, on the 300th anniversary of his death, the bodies of Tycho Brahe and his wife Kirstine were exhumed in Prague. They had been embalmed and were in remarkably good condition, but the astronomer’s artificial nose was missing, apparently filched by someone after his death. It had been made for him in gold and silver when his original nose was sliced off in a duel he fought in his youth at Rostock University after a quarrel over some obscure mathematical point. He always carried a small box of glue in his pocket for use when the new nose became wobbly.

Tycho Brahe was famous for the most accurate and precise observations achieved by any astronomer before the invention of the telescope. Born to an aristocratic family in Denmark in 1546, he was one of twin boys – the other twin was still-born – and while still a baby Tycho was stolen from his parents by a rich, childless uncle, who paid for his education and sent him to Leipzig University to study law. His imagination had been fired, however, by a total eclipse of the sun in 1560 and he was determined to be an astronomer. He found that the existing tables recording the positions of planets and stars were wildly inaccurate and dedicated himself to correcting them.

After studying at Wittenberg, Rostock, Basel and Augsburg, and inheriting both his uncle’s and his father’s estates, Tycho set up his own observatory and in 1572 discovered a supernova in the constellation of Cassiopeia where, in the state of knowledge of the time, it had no business to be. The discovery made him famous and in 1576 Frederick II of Denmark gave him the island of Hveen, or Ven, in the Sound between Copenhagen and Elsinore, and money to build an improved observatory, where he and his assistants systematically corrected the accepted astronomical calendars, observed comets and discovered the third inequality of the moon. Tycho had a comfortable house with running water, a library, a chemical laboratory, attractive gardens and an outdoor aviary as well as a printing press so that he could produce his own books. Visited by scholars from all over Europe, he employed craftsmen to make the finest astronomical instruments obtainable. To the horror of his upper-crust contemporaries he had meanwhile married a peasant girl, by whom he would have eight children.

Tycho fell out with King Frederick’s son, Christian IV, and left Denmark in high dudgeon in 1597. Two years later he settled in Prague under the patronage of the Emperor Rudolf II. Johann Kepler was his pupil and assistant in his final years. Invited to dinner by an old friend, Tycho drank so heavily that he suffered a rupture and died after some days of agony, aged fifty-four. The Emperor Rudolf gave him virtually a state funeral.