Having conquered England, the Viking king died after a fall from his horse on February 3rd, 1014. 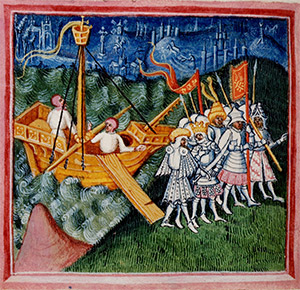 Viking raids on the British Isles began late in the eighth century. After their fill of rape and pillage the raiders would sail away again loaded with their ill-gotten loot. In some cases, however, they founded permanent settlements, as in northern and eastern England in what became known as the Danelaw. Some of the attacks penetrated deep inland into England and had to be fought off by English kings. Between around 900 and 980 England enjoyed a respite, but then the raids began again.

By that time the Danish monarchy had developed into a thoroughly effective institution. Harald Bluetooth, who ruled from the 950s, had taken a firm grip on Denmark, extended his sway over areas of Norway and started his realm on the path to Christianity. In the middle 980s, however, he was dethroned by his son Svein and driven into exile in Germany. He died soon afterwards.

Svein (or Swein) Haraldsson, known as Forkbeard, was then apparently in his middle twenties. Much of the information about him is in doubt because it comes from hostile sources, but he was certainly an ambitious and highly competent war leader and he was the first reigning Scandinavian king on record to command Viking raids himself.

England was a prosperous and tempting target. It was ruled by Ethelred the Unready (originally meaning ‘ill-advised’), who had succeeded to the throne at the age of 12 in 978. From 991 his regime paid marauding Vikings lavish bribes known as Danegeld to go away, which of course gave them a motive for attacking again. By that time Svein was leading his own men and those of chieftains who supported him in profitable assaults on England. In 994 he attacked London and the south-east. In the early 1000s he had to concentrate on securing his position in Norway and taking control of part of Sweden, but after that he turned his eye on England once more.

In 1002 Ethelred had many Danes outside the Danelaw murdered in the St Brice’s Day massacre. According to one story the victims included Svein’s sister Gunhilda, who was living in England with her English husband. The vengeful Svein spent 1003 and 1004 in England ravaging far and wide. In 1005 he had to return to Denmark to deal with a severe famine, but Viking attacks on England continued, some of them probably led by Svein’s chieftains. In 1009 a Danish warlord called Thorkell the Tall led an invasion and remained in England marauding until in 1012 some of his men captured Archbishop Alphege of Canterbury and killed him at a drunken feast. A huge bribe now persuaded Thorkell and his army to switch their support to Ethelred.

It may have been this that convinced Svein to conquer England before Thorkell did. In the summer of 1013, accompanied by his younger son Cnut, he arrived with a substantial fleet and army on the east coast, sailed up the Humber and established a base at Gainsborough, an inland port on the River Trent in Lincolnshire. It did not take long for the Northumbrians and the whole Danelaw to submit to him and he led his men south, wreaking atrocious havoc. After attacking London, where Ethelred and Thorkell managed to keep him at bay, he turned to the south-west, which yielded to him. London sent him hostages to avoid another attack and the Anglo-Saxon Chronicle says that now ‘all the nation accepted him as full king’. Ethelred fled to Normandy.

Svein had taken England by the end of December, but he lived only a few weeks to enjoy his triumph. He died at Gainsborough in 1014, in his fifties, according to one report after a fall from his horse. He was buried at York, the capital of the Danelaw, but perhaps for fear that Ethelred might return from abroad and have the corpse destroyed it was dug up and taken to Denmark where Svein was finally interred.

Svein was succeeded in Denmark by his elder son, Harald, but his army in England hailed Cnut as king. Ethelred returned from Normandy and Cnut was forced to retreat briefly to Denmark, but he came back with an army in 1015, landing at Sandwich on the Kent coast and going on to ravage the south-west to such effect that more and more English turned to his side. So did Thorkell the Tall and after Ethelred’s death in 1016 Cnut won victories in battles against his son Edmund Ironside. Edmund died before the end of the year and Cnut was recognised as ruler of all England. He proved to be an excellent king, succeeded his brother Harald in Denmark in 1018 and dominated a powerful northern empire in England, Denmark and Norway until his own death in 1035.