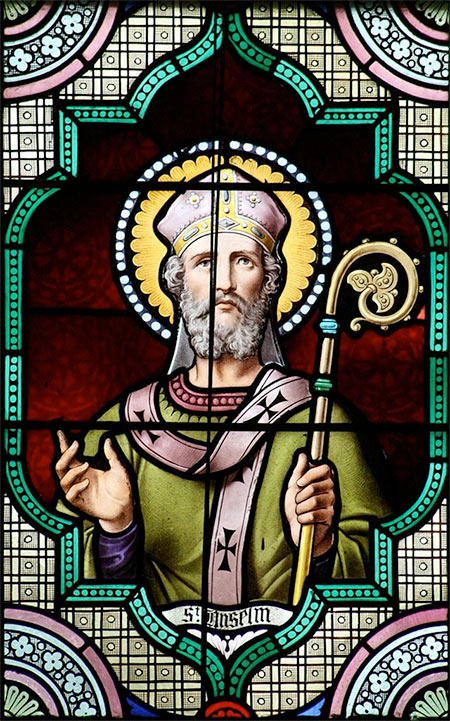 Anselm of Canterbury is one of the most important and influential figures of the medieval world, best known for his ontological ‘proof’ of the existence of God. He spent most of his adult life at the Benedictine abbey of Bec in Normandy, where he gained a widespread reputation as a brilliant theologian.

Born to a wealthy family in the Piedmont area of northern Italy, he had entered the abbey in his 20s in 1060, drawn there by the intellectual reputation of the prior, Lanfranc of Pavia. Three years later, Anselm succeeded him as prior and was unanimously, though on his part reluctantly, elected abbot in 1078. Anselm detested administration, considering it a distraction from the true purpose of life: to worship, study and think. ‘I want to understand something of the truth which my heart believes and loves,’ he wrote. ‘I do not seek thus to understand in order to believe, but I believe in order that I may understand.’ A man of the most profound piety, he is reported to have said that, if he had a choice between committing a sin and being condemned to suffer the agonies of hell, he would choose hell.

In 1093 Anselm accepted the See of Canterbury, again reluctantly, and once more in succession to Lanfranc. It embroiled him in years of dispute with two successive English kings, William Rufus and Henry I, largely over the question of how far he and other prelates and abbots owed obedience to the king rather than to the pope. Anselm wanted the church freed of secular control. He tried to resign his see, but the pope would not permit it. He spent several years in exile in Italy, where he completed his most famous work, Cur Deus Homo? (Why Did God Become Man?). The wrangle with Henry was at last settled by compromise at the Synod of Westminster in 1107.

Anselm’s final years were lived at peace in England but, according to the biography written by his pupil and close friend Eadmer, a monk of Christ Church, Canterbury, his health was failing and, too ill to ride a horse, he had to be carried about in a litter. Eadmer had been writing his life of the archbishop for some time when Anselm discovered what he was doing. At first he helped Eadmer with it, but on reflection he insisted that the biography be destroyed because he modestly considered himself too unworthy for future ages to place any value on an account of his life. Eadmer was dismayed, as he greatly admired Anselm and had put much work into the project. He destroyed the pages the archbishop had seen, but fortunately for future ages, only after secretly making a copy of them. At the end of the book he asks his readers ‘to intercede for this and for my other sins’. Medievalist R.W. Southern described the biography as ‘the first intimate portrait of a saint in our history, by an observant pupil and ardent disciple’.

Anselm became so ill that he came to dislike all food, but he ate as best he could to try to keep his strength up. For six months he grew steadily weaker and had to be carried into church every day for Mass. It tired him dreadfully and Eadmer and others tried to dissuade him from doing it, in vain until five days before he died. ‘From this time therefore,’ Eadmer says, ‘he lay continuously on his bed, and though speaking with difficulty, he exhorted all those who had the good fortune to come to him, to live each in his own station for God’. By the Tuesday after Palm Sunday he could no longer speak, but he was able to raise his right hand and make the sign of the Cross when asked for a blessing. He finally passed away at dawn the next day. He was in his mid-70s.

His body was washed and anointed with balsam from a jar which, although it was almost empty, poured out a limitless supply, to the astonishment of Eadmer and others present. Eadmer reports another marvel when the body in its archbishop’s robes was put in a stone coffin that was too shallow for it. There was much argument about what to do until one monk took the pastoral staff of the Bishop of Rochester, who was performing the burial service, and drew it along the top of the coffin. It now turned out to be deep enough, and the body was duly interred.

Anselm presumably died in Canterbury, though Eadmer does not actually say so. He was buried there and by the 1160s, the time of another famously ‘difficult’ Archbishop of Canterbury, Thomas Becket, pilgrims in numbers were visiting Anselm’s shrine in the cathedral.