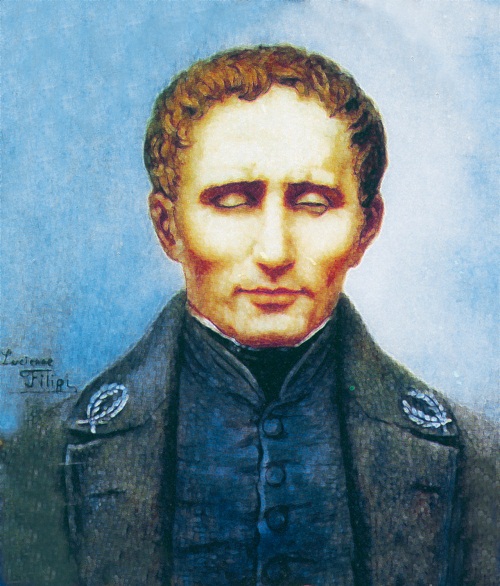 Long before Louis Braille’s time, attempts had been made to create embossed letters or shapes on wood or paper to enable the blind to read by touch. After the Napoleonic Wars, a French artillery officer named Charles Barbier invented ‘night writing’, which used raised dots on cardboard to send written messages on battlefields by night. It was this military system that Braille adapted for the blind.

Louis Braille was born in 1809 at the village of Coupvray, twenty-five miles east of Paris, to a saddler and his wife, who named all their children after kings and queens of France. Blinded at the age of three in an accident with a sharp awl or knife when he was playing with the tools in his father’s workshop, he would never have any memory of being sighted. As a boy he was taught to read by feeling upholstery studs hammered into pieces of wood in the shapes of letters and numbers. In 1819, when he was ten, he was accepted at the Institute for Blind Children in Paris.

At the institute in the rue St-Victor, where the boys and girls were kept strictly segregated, crossed twigs did duty for letters of the alphabet. The food was sparse and the children were underfed, but the nourishing curriculum included Greek and Latin, algebra, geography and music. The school boasted a small orchestra and Louis became a good cello player and organist.

Captain Charles Barbier, meanwhile, was earnestly attempting to interest the French army authorities in his écriture nocturne, in which they steadfastly declined to see any military merit. In the 1820s it occurred to him that it could be used by the blind. He took it to the school in the rue St-Victor, where Louis Braille was one of the pupils enlisted to evaluate it. The students found it interesting, but too rudimentary to be of much value to them. It inspired Louis, however, to work out an improved system of his own, which he completed in 1824 at the age of fifteen. After laborious trial and error he simplified Barbier’s method, using six dots in varying patterns in domino-like ‘cells’, which provided a total of sixty-three permutations for different letters and numbers, and later musical notes. The sixty-fourth permutation, with no dots at all, was the space symbol.

The other pupils at the school took to Braille’s method. Its simplicity made it easy to learn, but the school did not endorse it, principally because money was short and the cost of introducing it prohibitive. Braille became a teacher at the school himself in 1826 and published his method three years later in a typically modest thirty-two-page book, entitled Method of Writing Language, Plain Chant and Music, by Means of Raised Points for the Use of Blind Persons. It was printed in embossed text.
The book made no impression on the wider world and Braille began to show the first symptoms of the tuberculosis that would kill him. He produced an improved version of his system in 1837 and Pierre Foucault, another blind ex-pupil of the school, invented what was in effect the first typewriter for the blind in 1841. But Braille did not live long enough to see the triumph of his system. He died at the school in Paris two days after his forty-third birthday. His brother hired a horse and cart to drive the body back to Coupvray.

On June 20th, 1952, Louis Braille’s remains were disinterred at Coupvray and taken to Paris to be deposited with honour in the Panthéon. The bones of Braille’s hands, however, were separated and kept in a concrete box on top of his empty tomb at Coupvray. The ceremony in Paris was attended by the President of the Republic, Vincent Auriol, and by blind people and delegations from more than twenty countries. In 1841 Braille had told Foucault that access to communication was vitally important for blind people, ‘if we are not to go on being despised or patronised by condescending sighted people. We do not need pity, nor do we need to be reminded that we are vulnerable. We must be treated as equals – and communication is the way we can bring this about.’