Death of Carol II of Romania

The Romanian king died of a heart attack on April 4th, 1953. 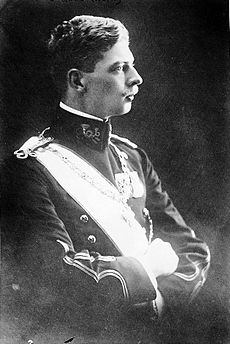 King Carol spent his last years in exile in Mexico and Brazil before buying a villa at Estoril in Portugal. His sudden death there of a heart attack, aged fifty-nine, removed from the scene a Ruritanian figure, who was appropriately the subject of a biography by Barbara Cartland. Dashing, wilful and reckless, a lover of women, champagne and speed, Carol drove racing cars and piloted planes, and on state occasions appeared in operetta uniforms with enough ribbons, chains and orders to sink a small destroyer.

The kings of Romania were originally Hohenzollerns from Prussia. Carol, born in a fairy tale, Zenda-like castle in the Carpathian Mountains, was the son of King Ferdinand and the notorious Queen Marie, a grand-daughter of Queen Victoria. In his twenties he was introduced to a Russian princess with a view to marriage, but they did not take to each other. Instead in 1918, to his family's consternation, he secretly married Zizi Lambrino, a general's daughter. Carol was packed off to a monastery and she was returned to her family. After a time they were permitted to see each other again, and she bore him a son, but he had other liaisons and in 1921 he was persuaded to renounce her and marry Princess Helen of Greece, who also gave him a son, Michael.

Still busily womanising, Carol now found the love of his life, the red-haired, green-eyed Magda Lupescu, low-born Jewish wife of an army officer. Carol ran off to Italy with her in 1925, renounced his right to the throne and took her to live with him in Paris. Princess Helen divorced him in 1928.

Meanwhile, King Ferdinand died in 1927, succeeded by the five-year-old Michael, with a council of regency. There was much talk in Bucharest of Carol's possible return. After consultations with army officers and politicians, he flew to Romania in 1930 and to popular rejoicing seized the throne. Michael was given the title Grand Voevod of Alba Julia and restored to the nursery. Magda Lupescu was installed in a mansion in Bucharest and loaded down with expensive jewellery.

The situation would have taxed a heavyweight. The creation of a Greater Romania after the First World War had fuelled rival nationalist tensions, the court and the whole political system were riddled with corruption and the Romanian fascist party, the Iron Guard, partly financed by the  Nazis, denounced the King as a weakling dominated by his Jewish whore and swore to be rid of her and every Jew in the country. Hitler wanted to draw Romania into the German orbit to get his hands on its oil. He succeeded and in 1940, with a mob baying in the street for his blood, Carol was forced to abdicate in favour of Michael. He took Magda into exile again, along with  servants, three poodles and two pekinese and his stamp collection. He and Magda had to lie on the floor of their carriage when the Iron Guard fired on their train nearing the Yugoslavian border. They spent time in Spain and Portugal before going to Mexico. He had to sell part of the stamp collection to raise funds. The two were married in 1947, when he thought she was dying, but in fact she outlived him by twenty-five years, living on until 1977. Finally in 2003 Carol's remains were taken back from Lisbon to Bucharest to be reinterred.