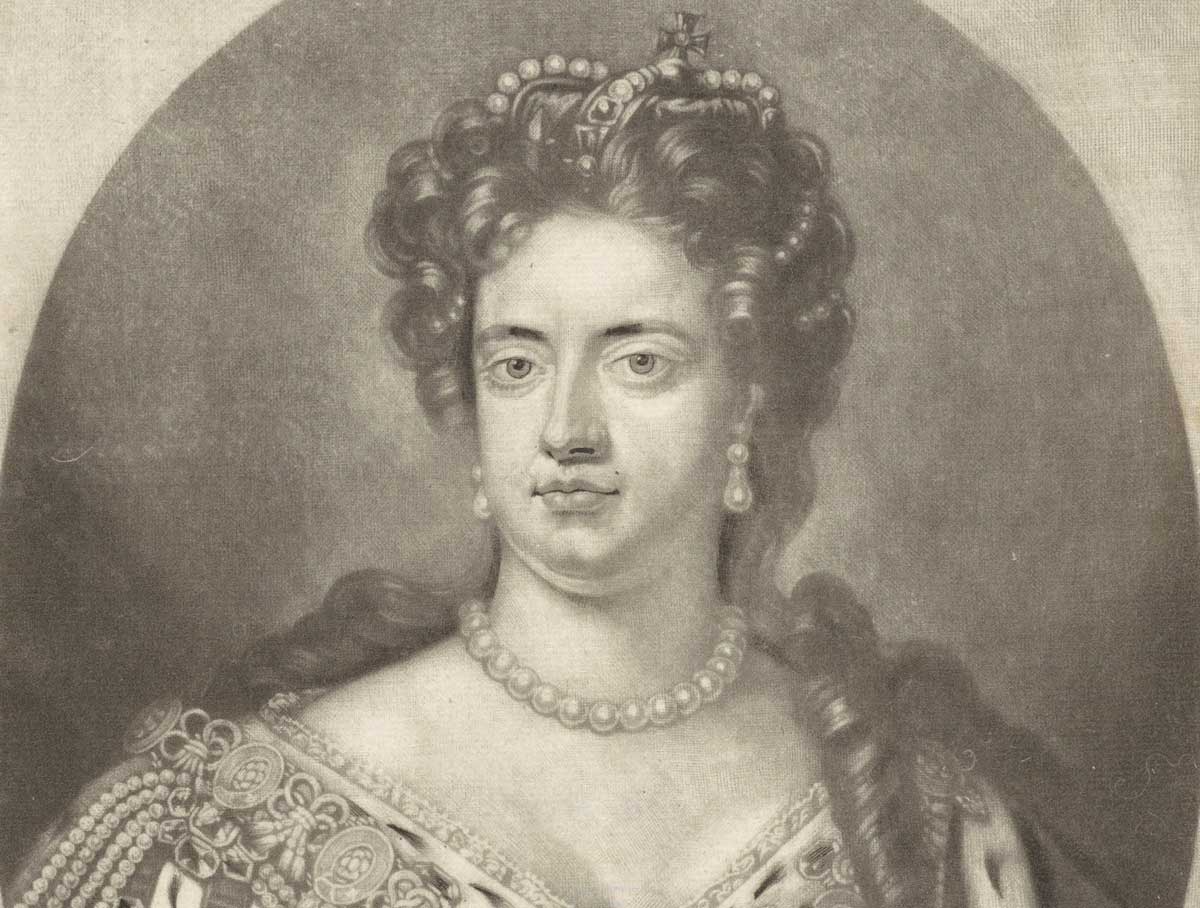 The last of the Stuarts on the English throne, Anne was 37 when she succeeded her brother-in-law William III on March 8th, 1702. She was devoted to her husband, Prince George of Denmark, and he to her, but of their five children by her continual pregnancies, none had survived. Shy, plain, red-faced and dumpy, growing increasingly stout and a martyr to rheumatism, she was not considered intelligent and at this point she was under the thumb of her old friend from school days, Sarah Jennings, the brilliant and strong-minded wife of John Churchill, Earl of Marlborough.

Marlborough had made efficient preparations for the succession with his two principal allies, Sidney Godolphin and Robert Harley. An accession council was held immediately at St James’s Palace in London, at which the new queen promised to continue the late king’s policies. Members of the House of Lords and the House of Commons came to kiss her hand and were graciously received as the heralds proclaimed her in the streets. The principal members of the government were confirmed in office for a month at least. On March 11th, crowned and dressed in red velvet, Anne delivered her first formal speech to Parliament. ‘As I know my own heart to be entirely English,’ she said, ‘I can very sincerely assure you that there is not anything you can expect or desire from me which I shall not be ready to do for the happiness and prosperity of England.’  She had a soft, sweet speaking voice and made a good impression, though she was bashful and blushed so much that unkind observers compared her to the inn sign of the Rose and Crown.

Marlborough was swiftly appointed captain-general of the army and sent off to The Hague to reassure the Dutch. Sarah was made mistress of the robes, groom of the stole and keeper of the privy purse, which put her in control of the royal household. Anne and George established themselves at Kensington Palace and there was much hurrying and scurrying to get everything ready for the coronation, which was set for St George’s Day. A Mrs Banks charged thirty shillings for making the coronation petticoat and Mrs Ducaila, the hairdresser, supplied a wig and false curls along with twenty-four yards of gold ribbon.

When the great day came, the Queen was too lame and unwieldy to walk. Yeomen of the guard carried her to Westminster Abbey in an open chair under a canopy, with six yards of train trailing behind to be managed by the Duchess of Somerset and other ladies. At the church door Anne disembarked from the chair and walked in. According to Celia Fiennes, who was watching, she wore crimson velvet over a golden robe richly embroidered with jewels and a petticoat with bands of gold and silver lace between rows of diamonds, while more diamonds blazed in her hair. She was crowned queen of England, Scotland, Ireland and France at about four o’clock in the afternoon by the Archbishop of Canterbury, Thomas Tenison, with a specially made crown flaming with huge diamonds. The sermon was preached by John Sharp, Archbishop of York, on a text which the Queen herself had chosen: ‘Kings shall be thy nursing fathers and queens thy nursing mothers’ (Isaiah 49:23). Gold medals were scattered about in profusion and the nobility, led by Prince George, did her homage.

Leaving the abbey on foot, ‘with obliging looks and bows to all that saluted her’, the Queen crossed to Westminster Hall, where the traditional coronation banquet was held and the Queen’s champion rode in on horseback to challenge anyone who denied the new monarch’s right to the crown to combat. Prudently, no one did and Queen Anne was able to retreat to St James’s at about half past eight, tired out.

Anne proved to be a far stronger character than anyone had supposed and Sarah Churchill would be sent packing. Winston Churchill, indeed, thought Anne was one of the toughest personalities ever to occupy the English throne. She loved England and was popular with her subjects throughout her reign, to her death in 1714 at the age of forty-nine.