The self-styled tribune of the Roman Republic, Cola di Rienzo, was murdered by an angry mob, on October 8th, 1354. 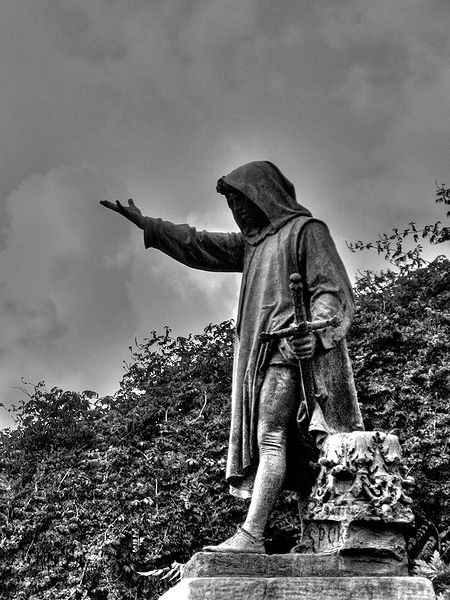 Cola di Rienzo (or Rienzi) was so massively fat that when his corpse was hung up by the feet after his violent death, it was described as looking like a giant buffalo or a cow in the slaughterhouse. His ambitions were as huge as his frame. The son of a Roman innkeeper, he dreamed of restoring the city of his birth to the grandeur of its great days and bringing a new pax Romana to the world. Summoning the people to the Capitoline Hill in 1347, he proclaimed himself dictator and to enthusiastic applause announced measures to curb the noble families which dominated the city. The nobles, led by the Colonnas and the Orsinis, were having none of it and Pope Clement VI issued a bull from Avignon denouncing Cola as a pagan, a heretic and a criminal. Driven out of Rome by the end of the year, he became a hermit for a time before going to Prague to offer his visionary services to the Emperor Charles IV. After protracted correspondence, the bewildered emperor sent him under guard to Pope Clement.

Cola was kept in prison in Avignon, but Clement died in 1352 and two years later the new pope, Innocent VI, sent Cola to Rome on a mission to restore papal authority in the city. Arriving at the beginning of August and resuming his career as dictator, he found himself opposed by the nobles and desperately short of money.

Cola was always highly excitable and now, according to his contemporary biographer, he had become hysterically volatile, laughing one moment and crying the next. To raise money, he levied taxes on wine and salt, which was not popular, and began arresting well-to-do citizens and demanding a ransom for their release. He failed to pay his soldiers, which proved to be a mistake when an angry mob, some of them in the pay of the Colonnas, gathered outside his palace on the morning of October 8th and began hurling stones and bawling for his death. Cola now found himself with no bodyguard. Putting his helmet and body armour on, he went out onto the upper balcony and gestured for silence. He was a magical orator and might well have calmed the crowd down, but they refused to give him the opportunity, grunting noisily like pigs to drown his voice, throwing stones, setting the building’s gates on fire and shouting for his death.

Cola saw it was hopeless and went back inside. He took off his armour, hastily cut his beard, blackened his face with soot and, pretending to be a rustic from outside the city, mingled with the crowd and joined them in bellowing for his own death. He was recognised, however, seized and dragged to the steps of the Capitol. There after a long, grim pause – perhaps to wait for orders? – one man stabbed Cola in the stomach, another in the head and then one after another stabbed him until he was riddled like a sieve. Joking merrily, his assassins dragged the body to the Piazzo San Marcello, near the Colonna palace, where they hung it up for two days while boys threw stones at it. Then on the orders of the Colonnas a fire was made and the corpse was burned to ashes. ‘Because he was so fat,’ his biographer says, ‘he burnt easily and freely’. He was in his early forties. A year later Innocent VI proclaimed absolution for all who had taken any part, openly or secretly, in the murder.