David Anderson looks at the contentious issues raised as Kenya comes to terms with the colonial past.

The end of British colonial rule in Kenya was bloody and brutal. In October 1952 a state of emergency was declared to fight the Kikuyu insurgents known as Mau Mau. The rebellion was defeated by 1956, but emergency powers remained until January 1960.

The British made extensive use of detention without trial and applied the death penalty to a wide range of offences. The official rebel death toll was above 10,000, but the real figure may have been double this, while the rebels assassinated over 2,000 African ‘collaborators’. The story of this struggle has been presented in Kenya as one of nationalist heroism, and in Britain as an episode in the deconstruction of empire: but both views are under challenge.

The Mau Mau veterans’ associations have long hoped to mount a prosecution against the British for war crimes. Though not publicly supporting this, the Kenyan government has recently encouraged this ambition by lifting its prohibition on Mau Mau organizations, which had remained banned for more than fifty years under the old colonial emergency powers regulations. The Kenya Human Rights Commission has taken up the cause. A public enquiry has also begun to investigate the crimes of Kenya’s own governments under Jomo Kenyatta and Daniel arap Moi, and those of the colonial regime.

But the Mau Mau war cannot be reduced to a modern morality tale. This gritty struggle divided the Kikuyu communities of central Kenya: many people were unwilling to support violence, and Kikuyu Christians in particular stood against the rebels. The British nurtured a ‘loyalist’ movement, recruiting more than 60,000 Kikuyu men: much Mau Mau violence was aimed at these ‘collaborators’. Loyalists gained considerably in terms of property, land and political rights, while rebels and their supporters were imprisoned and dispossessed.

The appeal for human rights, the prosecution of war crimes, and reparations acknowledges only one side in the struggle. The civilian victims of Mau Mau atrocities  – of which there were many – have little sympathy for the idea of reparations for Mau Mau fighters. Mau Mau’s claims are made in the name of nationalism, but continue to divide the nation.

Kenya is the latest of many former colonial territories to turn its gaze upon sins of the past. This wave of historical claim-making emerged in 1994 when Africa dominated world news for the best and the worst of reasons. In South Africa, elections brought the apartheid era to an end; in Rwanda, the horror of genocide unfolded.

In South Africa, the Truth and Reconciliation Commission laid bare the injustices of apartheid rule. In Rwanda, reconciliation came slowly, but a determination that there would no longer be a ‘culture of impunity’ around Africa’s atrocities was evident in the commitment to prosecute the genocide’s alleged culprits at a tribunal convened in Tanzania.

Other countries followed these examples. In Namibia, the massacre of the Herero people by the Germans took centre stage in 1904, but the excesses of the nationalist insurgency under the leadership of SWAPO lingered in the wings. In Algeria, admissions by former colonial soldiers that torture was used in the war against the nationalists fanned the flames of debate about the role of Algerians who assisted the French. In Sierra Leone, a truth and reconciliation commission has explored the history of the long civil war, while the intensity of corruption and the looting of the public purse by those in high office in Nigeria has given impetus to historical investigations.

In these examples, demands for reparations and retribution sit uncomfortably alongside a more pervasive public desire simply to know. Claim-making is rooted in a contested politics and nurtured by the fear that the past has been hidden from scrutiny. Kenya is no exception.

The Mau Mau lost their war against the British. They lost the peace, too. Kenyatta had little time for the former ‘freedom fighters’. He often spoke of the need to ‘forgive and forget’, and to ‘bury the past’, but never conceded rights, rewards or genuine compensation to Mau Mau. When asked about the future role of Mau Mau in 1963, his answer was unequivocal: ‘We shall not allow hooligans to rule Kenya’.

Kenya celebrates its independence each year on December 12th, Uhuru Day. This has never been allowed to become a celebration of the Mau Mau struggle: public memories of detention camps, massacres and punishments were suppressed. But recently, the Mau Mau veterans have made themselves heard. Ignoring Uhuru Day, they gather to commemorate their war in February, on the anniversary of the execution of Mau Mau leader Dedan Kimathi.

Kimathi’s memory has become a highly charged political issue. Captured by the British in October 1956, he was executed in February 1957. His remains were deposited in an unmarked grave in the grounds of Kamiti Prison, alongside 1,000 other victims of British judicial execution. The quest to find Kimathi’s grave, and demands to create a place of commemoration, prompted the Kenya government to announce an official search in 2003, and to designate a national site of remembrance in Nairobi’s Uhuru Gardens. Kimathi would be laid to rest in Heroes Acre.

Kimathi’s remains cannot be identified, but the Heroes Acre project has gone ahead. The question now arises as to who should be honoured by burial in this national site of commemoration?

Unmarked graves keep surfacing all over Gikuyuland. Some hold the remains of rebels and suspects killed by the security forces, others the remains of people executed by Mau Mau. Some sites have long been known about, such as Othaya, where rebels killed in an attack on a British police post were buried. Others have been recently rediscovered. Some burial grounds have been protected over the years and local people have prevented development on the land.

Should the bones from all these sites be brought to Heroes Acre? If they are, can the rebels be sorted from the loyalists? Should loyalists be buried in Heroes Acre at all?

The need to tackle these questions has been highlighted by the discovery of a collection of human remains at the National Museum of Kenya, in Nairobi. It is a set of some 475 human skeletons, most showing signs of violent death. With them is an explanatory note: ‘The skeletons of this collection are the remains of Africans (mostly of the Gikuyu tribe) who were killed during the great emergency of 1952-1960. They were uncovered and exhumed by the police and were then used as evidence against the Mau Mau by Her Majesty’s Police. This collection was generously donated to Dr Leakey by Dr Morris Rogoff, then the Chief Police Pathologist.’

Most of those exhumed had been victims of Mau Mau assassinations, their bodies pushed down latrines or buried in shallow graves, to be found in subsequent police investigations. As evidence was gathered, some of the murders relating to these skeletons came to trial. But after the cases were heard, no one asked the relatives to collect the remains, which were kept by the pathologist until he finally gave them to Louis Leakey at the Museum.

And that is where they still lie. Each one, whether loyalist or rebel, is a victim of Kenya’s struggle for independence. They should all now be properly buried, and Heroes Acre would seem as good a place as any. Though this would get Mau Mau’s veterans no closer to achieving reparations, it might bring the Kenyan nation closer to reconciliation. It would seem an appropriate act in Africa’s age of atonement.

David Anderson is author of Histories of the Hanged: Britain’s Dirty War in Kenya and the End of Empire (Weidenfeld & Nicolson, 2005). 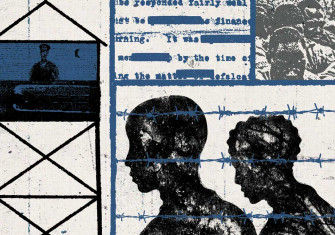 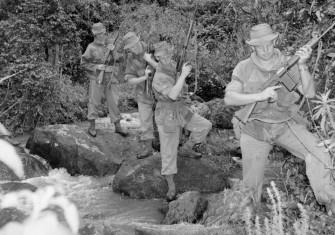 History is Never Black and White