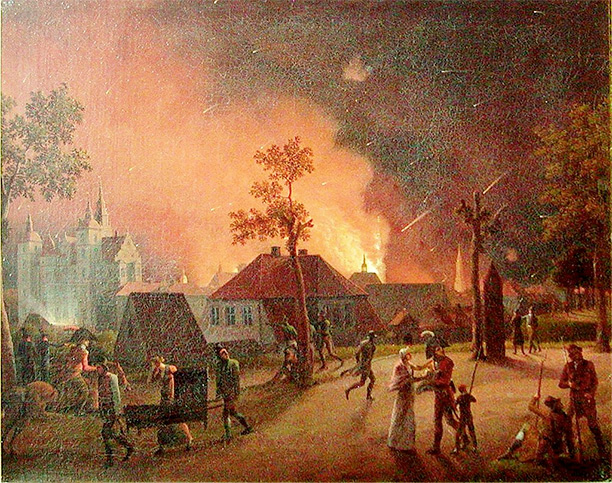 The British had shelled the Danish capital before, in 1801, but the second onslaught was even more devastating. The Danes had repaired their city and their fleet in the meantime, but late in July 1807 the new British Foreign Secretary, George Canning, received intelligence that the Franco-Russian alliance signed at Tilsit had included a secret agreement to force Denmark and Sweden into Napoleon’s continental blockade of British trade. There was clearly a possibility of Napoleon seizing the Danish fleet, and Canning sent troops to the island of Zealand, ready to besiege Copenhagen, while a fleet of warships under Admiral James Gambier, amply equipped with bomb vessels, sailed menacingly up The Sound between Copenhagen and Sweden.

A singularly undiplomatic diplomat called Francis Jackson was sent to suggest to the Danes that they put their fleet into British hands for the duration, to be returned to them at the end of hostilities with France. A fee of £100,000 was offered, but the Danes were not receptive to the idea, so British troops under Lord Cathcart, with Sir Arthur Wellesley (the future Duke of Wellington) in command of a division, set siege to Copenhagen from the land side. The army brought its field artillery into play, while the British battleships and bomb vessels were brought into action on the water. The city was struck by a storm of fire from all sides until the 5th, with more than a thousand buildings destroyed and many people killed or wounded, when the Danes sent out a flag of truce. The British stopped the bombardment on condition of the immediate surrender of the Danish fleet. British sailors rigged some fifteen Danish battleships, fifteen frigates and thirty brigs and gunboats, which they cheerfully sailed off to England with in October.

Canning had considered keeping a force in Denmark to prevent the Russian fleet from leaving the Baltic, but thought better of it under pressure from the commanders on the spot. Even so, his actions came in for fierce criticism in Parliament, where he defended himself with mesmerizing brilliance. ‘He leaped about,’ Sydney Smith said, ‘touched facts with his wand, turned yes into no and no into yes.’

Canning would be prime minister in 1827. Gambier was given a peerage and ended his days as  president of the Church Missionary Society.