The English social reformer was born on January 24th, 1800. 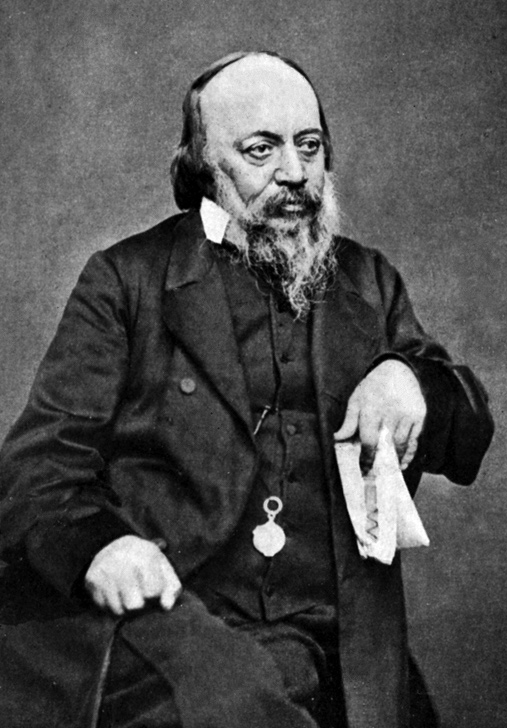 Edwin Chadwick was a civil servant, not a Member of Parliament, but he may have had more influence on more people’s lives for good and for ill than all Britain’s Victorian parliamentarians put together. Described by his friend J.S. Mill as ‘one of the organising and contriving minds of the age’, he had a hand in many of the major Victorian social and administrative reforms . He was the principal author of the 1842 report on The Sanitary Condition of the Labouring Population that spurred on the improvement of sanitation, drainage, water supply and refuse disposal in the principal towns, which were in a thoroughly squalid state as a consequence of huge population growth. He took a leading part in this initiative as one of the four commissioners of the Board of Health apointed in 1848.

Chadwick was not an easy man to work with or to like. Impatient if crossed, he had a formidable physical presence, driving energy, a coldly logical intellect and an inability to suffer fools. Dogmatic and convinced of his own rightness, he was a workaholic and his enthusiasm for improvement in public health and administration seems to have had far less to do with any humanitarian impulse than with his intolerance of inefficiency. Touchily sensitive to any criticism of himself, he had no sense of humour and no interest in art or music.. A disciple of Jeremy Bentham and a prime mover in putting Benthamite ideas into practice, he played a heroic role in making British towns safer and better places to live.

Little is known of Chadwick’s private life. He was born in Lancashire, at Longsight, outside Manchester, the son of a radical journalist, who had him educated at home. It was not a loving family, apparently, and he later complained that he only heard from most of his relatives when they wanted money. He started his career as a lawyer, but soon attracted the attention of Bentham and became his secretary. In 1832 he was employed by the Royal Commission on the Poor Laws and he and Nassau Senior, a leading economist, wrote the Commission’s report, which led to the Act of Parliament of 1834. The system of poor relief then in force was directed mainly at helping the indigent in their own homes. It was Chadwick and his allies who introduced the new regime of sending the poor into workhouses, though Chadwick was dissatisfied because he wanted the system operated by officials responsible to a central authority instead of local boards of guardians.

Chadwick was a lifelong advocate of centralisation and the employment of trained expert officials. ‘Sir,’ he once magisterially observed , ‘the Devil was expelled from heaven because he objected to centralisation and all those who object to centralisation oppose it on devilish grounds’. He had no confidence in local self-government and a devastating contempt for democracy and public opinion. One of the main functions of the new poor relief system was to save money, for the cost of caring for the poor had risen alarmingly. The new workhouses were designed to deter shirkers and malingerers, and conditions in them were deliberately made worse than conditions outside. They were to be, as Chadwick put it, ‘uninviting places of wholesome restraint’. The system had earned a grim reputation for unfeeling harshness by the time it was swept away in the early 1900s.

The workhouses made Chadwick one of the most unpopular men in the country. At the Board of Health he was attacked as ‘the autocrat, pope, grand lama of sanitary reform’ and he made so many enemies in Westminster and Whitehall that Lord Palmerston pensioned him off in 1854. He lived on for many years, issuing a blizzard of pamphlets and corresponding with influential figures at home and abroad to spread the gospel of sanitary and administrative reform, before some measure of official reward was made to him at last in his old age, in 1889, when he was knighted and the Association of Sanitary Inspectors of Great Britain gave him a banquet. He died the following year, at the age of 90. ‘Had he killed in battle as many as he saved by sanitation,’ the Daily News observed, ‘he would have had equestrian statues by the dozen put up to his memory.’