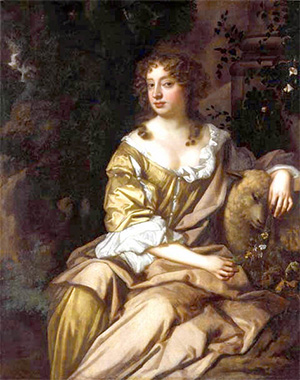 London, Hereford and Oxford have all laid claim to Pepys’ ‘pretty witty Nell’ – he also called her ‘a bold merry slut’ -- but she was probably a native Londoner, born close to the scene of her future triumphs, in a squalid back alley called Coal Yard, off the northern end of Drury Lane. The date of her birth comes from her horoscope, which was drawn up years afterwards. A modern reading of it would endow her with sex appeal, charm, self-confidence, gregariousness and a ready wit – all of which the grown Nell amply demonstrated, along with a delectable figure, excellent legs and fashionably tiny feet.

Very little is known about Nell’s life. She grew up carrying drinks to customers in a brothel, which may have been owned by her brandy-soaked mother, who toppled drunkenly into the river one day in 1679 and drowned. Nell’s father was apparently a broken-down Welsh army officer, who died in prison for debt. There was an elder sister, Rose, who married a highwayman and spent time in prison for theft. At thirteen, Nell got a job as an orange girl at the newly opened King’s Theatre in Drury Lane (forerunner of the Theatre Royal), where she developed her gift for quickfire repartee.

For a spirited slum girl with looks, intelligence and ambition, it was a promising start. Nell quickly graduated from the pit to the stage, making her first appearance when she was fourteen and it was still a novelty for female parts to be played by women. She was soon a popular favourite in light comedy, starring opposite the actor Charles Hart, who was her lover, and scoring a triumph in Dryden’s Secret Love in 1667. She soared swiftly to the top of the social ladder. After an affair with the rakish Lord Buckhurst, she fell into the arms of Charles II himself. With characteristic wit she called him her Charles III, as both Hart and Buckhurst were named Charles too.

She was still only seventeen, to the king’s thirty-seven, and she continued her successful stage career until after the birth of her first son, yet another Charles, and the future Duke of St Albans, in 1670. The king gave her a grand house at 79, Pall Mall, where John Evelyn saw her one day leaning over her garden wall chaffing her royal lover, who was standing below in St James’s Park. Nell had a magnificent silver bed in the house, adorned with the king’s head and figures of cupids and slaves, as well as crowns and eagles. Other treasures included a warming pan inscribed ‘Fear God and serve the King’.

Nell’s sauciness, cheerfulness, lustiness, straightforward good nature and lack of affectation evidently came as a relief to Charles, as did her lack of any serious interest in politics. Unlike many of his other mistresses, Nell seems to have been completely faithful to him and when he lay dying, in 1685, the King told his brother and heir, the future James II, not to let poor Nelly starve. Starve she did not, but she outlived her third Charles by only two years and died in her Pall Mall residence in 1687, only thirty-seven years old. She was buried in St Martin’s-in-the- Fields in the same grave as her mother and at her funeral she drew a large audience for the last time. The sermon was preached by a future Archbishop of Canterbury, Thomas Tenison, who praised her kindness to the poor and found much good to say of her.