The Birth of Mozart

The prodigious composer was born in Salzburg on January 27th, 1756. 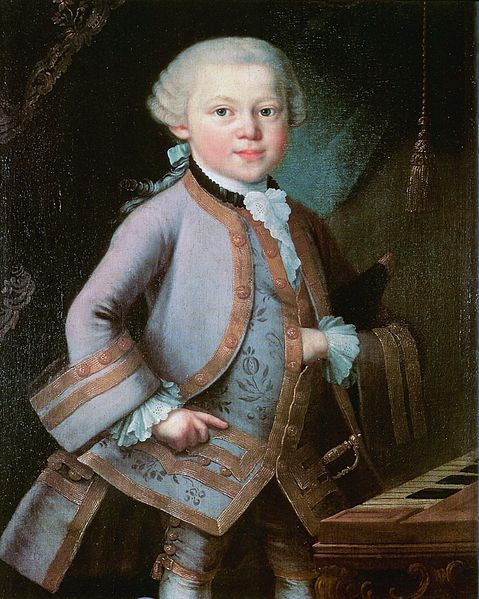 Starting life with an ample supply of both genius and Christian names, Joannes Chrisostomus Wolfgang Gottlieb Mozart was born at eight in the evening in his family’s third-floor apartment  at 9 Getreidegasse in Salzburg. He was christened in Salzburg Cathedral at ten the next morning, so perhaps his parents were anxious about him. They had had six children before and only one of them had survived.

The baby was born on the feast day of St John Chrysostom and Wolfgang was his maternal grandfather’s name. Gottlieb, his godfather’s surname, was later translated into Theophilus or  Amadeus, which the grown Wolfgang would use only in jest. Sigismundus, which he thought equally comic, was added at his confirmation.

Salzburg was not part of Austria at this time, but was ruled by its own prince-archbishop. The new baby’s father, Leopold Mozart, a German from Swabia originally, was a violinist at the prince-archbishop’s court. He was thirty-six and the baby’s mother, Maria Anna, was thirty. They had been married for fifteen years and Wolfgang would be their last child.  Leopold was a respected musician, conductor, composer and teacher. In the year of Wolfgang’s birth he published what became a standard book on the technique of playing the violin and the following year he was appointed court composer.

Having an infant prodigy in the family is not easy, nor, probably, is being one. Little Wolfgang started to pick out notes on the piano at the age of three, learned the organ and the violin at four and began composing music at five. He had astonishingly precocious gifts for sight-reading and improvization. To make things more difficult,  his  sister  Maria Anna, known in the family as Nannerl, was an exceptionally good pianist.  She had to learn to play second fiddle, as it were, to her amazing brother, four  years younger.

Leopold Mozart was a man who worried a good deal, about his health if nothing else was available. He was determined to develop his two children’s talents to the maximum, to make money and raise his social status, but also because he saw it as his duty to them and to the world.  Giving up his own composing, he was a demanding taskmaster, forever  carping  at the children’s laziness, frivolity and irresponsibility  -  especially Wolfgang’s.  Their mother, who fortunately for herself was fond of music, was a kindlier presence, but she deferred in all things to her husband.

From the ages of five to fifteen, Wolfgang was in Salzburg for less than three years altogether, as  Leopold took the children and sometimes their mother on a succession of tours. Europe was at peace, the children’s reputation preceded them and the fashionable world flocked to see them. The family troupe went to Munich and Frankfurt, Geneva and Zurich, The Hague and Brussels. Goethe heard them and was hugely impressed. In Vienna they played for the Empress Maria Theresa and the imperial family, including the future Marie Antoinette of France.  After a seasick Channel crossing to England in 1763, they performed for  George III and Queen Charlotte, and a musical expert called Daines Barrington set the seven-year-old Wolfgang exhaustively difficult sight-reading tests, which he sailed through with the utmost ease. At Versailles  Queen Marie Leczinska chattered to him in German and  fed him titbits with her own hand. In Italy  he was honoured by Pope Clement XIV.

Fortunately, Leopold and Wolfgang both readily picked up foreign languages, and the whole family had stamina. They coped with smallpox and various childhood ailments and with fleas and bugs in the beds at inns.  Young Wolfgang, as his father said, was bewitching. Aristocratic ladies loved to cuddle him,  and he showed his annoyance when Madame de Pompadour didn’t. He was bright and bumptious and bouncy, and people noticed that he seemed desperate to give and receive affection, as if he was short of it. So brilliant were his performances that critics and rivals started a whispering campaign that the thing was somehow a fake. That there was no fake would become abundantly evident. Infant prodigies often burn out. Mozart did not. 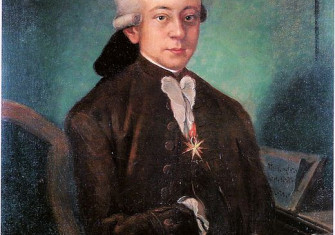