The Beijing to Paris Motor Race

Richard Cavendish describes the motor race to Paris which set off from Beijing on June 10th, 1907. 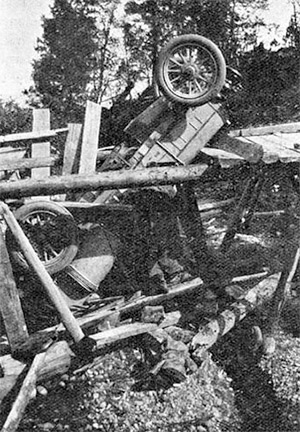 The epic event was not originally intended to be a race, but a demonstration of the potential of the automobile. It was set off by the French newspaper Le Matin, which proclaimed in January 1907 that a man with a car could do anything and go anywhere. ‘Is there anyone who will undertake to travel this summer from Beijing to Paris by automobile?’ The idea attracted great public interest and forty entrants, but in the end only five teams shipped cars to Beijing. The cars were an Itala driven by Prince Scipione Borghese of Italy, a Dutch Spyker driven by an unknown named Charles Goddard, a three-wheeler Cyclecar piloted by Lily Pons’ father and two French De Dions. Rival tyre companies sponsored the competitors, Pirelli backing Borghese, Michelin behind Goddard and Dunlop backing the De Dions.

The official who started the race in Beijing returned to Paris by sea and arrived there before the contestants did. Prince Borghese was driving a machine stripped down to the lightest possible bodywork with a seven-litre Itala engine installed in it. Charles Goddard, who had not even learned to drive before his imagination was fired by the event, had to borrow his car for the race and pay his way to China by playing the piano to the first-class passengers on the ship. The route led from Beijing through deserts, mountain passes and steppes to Outer Mongolia and Ulan Bator, past Lake Baikal to Moscow and then across Russia, Poland, Germany and Belgium to Paris. Prince Borghese, who was well ahead, made a detour to St Petersburg for a party. There were often no roads, no petrol stations and no one who had ever seen a motor car before. Camels and mules were sent ahead to establish petrol depots and each driver was accompanied by a journalist, who filed a report whenever they passed a telegraph station.

The Cyclecar came to grief in the Gobi Desert and the Itala at one point fell through the planks of a bridge into a ravine, though the engine did not miss a beat. At another stage Prince Borghese had to get a wooden wheel made by a local blacksmith. He arrived at the finishing line in Paris at 4.30pm on August 10th to a huge ovation and a dinner was given in his honour, attended by the Italian chargé d’affaires and prominent automobile industry figures. Charles Goddard came second in the Spyker and the others nowhere.