In the Shadow of the Poor Law

Britain has been a high inequality, high poverty nation for most of the last 200 years. 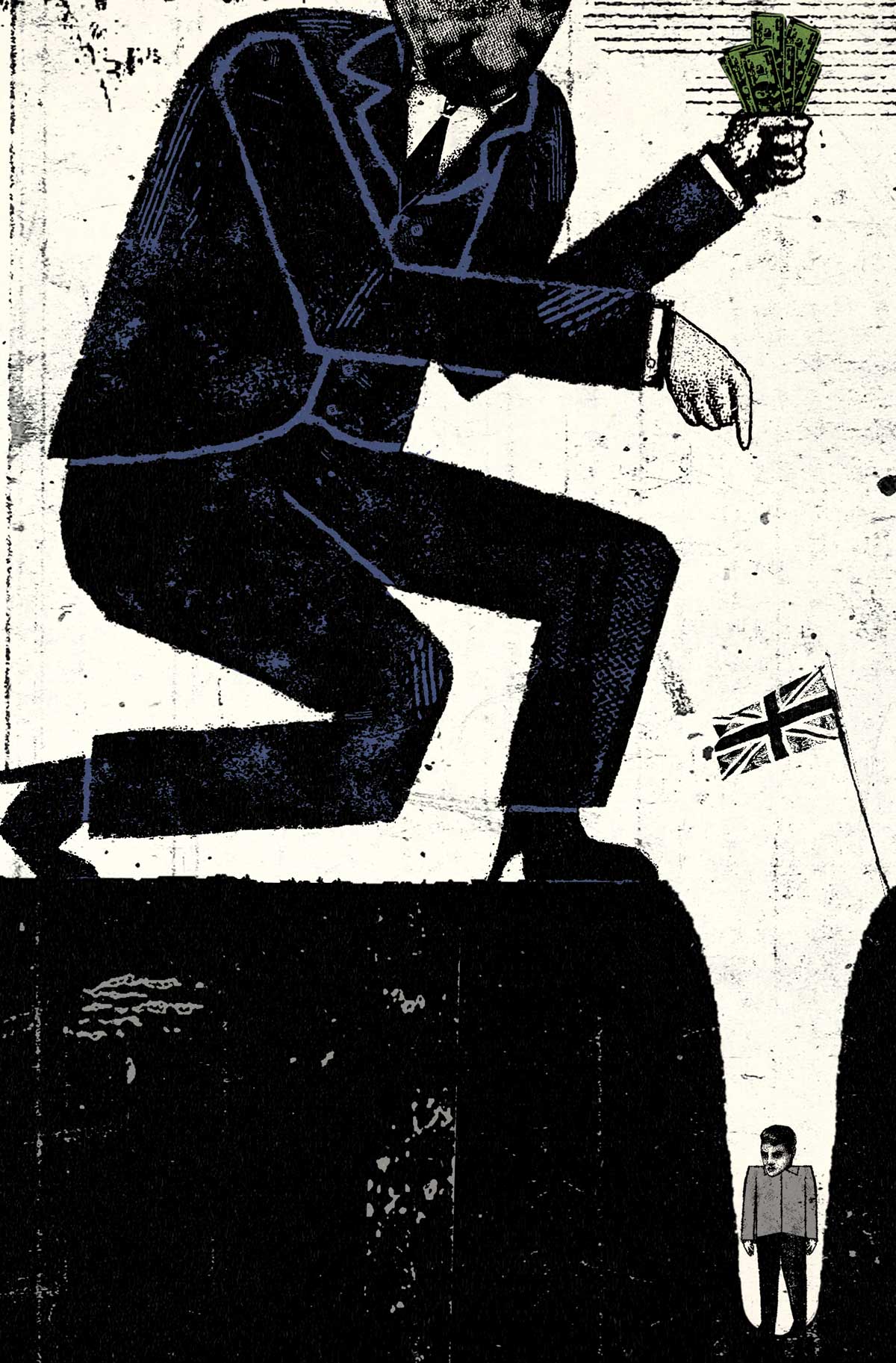 Shortly before the 1979 general election the Labour Prime Minister Jim Callaghan presciently warned of a ‘sea- change in politics’ in favour of Margaret Thatcher’s anti-welfare agenda. Today there is much speculation of a similar shift away from the small state, austerity politics of the last decade. With hikes in levels of public spending and taxation, the Guardian has talked of the emergence of a ‘new variant of capitalism’ and the New Statesman of a ‘new Toryism’.

The last century has seen two tectonic about turns in governing philosophy. The first came in 1945 with the reversal of the ‘hands-off’ economic and social doctrines of the previous century. The second came gradually from 1979 onwards when Margaret Thatcher turned her back on postwar social democracy. So, is history, as some are hoping and others fearing, turning again? Or are we witnessing a mere political tweak, a temporary, pragmatic response to a national crisis? As the economist Robert Lucas Jr. once observed, ‘We are all Keynesians in a foxhole’.

There is no better litmus test of whether history is truly turning than what happens to Britain’s deep-seated divisions. Few trends better illustrate the profound differences between the ideological outcomes of the post-1945 and post-1979 shifts. The first took Britain to peak equality and a historic low for poverty. The second triggered a remarkable doubling in the rate of poverty over the last four decades.

Poverty and inequality are umbilically linked. Poverty occurs when sections of society have insufficient resources to be able to afford a minimal acceptable standard of living. Its scale is ultimately determined by how ‘the cake is cut’. History is clear: high levels of poverty and inequality have gone hand in hand. Barring the short postwar period, Britain has been a high inequality, high poverty nation for most of the last 200 years. Ultimately, how the cake is cut depends on the strength of democratic structures, the power of social movements and the lengths to which business and financial elites have been prepared to go to preserve their wealth, power and privileges. In recent decades, as in the period up to 1939, these factors have worked in favour of those with capital and against the interests and life chances of those without.

Breaking the long high poverty and high inequality cycle requires, as the Liberal politician Sir William Beveridge declared in his 1942 Report, Social Insurance and Allied Services, much more than ‘patching’. 2022 marks the 80th anniversary of the Beveridge Report, which helped launch a more secure and comprehensive system of social security. Beveridge hoped that his path-breaking recommendations – a more effective system of National Insurance, family allowances and a national assistance safety net, as well as free healthcare and full employment, would ensure that no one fell below an acceptable minimum. But his hopes, shared by the Labour leader Clement Attlee, have never been fully realised. The surge in poverty over the last four decades has been driven by the steady dismantling of parts of the postwar social and economic settlement, resulting in today’s mean, patchy and highly punitive system of social support.

In some ways the dark shadow of the Victorian ‘Poor Law’, more anti-poor than anti-poverty, remains a key driver of social policy. In the 19th century, poverty was widely seen as the product of God’s will, or of indolence. For some, the poor were necessary to provide labour and sustain elite power. ‘Poverty is a most necessary and indispensable ingredient’ declared Patrick Colquhoun, founder of the police force in England in 1800, ‘since without poverty there would be no labour, and without labour there could be no riches, no refinement, no comfort, no benefits to those who may be possessed of wealth’. Help for the destitute was confined to the harshness of the 1834 ‘Poor Law’, which ended the previous system of ‘outdoor relief’ that topped up low wages. The aim was to prevent starvation, not poverty, and to promote the Victorian ideology of individual responsibility and self-help. Those at risk went to considerable lengths to avoid the workhouse taint of pauperism. The Poor Law’s central principle was that workhouse conditions should be worse than the lowest living standards available to a working labourer. The moral shame attached to seeking relief was a deliberate attempt at deterrence. Workhouse conditions were often draconian, with bad food, strict discipline and high rates of child mortality. Families were desperate to avoid the hated institution.

There are remarkable parallels between the Victorian age and today in the way state policy addresses poverty. At least three of Beveridge’s ‘five giants on the road to reconstruction’ – want, ignorance and squalor – have yet to be banished. Poverty has been ‘normalised’. Work, as in the 19th century, has stopped offering a guaranteed route out of poverty. Today’s state institutions, such as the Department for Work and Pensions’ network of Jobcentres, are viewed as alien and coercive by large numbers who seek their help. Contemporary tax laws barely differ from the lax approach to tax collection from the rich applied by the Inland Revenue in the 1920s. Despite its impact on revenue, widespread avoidance by wealthy business magnates carried little social stigma. With no effective legal or reputational sanctions against avoidance, paying full tax rates became largely voluntary, just as it is today. As The Times put it in 1938, outside of the United States, ‘England offers the most opportunity of any country for such avoidance’.

Today, as then, a plethora of charities and a small army of volunteers have emerged to prop up an enfeebled welfare system. While the state continues to play the principal role, charitable groups – which also played a dominant role in Victorian welfare support – have taken on the role of what the 18th-century British politician and philosopher Edmund Burke once called the ‘little platoons’.

Today’s extractive model of capitalism – one in which a small elite of capital owners is able to use its political and economic muscle to secure an excessive slice of the economic pie – is the latest incarnation of the ‘collective monopoly power’ of the 19th century.

In recent decades, negative portrayals of claimants have become more frequent and strident. Old distinctions between the ‘deserving’ and ‘undeserving’ poor have been dressed up by ministers in new language: ‘workers and strivers’ against ‘shirkers and skivers’. Ministers have turned to past explanations for inaction: that poverty is the product of individual failure; that low benefit levels are necessary to encourage the work ethic. In 2012 the Chancellor of the Exchequer George Osborne told the Conservative Party conference, to cheers: ‘Where is the fairness, we ask, for the shift-worker, leaving home in the dark hours of the early morning, who looks up at the closed blinds of their next-door neighbour sleeping off a life on benefits?’

The use of the word ‘scrounger’ in UK newspapers grew fourfold in the decade to 2012. Television producers dreamed up programmes, such as Channel 4’s controversial 2014 series Benefits Street, that treated poor families as entertainment. These stand in sharp contrast to the trenchant social and politically engaged content of earlier television drama, such as the BBC’s 1970s’ Play for Today series to Boys from the Black Stuff in the 1980s, which explicitly set out to ‘rattle the cages of the establishment’. New housing developments have incorporated separate ‘poor floors’, ‘poor doors’ and even play areas to segregate buyers of luxury private flats and social housing tenants.

In a return to the punitive policies of the distant past, the middle years of the 2010s saw more than five million state sanctions imposed on benefit claimants, two thirds of whom were left without an income. At one point, the Department for Work and Pensions was levying more fines through local Jobcentres than the mainstream justice system.

Since the postwar social experiment – a period of egalitarian optimism – the fierce battle for ideas has been won by New Right thinkers and mainstream economists, who hold that inequality is necessary to drive economic progress. Sir Keith Joseph, a key adviser to Margaret Thatcher, put it bluntly in 1976: ‘The pursuit of income equality will turn this country into a totalitarian slum.’ A year after the 2008 global financial crisis, Lord Griffiths, the vice-chair of Goldman Sachs International, told an audience at London’s St Paul’s Cathedral that the public has to ‘tolerate inequality as the price to be paid for prosperity’.

The modern Labour Party also seems less sure about its former egalitarianism. ‘The commitment of the Labour Party to equality is rather like the singing of the Red Flag at its gatherings’, wrote the economist Tony Atkinson in 1983. ‘All regard it as part of a cherished heritage, but those on the platform often seem to have forgotten the words.’ New Labour’s ambitious goal to abolish poverty from the millennium failed in large part because Tony Blair allowed Britain’s inequality-driving and stability-sapping model of capitalism to continue.

Despite talk among commentators of a shift towards a softer governing philosophy, there are no signs that tackling poverty and inequality are to become a priority. Both remain baked into the inequality-driving practices of big business and the uneven division of gains from economic activity. In contrast to the war years, there is no serious government thinking about a vision for a post-crisis society. The much-vaunted ‘levelling up’ commitment has been dismissed by one commentator as a ‘slogan in search of a policy’.

Up to 1945, alongside the Beveridge blueprint for social security, there was a flood of reports, action and bipartisan legislation on issues such as schooling and child care and achieving full employment.

A proper test of a paradigm shift must be evidence of a change in the way rich and poor citizens are treated. The governing philosophy of recent times fails such a test. The last decade has seen one promise after another, from David Cameron’s pledge for an ‘all-out assault on poverty’ to Theresa May’s plan to end ‘burning injustice’. Yet little more than patching seems to be on the horizon. Without something closer to the transformative politics of 1945, the post-Covid society will look much like the old.

Stewart Lansley is the author of The Richer, The Poorer: How Britain Enriched the Few and Failed the Poor. A 200 Year History (Bristol University Press, 2021). 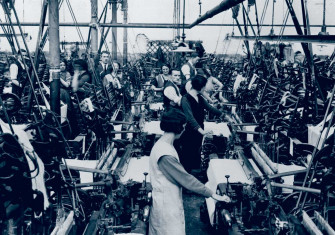 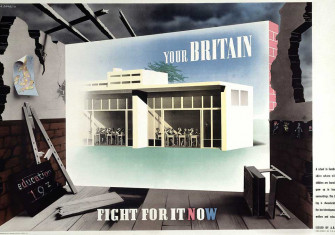 The Establishment of the Post-War Consensus, 1954-64