The Battle of Narva

A key battle in the Great Northern War was fought on November 29th, 1700. 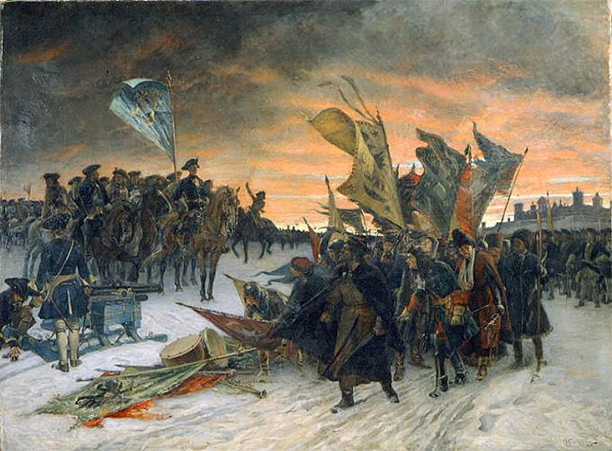 Peter the Great’s decision to join the Great Northern War when he did appeared to be a catastrophic mistake. Like many of his predecessors, the Tsar was determined to gain access to the Baltic. His way to the sea was blocked by the Swedes, who occupied Finland and the isthmus of Karelia, and Ingria, Estonia and Livonia to the south. So in 1699 Peter forged an alliance with Denmark, which then controlled Norway, and the King of Poland, who was confusingly the Elector Augustus the Strong of Saxony. His party piece was to roll a silver plate into a tube with one hand and the Poles had installed him as king two years before.

The allies expected easy pickings and Augustus stretched out his massive paw to roll up Livonia, which he invaded in February 1700. The Swedes under the ferocious teenager Charles XII, however, had the most formidable army in Europe. With assistance from British and Dutch warships, they attacked Copenhagen and forced the Danes to make peace and pay an enormous fine. On the very day of the Danish capitulation in August, Tsar Peter declared war. He could hardly have chosen a worse moment. Charles moved on into Estonia, where the Russians were besieging the fortified town of Narva in a sea of mud. News of the Swedish approach made the Russians nervous and the fact that the Tsar decided to leave the scene that night and take his commanding general with him did not ease their fears.

It is not clear whether Peter ran because he was scared stiff or whether he went away to gather reinforcements. The Swedes attacked the next day, at two o’clock in the afternoon in a blinding snowstorm. There were 40,000 Russians and only 10,000 Swedes, but Charles’s army charged full tilt at the Russian lines and in half an hour drove them in a panic-stricken rout. Many of the Russians were captured, some were drowned trying to get away across the Narva river and some took the opportunity to murder their officers. The Swedes took the entire Russian artillery train and inflicted more than 8,000 casualties, losing only 700 men of their own.

Afterwards Peter maintained that this overwhelming defeat had been a blessing because it forced him to take vigorous action to create a modern army, which he did, but the Swedes gave him time to recover by attacking Augustus in Poland. Taking Warsaw and Cracow, they devastated the country and in 1704 forced Augustus to abdicate. In 1706 Charles invaded Saxony itself. Meanwhile Peter, who had paid Augustus lavishly to keep the Swedes occupied, was melting down church bells to make new artillery, creating new industries to supply armaments, and building a Western-style army. Peter invaded Ingria, began the building of St Petersburg in 1703 and led a boat attack on two Swedish warships in Russia’s first ever naval victory.

The Russians took Narva the following year and when Charles invaded the Ukraine in alliance with the Cossacks, the new Russian army inflicted a crushing defeat on the Swedes at Poltava in 1709 which effectively destroyed the Swedish Empire. Charles himself was wounded and had to take refuge in Turkey. The Russians captured numerous Baltic fortresses the following year and when peace treaties were finally signed in 1719-21, Russia acquired south-eastern Finland, Karelia, Estonia and Livonia. Peter’s Russia emerged as a great European power and the days of both Sweden and Poland as major powers were over.