The Battle of Copenhagen

Richard Cavendish marks the anniversary of an important Scandinavian battle, which took place on April 2nd, 1801. 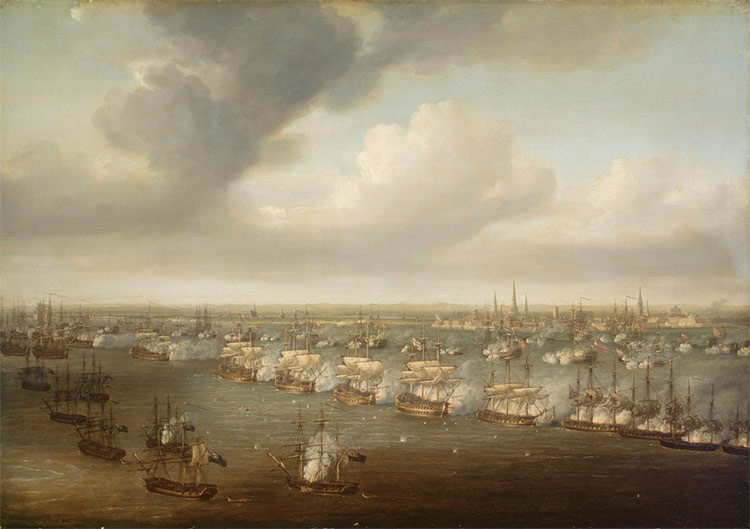 The most famous act of insubordination in the annals of the Royal Navy occurred when Vice-Admiral Lord Nelson, second-in-command of the British fleet at Copenhagen in the 74-gun battleship Elephant, put his spyglass to his blind eye and said to Elephant’s captain, the future Admiral Sir Thomas Foley, ‘I really do not see the signal.’ The signal was from  his commanding admiral, Sir Hyde Parker, ordering him to disengage and Nelson, who thought Parker out of touch, had no intention whatever of obeying it.

Britain and Denmark were not formally at war, but the British fleet had sailed to deter the Danes and Swedes from allying themselves with the French. The ships reached the northern point of Jutland in whirling snow on March 18th and moved on down the Kattegat. Several days passed while an ultimatum was sent to Copenhagen and rejected. Then Nelson’s bold plan of attack was accepted and with a fair wind on the 30th the whole fleet of fifty-two ships, their towering white sails gleaming in the sun, passed through the narrow gap between Sweden and Denmark, to a harmless cannonade from batteries at Elsinore on the Danish bank. They anchored some five miles from Copenhagen and Parker, Nelson and other senior officers took a schooner to survey the city’s defences. The harbour was protected by shoals, by seventy or more heavy guns in the Trekroner fort and by the cannon of nineteen dismasted warships moored in a line a mile-and-a-half long. Nelson decided to attack from the weakest, south-eastern end of the Danish defences and spent hours in small boats planning exactly how buoys should be placed to guide his squadron through a narrow and dificult channel for the attack. After a conference in Parker’s flagship, the London, on the 31st, the buoying work was completed and on April 1st Nelson in infectiously high spirits entertained his captains to dinner in Elephant.

Next morning the wind was fair, but several ships’ pilots – ‘with no other thought than to keep the ship clear of danger and their own silly heads clear of shot’, Nelson commented – flatly refused to lead the way along the channel because it was too dangerous. Eventually a veteran of the Nile, the master of the Bellona, volunteered for the task and at 9.30 the squadron set off – twelve ships of the line plus frigates and bomb-ketches. They were roughly handled by the Danish guns and three grounded on the shoals, but after a masterly display of cool seamanship the rest anchored in line and brought their broadsides to bear. They blazed away at the moored Danish ships with clinical precision, each firing a broadside every forty seconds at a range of 200 yards. The Danes replied with vigour and tenacity. Smoke billowed round the two lines of ships while the guns thundered and crowds of Copenhagen citizens watched from rooftops and church towers

About 1.30 in the afternoon, when a cannon ball struck splinters off Elephant’s mainmast, Nelson remarked that it was warm work, but he would not be elsewhere for thousands of pounds. It was at this point that he declined to see Parker’s signal, saying, ‘You know, Foley, I have only one eye. I have a right to be blind sometimes’, and archly putting his glass up to his right eye. Parker, in fact, had expected Nelson to ignore the order if he judged it right to continue the action.

By about 3pm the Danes were almost overwhelmed. The carnage in their ships was dreadful, with many of them on fire, and the Danish flagship blew up. Some struck their colours and the arrival on the scene of the two leading ships of Parker’s division caused more to surrender. Nelson offered a truce, which the Danish commander accepted, and the action was over by 4pm. The British losses in killed and wounded were about 1,000 and the Danish casualties were thought to be twice as heavy. Next day, which was Good Friday, Nelson went ashore to be received at a state dinner by Crown Prince Frederick of Denmark. There was some apprehension about how the people of Copenhagen would treat him, but he was greeted with what one of his party described as ‘an admixture of admiration, curiosity and displeasure’. At the dinner he told his hosts that the French would not have lasted for one hour at the most, where the Danes had resisted bravely for four. He made an excellent impression and an armistice was signed on the 9th.