Roger Hudson on the circumstances behind an eviction in County Clare, Ireland, photographed in July 1888. 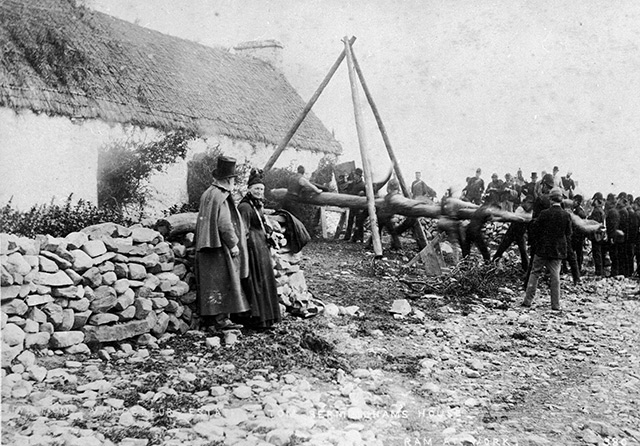 It is July 31st, 1888 and Tom Bermingham is about to be evicted from his home near Kilrush, in County Clare, Ireland, for non-payment of rent. The Law may have armed troops and police in attendance, a 30-foot battering ram shod with iron and the sub-Sheriff standing at its business end equipped with a shield, but the Plan of Campaign, the organisation of resisting tenants, has reporters who can be seen scribbling in their notebooks and Mr French with his camera recording the scene, as he has other evictions in the days before.

The background to this confrontation was the Land Question – the belief of most Irish that the bulk of the land belonged to the people and had been unjustly wrested from them in the 17th century. The Vandeleur estate, of which Bermingham was a tenant, had achieved notoriety in the famine years. A visiting English MP reckoned in 1849 that 20,000 had been evicted round Kilrush in the previous two years. But the public outcry then was muted because the tenantry was unorganised and it was lost among the horrors afflicting the whole country.