The caped crusader first appeared on May 1st, 1939. 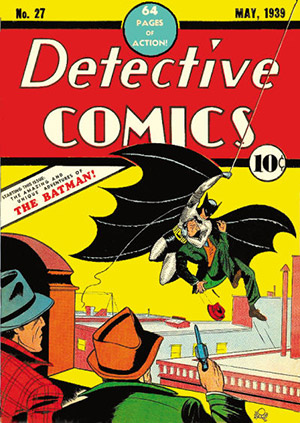 The Caped Crusader made his entrance on the US comic book scene in the monthly Detective Comics. His creator was Bob Kane, an artist and writer aiming to find a new hero to rival Superman, who had appeared the previous year. Kane did sketches of a character with wings like those of a bat and showed them to a comic book writer called Bill Finger. The two men, both in their mid-twenties, collaborated on the Batman stories, though it was Kane who got all the credit and most of the money, to Finger’s eventual resentment.

In his ordinary human persona the character they invented was a rich, idle playboy called Bruce Wayne. Finger coined the name from Robert the Bruce and ‘Mad Anthony’ Wayne, an 18th-century American general in the revolutionary war against the British. He lived quietly in Gotham City (which was New York City), while as Batman he used his genius-level intelligence, supreme physical abilities and indomitable will to wage a ruthless war against criminals. In an explanation supplied by Finger, he was driven by seeing his parents murdered by a street thug when he was a child.

Batman was instantly popular and sales zoomed still higher when his young sidekick Robin was introduced by Finger in 1940. There were female Robins later on. Many other writers and artists were employed on Batman tales over the years and he starred in films, on television and in video games. Recent suggestions that the early Batman was gay have been fiercely disputed. From the 1950s Superman and Batman worked together in some stories. The rogues’ gallery of villains Batman worsted included the Joker, the Riddler and Catwoman, by whom in one tale he had a son. In the hugely profitable 1989 Batman film, the Joker was so brilliantly played by Jack Nicholson that he stole the limelight from Batman himself.

Finger died in 1974, Kane in 1998. Together they created a US cultural phenomenon, who long outlived them.