The winners of the prizes in the Longman History-Today awards 1999 are announced.

This year's Longman-History Today Book Of The Year Prize has been shared between Amanda Vickery, for her book The Gentleman's Daughter: Women's Lives in Georgian England, and Michael Richards, author of A Time of Silence: Civil War and the Culture of Repression in Franco's Spain 1936-1945. The results of the £1,000 competition - for an author's first or second book on a historical topic published in the year ending September 1998 - were announced at a ceremony held at the British Library in London on January 6th. The presentation was made by David Cannadine, Director of the Institute of Historical Research.

The judges - Professors Pamela Tudor-Craig, Jeremy Black and Paul Preston - selected a shortlist of six from more than sixty books submitted, which ranged chronologically from the second millennium BC to the Chechnya War.

Amanda Vickery teaches at Royal Holloway, University of London. Her book (which is published by Yale University Press) is based on a study of the letters, diaries and accounts books of almost a hundred women of the eighteenth century, and reveals the wide range of social and emotional roles undertaken by upper- and middle-class women in the age of Jane Austen. The judges praised this as a book that would appeal both to scholars and to general readers, and as probably the definitive study of its subject for some years.

Michael Richards lectures at the University of the West of England. He writes about the years following the end of the Spanish Civil War, venturing into relatively unexplored territory in analysing the nature of Franco's repression of all forms of liberalism and rejection of outside influences on Spain. The conclusions of his book (published by Cambridge University Press) were felt by the judges to have relevance for all those interested in the totalitarian regimes in the twentieth century. Both titles are reviewed elsewhere in this issue.

The award, now in its sixth year and given in memory of one of the founding editors of History Today, Sir Peter Quennell, was announced by Hilary Shaw, history commissioning editor at Longman. It seeks to encourage high-quality writing and publishing in the field of history, and shows that good history can be attractive to all readers.

The other short-listed titles were A History of London by Stephen Inwood (published by Macmillan), an ambitious attempt to cover the history of London, its people and its economy, from the Romans to the present; Tomorrow the World: Hitler, Northwest Africa and the Path Toward America by Norman J.W. Gola (Texas A&M University Press), a controversial and stimulating new view of Hitler's north-west African policy which argues that it was the first step to a takeover of the Americas; Daimler-Benz in the Third Reich by Neil Gregor (Yale UP), a thorough account of the history of a major industrial concern through the period of the Third Reich, of importance to all students of the period; and Dark Continent: Europe's Twentieth Century, by Mark Mazower (Penguin Books), an assured though bleak survey of the history of Europe in the twentieth century.

The announcement was also made of the winner of a new award, the Longman-History Today 'New Generation' Book of the Year, made in memory of former History Today editors Alan Hodge (joint founder) and Michael Crowder. This is given in the belief that it is important to encourage an interest in history in young people, and awarded to the book that in the opinion of the judges does most to stimulate enthusiasm for and imaginative involvement in history among ten- to sixteen-year-olds. The net was intentionally cast very wide, and titles submitted ranged from large-format illustrated books to historical novels, to historical source books and memoirs.

The prize was given to The History News, Medicine by Phil Gates, with editorial advice by Ghislaine Lawrence and published by Walker Books. Its tabloid-style presentation of the history of medicine was said by the judges to have 'succeeded in spite of the genre' and its jokey style belied its serious content and quality of information. Dr Gates teaches at the Department of Biological Sciences at Durham University and has written widely for children on scientific topics. He described writing this book as both 'enormous fun, and a real eye-opener to the excruciating pain and suffering endured by earlier generations'.

The other titles to be shortlisted by judges Muriel Chamberlain, Angela Leonard and Martin Roberts were: A Traitor Among Us, by Elizabeth Van Steenwyk, published by Eerdsman Books - an exciting novel of life in occupied Holland at the time of the Arnhem landings, which evoked a palpable sense of fear and suspicion, but also managed to include the human tragedy and the torn emotions of war; and Remembrances of Hell, The Great War Diary of Writer, Broadcaster and Naturalist Norman Ellison, edited by David Lewis and published by Airlife Publishing Ltd. This combines an appealing memoir of the First World War with good contextual material, both written and pictorial.

David Cannadine's address, on 'Reviewing and Being Reviewed', is published on page 30 of this issue. The evening was rounded off with History Today's annual party. 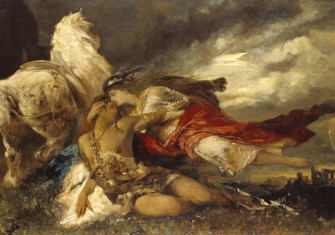