The Austrian writer, whose short stories and novellas have recently enjoyed a new burst of popularity, used history to remind us that a better life is possible, as Alexander Lee explains in his new series. 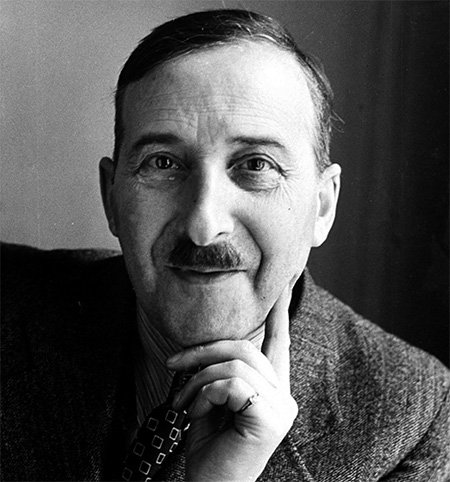 Stefan Zweig’s play Jeremias was performed for the first time at the Stadttheater in Zürich on February 27th, 1918. The Old Testament prophet was returned to life to deliver again his prophecy of Jerusalem’s destruction. Castigating the people of Judah for having abandoned the faith of their fathers, Jeremiah warned that their punishment was at hand. His words went unheeded. At the instigation of the Temple priests, he was beaten and put in the stocks. When war with Babylon broke out, some urged King Zedekiah to put him to death. But as he was hurled into a cistern, they saw the terrible truth of his warnings. After a long siege, Jerusalem fell to the Babylonians, its Temple was destroyed and its people were scattered. All that was left was for Jeremiah – rescued from his well by a Cushite – to mourn the city’s fate; in the final scene, he held its past up as a mirror to the present, in the hope that it might strengthen the exiles’ faith.

Written at the height of the First World War, Jeremias was an attempt to articulate Zweig’s growing sense of foreboding. Employed in the Austrian ministry of war, he was appalled not only by the loss of life, but also by the destruction of European culture. What alarmed him most was the silence of those who longed for peace. He felt he had to speak out, to warn of what lay ahead. Unable to say in ‘plain terms what [he] felt and thought, [he] chose the only way left open to [him], that … of historical allegory’. Turning to the Hebrew Bible, the ‘primal source’ of his Jewish faith, he found in Jeremiah – ‘sublimest among the adversaries of war’ – the perfect subject for his play.

Jeremias was emblematic of Zweig’s attitude towards history. Though now best known for the psychological depth of his short stories and novellas, he was drawn to the past as a means of expressing his cultural hopes and societal fears. Condemned to witness the destruction of all that he held most dear and forced to wander the earth as an exile, he came to see himself as a modern Jeremiah: looking forward, looking back, weeping and warning.

Zweig’s outlook had been forged by the radical transformation of Germanic historiography during his youth. For much of the 19th century this had been dominated by the empiricism of Leopold von Ranke and Theodor Mommsen. Reacting against Hegel’s idealism, they had argued that it was history’s task to reconstruct the past wie es eigentlich gewesen (‘as it actually was’). Though this approach was to have a lasting influence, its dominance was shaken by political and social upheaval in the decades before Zweig’s birth.

As Prussia led the charge towards German unification and Austria-Hungary allowed its territories greater autonomy, two separate visions of history emerged. The first, pioneered by the Frenchman Hippolyte Taine and the Austrian Heinrich Friedjung, embodied the ‘liberal’ and nationalistic fervour sweeping the Continent. Drawing on the sociological positivism of Auguste Comte, it was grounded on the belief that culture was shaped predominantly by race, milieu and moment. By analysing the past in such ‘scientific’ terms, it was hoped that history could serve to strengthen national identity and thereby accelerate the nation’s progress. But the second, developed by Jacob Burckhardt and Friedrich Nietzsche, was diametrically different. Rejecting positivism, it grew out of a more individualistic understanding of life. As Nietzsche explained, man was not created by his environment; nor, indeed, could he ever be defined objectively. His nature was inherently and ineradicably subjective. Any attempt to force human experience into a nationalistic straightjacket was to deny the essence of humanity. If history had a purpose, it was not to record the past but to counter the tide of nationalism, to idealise the ‘European’ spirit and to illustrate the spiritual heights to which the individual could rise.

Growing up in fin-de-siècle Vienna, Zweig was, from his earliest days, a cosmopolitan modernist. Enthralled by the poetry of Rainer Maria Rilke and Emile Verhaeren, he came to share their preference for a dream-like state of ideals and imagination over the gritty realities of an industrial age. Like his friend, Hugo von Hoffmanstahl, he evinced a profound faith in the individual’s creative potential and believed that the function of literature was not to petrify a ‘spirit’ in words, but to inflame the soul. This applied to history, too. In his 1904 doctoral thesis on Taine’s philosophy, he found the Frenchman’s positivism unsatisfactory. It seemed inconceivable to him that the human mind could be determined so exclusively by race, milieu and moment; it seemed absurd that history should be conducted on such a basis. Instead, he – like Nietzsche – saw history as a means of exemplifying that spirit of individualism that he most admired.

Seeing his beloved Europe torn asunder in the Great War, its importance was brought home to him. As he later recalled in a preface to Jeremias, it was then, ‘amid the rage of battle’, that he realised not only how precarious the future of his cultural ideals were, but also how the past could reveal the dangers of war and nationalism to the present. In the hope that Jerusalem’s fate might warn of what lay ahead, he ‘formed a present out of the past and translated the present back into the past’ for the first time.

Yet it was not until the postwar period that Zweig turned to writing history in earnest. Alarmed by the nationalistic violence that erupted after the fall of the Habsburg Empire, he was deeply troubled when fascism began to raise its ugly head in Austria. Setting himself against the völkish histories of Otto Brunner and his ilk, he began writing not only a memoir – Die Welt von Gestern (‘The World of Yesterday’, published posthumously) – but also a series of biographies, including Der Kampf mit dem Dämon: Hölderlin – Kleist – Nietzsche (1925), Marie Antoinette: Bildnis eines mittleren Charakters (1932) and Triumph und Tragik des Erasmus von Rotterdam (1934). Taking for their subjects individuals who embodied the intellectual free-spiritedness, bold imaginativeness and ‘European-ness’ that he believed to be imperilled, they were an unapologetic attempt to show that a different way of living was possible and a call to action.

Like Jeremiah, his words were in vain. After the assassination of Chancellor Engelbert Dolfuss on July 25th, 1934, Austria’s fate was sealed. Zweig fled: first to Britain, then to America, settling finally in Brazil. For a time, he continued to cling to his hope that history could turn back the tide, or at least point the way towards a future beyond Europe. He penned passionate, moving works on Sebastian Casteillio’s defence of religious toleration against Calvin’s authoritarian Protestantism (1936), on Ferdinand Magellan (1938) and on Amerigo Vespucci (1942). But as Nazi Germany went from triumph to triumph in the early days of the Second World War, his relationship with history changed.

This was illustrated by the enigmatic Dr B. in Schachnovella (‘Chess Story’, 1941). Kept in isolation by the Nazis, Dr B. occupies himself by endlessly replaying the greatest games of chess ever played. After memorising every move in the book he has been using as a guide, he begins playing himself and, as his psyche begins splitting into two distinct personalities, suffers a nervous breakdown. After being nursed back to health, he flees. On his journey across the Atlantic he finds himself on board a ship with a group of chess enthusiasts and is drawn into playing the reigning world champion. The first game develops quickly and Dr B. scores a brilliant victory. But when the tempo slows in the second, he has the time to think more carefully and – returning to his memories of great games past – runs through every move that could possibly be made in his mind. Unable to free himself from the past and the possibilities it creates, he loses and plunges once again into madness.

In the same way, history had come to torment Zweig. While it seemed to hold out hope of another way of life, he felt powerless, torn and depressed whenever he paused to think about it more carefully. Looking at the past, there seemed to be so many possibilities; but looking at the horrors of the present, the unreality of those possibilities became a form of torture. As he worked on his memoirs during the darkest days of the war, the last of his belief was destroyed. In despair at the unbridgeable gulf between past and present, he and his wife committed suicide on February 22nd, 1942.

Though his critics – of whom there are sadly many – might say that his death is a warning against his vision of history, precisely the opposite is true. As war and nationalism again come to blight out lives, we are in need of exactly such a modern Jeremiah to warn us of what we stand to lose and to remind us that a better life is possible.