The son of a country whose history had been written by outsiders, Chinua Achebe recognised the need for African literature with a Nigerian voice. 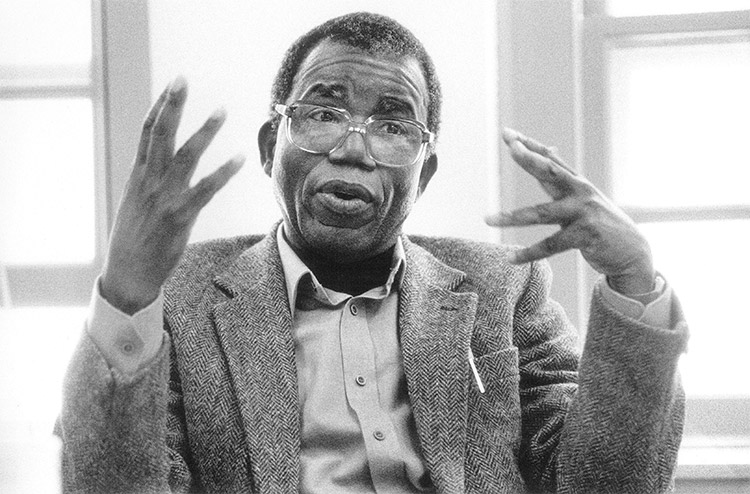 When University College, Ibadan opened its doors for the new academic year in the autumn of 1951, Nigeria was in the grip of political ferment. Since its earliest days as a British colony, it had been governed through a clumsy and unpopular system of indirect rule. Now, in the aftermath of the Second World War, its people were agitating for greater self-government. Earlier that year, the Governor-General, Sir John Macpherson, had introduced a new constitution granting limited powers to a House of Representatives. In the elections held over the following months, nationalist parties won victories in each of the colony’s three regions and demanded further reforms, which they hoped would pave the way for full independence.

Then entering the third year of his studies, Chinua Achebe found himself swept along by a new Nigerian cultural consciousness. No longer willing to be bound by British colonial attitudes, writers, artists and musicians were beginning to articulate a distinct vision of Nigerian identity; and, like them, Achebe came to believe that, as an aspiring author, it was his duty to help foster this sense of Nigerian selfhood.

Achebe had a clear sense of what this entailed. As part of his arts course, he had read not only Shakespeare, Milton and Wordsworth, but also modern writers, such as Joseph Conrad, Joyce Cary and Graham Greene. Although they were thought to be relevant to colonial life, he had been appalled by the ‘superficial picture’ of Africa they presented. In their different ways, they all articulated unmistakable racial prejudices. As Achebe pointed out many years later, Conrad’s novella Heart of Darkness (1899/1902) portrayed Africa as ‘the antithesis of Europe, and therefore of civilisation, a place where man’s … intelligence and refinement are … mocked by triumphant bestiality’. Africans themselves were denied any semblance of humanity and reduced to the level of mere animals. Such depersonalisation was, of course, dreadful enough. But what made this ‘obvious racism’ even more shocking was the fact that it also deprived the African peoples of their history as well. Set in pre-war Nigeria, Cary’s Mister Johnson (1939) assumed that theirs was a primitive and unchanging culture, which, lacking any sense of justice, devoid of political structures and dominated by crude superstitions, had remained immune to wider historical developments. Only after they had been exposed to the ‘civilising’ influence of Christian missionaries and European colonists, Cary implied, had Africans begun to participate in the drama of world history.

Achebe realised that, if Nigeria was to develop a sense of its own identity, its literature would not only have to be written from a Nigerian perspective, but would also have to reclaim the country’s past. It was to this task that he turned over the coming years in writing his first novel, Things Fall Apart (1958). Taken from W.B. Yeats’ 1920 poem ‘The Second Coming’, its title testified to Achebe’s determination to turn colonialist interpretations of history on their head. Whereas Yeats had believed that the political chaos of the early 20th century foreshadowed the end of Christianity, Achebe suggested that it was the coming of Christianity that had destroyed the rich culture of the Igbo people.

Set in the 1890s, the novel traces the story of Okonkwo, an Igbo warrior, renowned as a skilled wrestler. After a woman is killed by a man from a neighbouring village, the murderer’s son, Ikemefuna, is taken as a peace offering and placed in Okonkwo’s care until his fate is decided. With time, Okonkwo grows fond of the boy; but, when the village oracle declares that Ikemefuna must die, he insists on participating in the killing lest he appear weak. From that moment, Okonkwo’s life begins to unravel. At a village elder’s funeral, he accidentally shoots the dead man’s son. To placate the gods, he must go into exile for seven years. He bears this stoically. Bu while he is away, the first Christian missionaries appear in the village and, after building a simple church, soon begin to win converts, including his son. Dismayed by this threat to their way of life, the elders are initially uncertain how to respond. When Okonkwo returns, however, he convinces them to defend themselves like warriors. Along with several others, he burns the church to the ground. Soon afterwards, they are arrested by colonial officials, who refuse to release them until a humiliating ransom is paid. This only infuriates Okonkwo further. At a meeting, he urges the village to wage war against the white man. But before a decision can be taken, colonial messengers appear and order the gathering to disperse. Snatching up his machete, Okonkwo cuts one of their heads off. The rest of the village is appalled by his actions and unwilling to fight what they now regard as an unjust war. Realising that they will abandon him to the white man, he despairs. When the district commissioner arrives to arrest him soon afterwards, he finds that Okonkwo has hanged himself.

After Nigeria achieved independence in 1960, Achebe continued his reappropriation of its history. In Arrow of God (1964) he challenged the view that the spread of Christianity could be explained by its inherent superiority to traditional customs and instead suggested that, paradoxically, Christianity had been able to assume some of the Igbo religion’s social functions as a result of the enduring strength of traditional beliefs in a non-hierarchical society

Based on a true story, the novel tells of Ezeulu, an Igbo priest who is imprisoned for refusing to serve as a warrant chief in the 1920s. While in jail, he is prevented from observing the new moon and is therefore unable to announce the Feast of the New Yam when he is released. Given that the villagers cannot gather in their harvest until he does so, they beg him not to wait another month, as tradition demands. But he refuses. Locked in a struggle with the priest of a rival deity, he believes himself to be an ‘arrow in the bow of his god’ – and even suspects that the divinity was using the white man as a weapon of war as well. In the face of starvation, the villagers eventually ask the Christian god for help; and, as they do so, Ezeulu is driven to madness by the unexpected death of his son.

Divide and be conquered

But Achebe was no romantic. While he may have wished to rescue Nigeria’s history from colonialist attitudes, he did not want it to define itself by its past. Nigeria was, after all, a somewhat artificial entity, created by the British. It comprised more than 500 ethnic groups, of which the Igbo, the Yoruba and the Hausa were merely the largest. Although they had shared many of the same experiences since the advent of colonialism, each had their own history. If they were each to define themselves by their own pre-colonial past, they would only be divided further – with devastating consequences for Nigeria.

Already, tribal loyalties had begun to creep into the practice of government, bringing corruption in their wake. Achebe first warned of this in No Longer at Ease (1960). After receiving a British education, Obi Okonkwo – the grandson of the protagonist in Things Fall Apart – joins the civil service, determined to be honest. Finding himself unable to reconcile the Igbo’s traditional ways with his ‘modern’ outlook, he falls into debt and eventually accepts a bribe. This trend only pointed in one direction. In A Man of the People (1966), Achebe predicted that, if tribal loyalties continued to crowd out Nigerian patriotism, then corruption would eventually become so endemic that civil unrest would erupt, or there would be a coup. He was all too right. Soon after the novel was published, Major-General Johnson Aguiyi-Ironsi and then General Yabuku Gowon seized power. The following year, the Igbo-dominated Eastern Province seceded and the Republic of Biafra was declared, catalysing almost three years of bloody civil war.

Achebe recognised that history did not offer Nigerians any easy solutions. It was not a guide. It did not prescribe any course of action, nor teach any lessons. It emphatically did not offer support for divisive tribal identities. Rather, it was a mirror. When divested of colonialist distortions, it could shatter the myth of European cultural ‘superiority’ and reveal the inherent value of traditional customs. It could – as Achebe argued in The Trouble with Nigeria (1983) – shed light on the nature and origins of the ‘problem of national integration’. And it could illustrate the need for a sense of national identity transcending all tribal loyalties. But most of all, it showed Nigerians that, instead of being slaves to their ancestors, they now had to make a new history – a new Nigerian history – for their children.