Adlai Stevenson ran for a second time against Eisenhower in 1956, but Eisenhower won the election even more convincingly than in 1952. 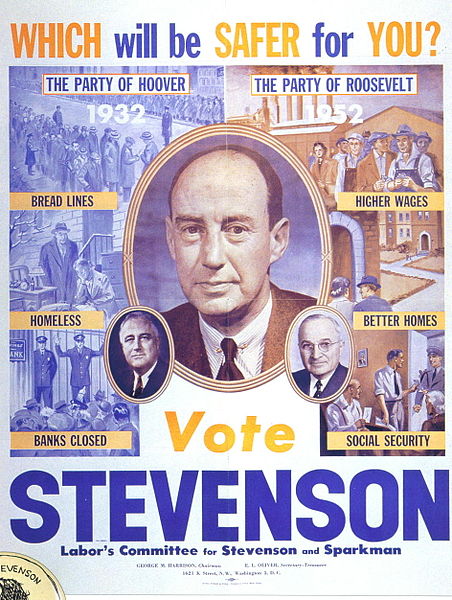 When the 1,372 delegates to the Democratic Party’s national convention gathered in Chicago on August 13th, 1956, Adlai E. Stevenson was a sure thing for the nomination as the Party’s candidate against the incumbent President Eisenhower.

It was his second chance, as he had run against Eisenhower unsuccessfully four years before. Now fifty-six, Stevenson came from an Illinois family with a distinguished record in Democratic politics: his grandfather had been Vice-President in the 1890s. With a successful law practice in Chicago and varied experience in Washington, he had taken a hand in the organization of the United Nations after 1945 and been elected Governor of Illinois in 1948. In 1952 after a brilliant speech to the Party convention he was chosen to run against Eisenhower. He had the support of the Chicago city bosses, who much preferred  him to Senator Estes Kefauver of Tennessee, whose investigations of organized crime had perturbed them. Eisenhower won the 1952 election easily, with 55 per cent of the popular vote and a huge majority in the electoral college.

Over the next four years, Stevenson was the country’s leading Democrat. Intelligent, civilized and sophisticated, he was a witty and stylish speaker and the darling of Democratic intellectuals. It was entirely typical of him to say that ‘the hardest thing about any political campaign is how to win without proving that you are unworthy of winning.’ When 1956 came, Senator Kefauver started campaigning with a flourish, winning the Democratic primaries in New Hampshire and Minnesota, but then Stevenson bestirred himself. He took the crucial state of California handsomely and in July Kefauver withdrew from the contest and announced his support for Stevenson. At the convention Governor Stevenson’s candidature was moved by Senator John F. Ken­nedy of Massachusetts. Ex-President Harry S. Truman, who said that Stevenson was ‘too defeatist to win’, nominated Governor Averell Harriman of New York, but Stevenson won easily on the first ballot with 905-and-a-half votes, which was two-thirds of the total, far ahead of Harriman with 210, Senator Lyndon B. Johnson of Texas with 80 and assorted ‘favourite sons’ with fewer still. Stevenson gained all the votes of the delegations from ­eighteen states, including California, and the majority of the votes from seventeen more, Illinois and Massachusetts among them, as well as those of the delegates from Alaska, Hawaii and Puerto Rico. Governor Stevenson now announced that, contrary to all precedent, he would indicate no preference for a running mate. To the horror and stupefaction of the Party professionals, he left the choice of the candidate for Vice-President to the convention. After two ballots Senator Kefauver (Truman always privately called him ‘Cow-fever’) was elected with 750 votes against 593 for Senator Kennedy. Bottom of the list was Senator Hubert H. Humphrey of Minnesota with five votes. The one to gain most would be Kennedy, who acquired national prominence without having to run alongside a loser. Connoisseurs thought the ensuing campaign rather dull, despite occasional moments such as an obviously pregnant woman parading with a banner saying ‘Stevenson Is The Man’. Eisenhower spoke in lofty generalities. ‘Leave the yelling to the opposition’ was his advice to the Republicans, and it worked. Stevenson promised to end American testing of nuclear weapons and abolish the draft. Eisenhower opposed him on grounds of national security, and the Suez crisis and the Soviet suppression of the uprising in Hungary suggested to many Americans that Eisenhower was right. He won the election even more convincingly than in 1952, taking 58 per cent of the popular vote and winning the electoral college by 457 to 73.