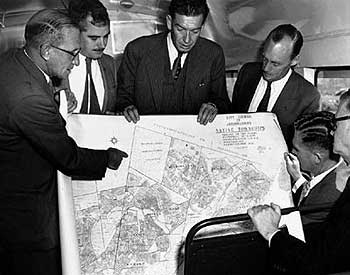 The Alliance between the African National Congress (ANC), the Communist Party and the major trade union movement, COSATU, is perhaps the most important institution in South Africa today. More influential than parliament, it is the organisation that shapes the country’s destiny. Hardly a day goes by without a reference to the Alliance, yet very few South Africans understand how it operates. Even the origins of the Alliance remain obscure. With no founding document and no written constitution it is strange that this organisation, which carries such weight, is so poorly understood.

The roots of the Alliance can be found in the 1950’s when the ANC was forced to confront the apartheid policies of the National Party. Although elements of the relationship can be traced back still further, it was in 1956 during the Treason Trial that the formal relationship came about.  The trial, which charged 156 people with treason, among them Nelson Mandela, forced the ANC to look for allies among the Indian, Coloured and White communities.

Four pro-ANC political organisations came together with trade unions that opposed apartheid. An executive was formed, but given the intense repression of the period it was almost impossible for the full compliment of fifty delegates to hold meetings. Instead, a secretariat was formed in 1958. Walter Sisulu led its operations for the ANC, with Ben Turok as its administrative secretary. They went into hiding, meeting every day to co-ordinate the resistance. Interviewed for this book, Turok described their daily routine.

“Our job was to co-ordinate the positions of the different organisations,” he recalled.  “We worked like crazy. Because of the security situation you needed a small ginger group who could act, and that was our job.  So we led. I am not ashamed to say that.”

Other groups with whom the ANC attempted to co-ordinate resistance to apartheid, like the Pan Africanist Congress (PAC) and the Liberal Party, saw this tight-knit group as manipulating their work. Jordan Ngubane, a Liberal Party member accused the ANC and Communists of gathering in secret to set the agenda of meetings. They provided, he said: “an invisible hand that moved events towards its own goal.” This issue was important in splintering this wider grouping.

The long-term consequences were even more important. In 1961 the ANC, PAC and Communist Party were banned. The Alliance attempted to maintain an underground presence in South Africa, but to little effect. The ANC would spend years attempting to gather its strength in Africa, with limited assistance from the newly independent African states. It was left relying on its Communist Party links to gain arms and training from East Germany and the Soviet Union. At the same time, with the help of established Communist Party exiles and the wider Anti-Apartheid movement, the ANC would gradually gain leverage in the corridors of power in Western Europe, the United States and the United Nations. South Africa’s white government had unleashed its security forces and – at least until the early 1970’s – was able to rule the country almost unopposed.

In the 1970’s two events took place that were to change the course of South African history. Both were as unforeseen by the government as they were by the ANC and its allies. They were to pose major challenges to the regime and its opponents.  These critical moments of resistance were the Durban strikes of 1973, which re-ignited the flame of trade unionism and the Soweto uprising of 1976, which re-established the tradition of popular resistance.

The organisations they were to produce – the Congress of South African Trade Unions and, in the 1980’s, the United Democratic Front – were, in the end, to play the major roles in eliminating apartheid. This is not to underestimate the work of the ANC or the wider Alliance, but the ousting of the South African regime was mainly the result of resistance on the streets and in the townships. This, together with international pressure in the form of sanctions and disinvestment promoted by the ANC and Oliver Tambo in particular, fatally undermined the regime. Despite the sacrifices of many thousands of brave men and women, it was not an ANC army that marched into Pretoria. Instead, it was negotiations that ended centuries of white rule, rather than armed struggle.

Who Rules South Africa traces the rise of the ANC led Alliance, its transformation under Presidents Mandela, Mbeki and Zuma, and its influence in South Africa today. This complex and difficult relationship is now critical to the future of the ANC and the country. It has survived exile and repression; how long it will continue to be at the centre of South African politics is an open question.

Who Rules South Africa? (Biteback Publications) by Martin Plaut and Paul Holden is published in August 2012.

White South Africans who fought in the long ‘Border War’ to maintain apartheid now find themselves in a country run by their former enemies. Gary Baines examines their continuing struggle to come to terms with the conflict and their efforts to have their voices heard.

Iain Smith looks at how teaching history is being turned upside down in South Africa today.