Long before he helped to draft the Declaration of Independence, Franklin was a printer, an inventor and a philosopher. 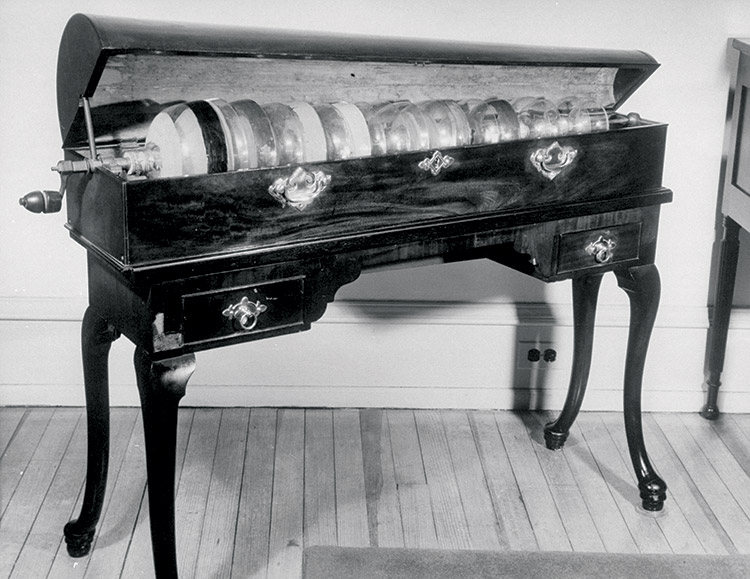 Benjamin Franklin was a practical man. When short of type as a young printer, he spurned the idea of waiting for duplicates from England and manufactured his own. In later life, after noting the musical potential of glass bowls, he invented a new musical instrument in the glass armonica, which found favour with Mozart and Beethoven. All of a piece with this practicality was his Experiments and Observations on Electricity, the work that won him the Copley Medal, the 18th-century equivalent of the Nobel Prize.

However, to describe Franklin as ‘practical’ is not to dismiss an exceptional intellectual capacity, a wide and deep reading and an ability to comprehend the intricate philosophical concepts of others. He used the latter to create US institutions, not least the American Philosophical Society, with the works of Locke and Defoe providing intellectual inspiration.

As to what Franklin himself regarded as his guiding principles, one is well advised to look at his time in London as a young printer and the consequential Plan of Conduct, which he wrote for himself on the voyage back to Philadelphia. When considering it decades later, Franklin declared it ‘the more remarkable, as being form’d when I was so young, and yet being pretty faithfully adhered to quite thro’ to old Age’. It is a plan for a practical life, for the joint benefit of Franklin himself and of a wider public – there being no inherent logical contradiction between the two in the 18th century, so long as an individual possessed both the self-knowledge to understand the need for balance and the discipline to ensure it. Kevin Slack believes that Franklin did just that.

Slack makes clear that there is a major difference between practicality and pragmatism. The former allows people to alter their stated position to accommodate differences with others without compromising fundamental principles. He argues powerfully that Franklin’s principles were forged by 1760. This might seem strange, as in that year he was a loyal British subject who lobbied for a great British empire of North America, whereas by 1776 he was one of the Founding Fathers of the United States. Yet one can argue that the foundations of Franklin’s argument remained unchanged, being based on an extraordinarily accurate estimate of America’s growth potential. What did change was Franklin’s view of the necessary political superstructure: it would still be an empire of North America, but no longer British. Slack addresses this, though for the most brilliant exposition one should turn to Carla Mulford’s Benjamin Franklin and the Ends of Empire (2015). Slack is more focused on identifying the one key influence on Franklin’s personal philosophy. This is a well-trodden and rather muddied path, not made any easier by Franklin’s own aphorism: ‘Let all Men know thee, but no man know thee thoroughly.’ Many different ‘philosophical Franklins’ have been proffered and the book is valuable in addressing them. Slack himself goes for the 3rd Earl of Shaftesbury, himself tutored by Locke, but more useful is Slack’s general definition of Franklin’s understanding of Natural Rights in Chapter Eight. There is, though, one surprise here: in his argument he glosses over Franklin’s greatest practical application of philosophy. By suggesting to Thomas Jefferson that the key line in the Declaration of Independence – ‘We hold these truths to be sacred and undeniable’ – should be changed to ‘We hold these truths to be self-evident’, Franklin neatly took God out of the equation, substituted Natural Rights and changed the moral basis for political power in the western world.

Benjamin Franklin: Natural Right and the Art of Virtue
Kevin Slack
University of Rochester Press and Boydell and Brewer 328pp £75