A Painting Tells a Thousand Words

The Painted Hall at Greenwich: how it was commissioned, its narrative and its meaning. 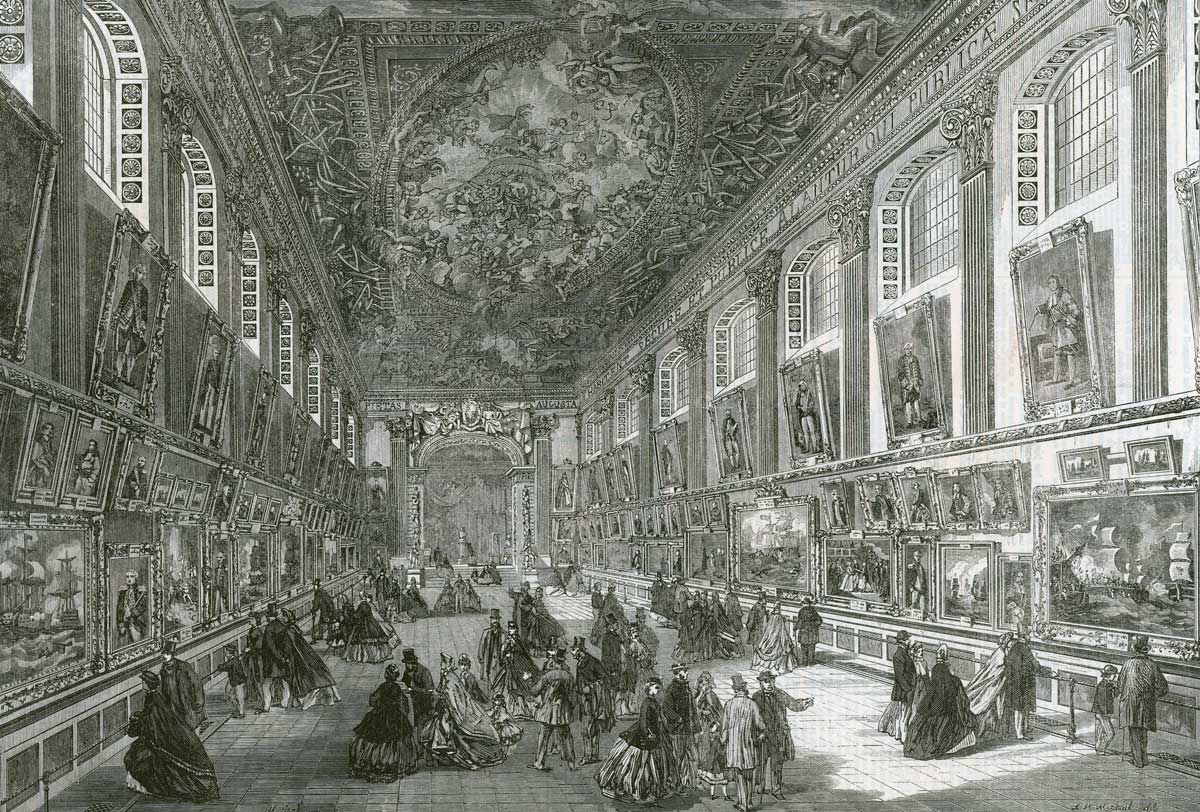 The naval battle of La Hogue is not much remembered now, but Winston Churchill described it as ‘the 17th-century Trafalgar’. Had the French defeated the Royal Navy, the exiled James II – who watched from the French shore – may well have reclaimed his throne, undone the ‘Glorious Revolution’ and put Britain on a more absolutist, less commercial course.

Such was the relief when the news of Admiral Edward Russell’s victory reached London in 1692, that Queen Mary (James’ estranged daughter who, in a confected arrangement, reigned with her Dutch husband William of Orange), ordered that a new hospital be constructed for former seamen, to complement the Royal Hospital, Chelsea, built for army veterans by her uncle Charles II.

When Mary died of smallpox in 1694, William saw to it that her wishes were carried out. Sir Christopher Wren, the king’s surveyor, commenced a masterplan and Nicholas Hawksmoor, his amanuensis and president of the Royal Society, was appointed his assistant.

This scholarly, beautifully illustrated monograph marks the restoration of the Painted Hall of the Royal Hospital – now the Old Royal Naval College in Greenwich. It explains not only the context in which the Painted Hall was commissioned, but also its narrative and its meaning. Both require considerable explanation for a modern audience.

Situated on the banks of the Thames, downstream from the City of London, the Royal Hospital, was ‘in View of all the World’, according to Hawksmoor. When it was finally completed in 1751, Canaletto painted the view and, in so doing, confirmed London as the new Venice, the prosperous centre of a maritime empire. But a project of such scale required funds, which were not forthcoming from Parliament. The diarist John Evelyn was appointed treasurer and bigwigs, both Whig and Tory, were tapped for cash. Queen Anne chipped in £6,472 of naval prize money confiscated from the pirate William Kidd. In the early days, most of the money came from a sixpence levy on sailors’ wages.

The decision to commission a largely unknown artist, James Thornhill, to decorate the interior added to the risks taken by the directors. He was probably recommended by the Duke of Devonshire, for whom he had completed a mural at Chatsworth. Thornhill was not only a master of the trompe l’oeil style, he was to design a scheme full of allusion.

Though the revolutionary settlement was Protestant, religion is hardly mentioned in the ceiling. William accepted the throne with his powers limited by a Bill of Rights and dependent on Parliament for annual expenditure approvals. Other innovations included the Bank of England, a stock exchange and an independent judiciary. The economic growth they underpinned financed the Royal Navy, which in turn protected commerce. This meaning, properly understood, belies the slogan ‘Britain’s Sistine Chapel’ which is sometimes attached to the Painted Hall. Its message is secular, not religious and a better comparison is Lorenzetti’s Allegory of Good and Bad Government in the Palazzo Publicco in Siena.

The complexity of the Painted Hall, and its dozens of figures and allegories, makes summary of it difficult. Even contemporaries relied on Thornhill’s Explanation. But the sweep of the narrative is simple – five successive monarchs, sustained by law, justice, wisdom, commerce, innovation and naval success.

In the Lower Hall, a captured Spanish galleon in depicted, with the rivers Severn and Humber beneath. In the centre of the ceiling are William and Mary, surrounded by the attributes of good government. William accepts an olive branch of peace, simultaneously offering the red cap of liberty to Europe while crushing Louis XIV, representing ‘Tyranny and Arbitrary power’.

On the west end is a British man of war with a Winged Victory carrying French colours. Beneath it is the City of London, with rivers bringing produce to her, including the Tyne, with a basket of coal, a prescient allusion to the abundant cheap energy upon which the Industrial Revolution would rely.

In the south-east corner of the ceiling, we see the Astronomer Royal, John Flamsteed, holding a large piece of paper on which is written the date of the next eclipse. In front of him is a mural arc telescope, which he invented to determine a ship’s longitude at sea. Step through into the Upper Hall and the ceiling displays a double portrait of Queen Anne with her husband George of Denmark. Neptune, symbolising the Royal Navy, hands them a trident.

The spectacle culminates on the west wall with the Hanoverian George I, together with the Prince of Wales (later George II), beneath the inscription ‘IAM NOVA PROGENIES COELO’ (‘Now a new generation descends from heaven’). The background is the newly constructed classical temple of St Paul’s Cathedral. Surrounding the king is a host of figures, including Mercury, Justice, Time and his children and grandchildren. To the right, there is a self-portrait of the artist, Thornhill, his hand mischievously outstretched, waiting to be paid. With the publication of this book, an excellent guide, his rich, compelling allegories can be understood once more.

George Trefgarne is an economist who is working on a history of the Industrial Revolution.