An appreciation of the great historian of the Crusades.

Educated at Eton and then Trinity College, Cambridge, Riley-Smith's first academic post was at the University of St Andrews (1964-72). He lectured in Cambridge from 1972 to 1978 before he became Professor of Medieval History at Royal Holloway, University of London from 1978 until 1994. He returned to Cambridge to hold the prestigious position as Dixie Professor of Ecclesiastical History from 1994 until his retirement in 2005.

His book What Were the Crusades? first appeared in 1977 and is now in its fourth edition (2009). Answering this deceptively simple question sparked decades of academic debate. It prompted a reappraisal of the scope and longevity of the crusading movement, extending the geographical, chronological and conceptual range of the subject well beyond a traditional framework of expeditions to the Holy Land between the First Crusade and the Fall of Acre (1291) to include those in areas such as Spain and the Baltic, those against the Cathar heretics in southern France and campaigns against the Ottoman Turks.

For many years Riley-Smith worked on the early generations of crusaders. The First Crusade and the Idea of Crusading (1986) and The First Crusaders, 1099-1131 (1996) brought powerful new understandings of, most particularly, the myriad motives of these people as individuals, as members of family networks and as a representation of contemporary religiosity. These themes were also apparent in his work on the Military Orders. Jonathan was a leading authority on the history of the Military Orders, most especially the Knights of St John (the Knights’ Hospitaller), through The Knights of St John in Jerusalem and Cyprus, c 1050-1310 (1967) and The Knights Hospitaller in the Levant c.1070-1309 (2012). He originated the highly successful quadrennial international conference on the history of the Military Orders, first held in 1992. This close understanding of the history of the Frankish East extended into broader processes of structure and government and formed the core of The Feudal Nobility and the Kingdom of Jerusalem 1174-1277 (1973).

Aside from a prolific published output Jonathan supervised over 30 doctoral students, many of whom have gone on to academic careers of their own. He was a frequent and trenchant commentator on television and radio and a widely travelled conference lecturer in Britain, Europe, Israel and North America; he was a founder member of the Society for the Study of the Crusades and the Latin East (1980) the foremost international organisation for scholars in the field and its President from 1987 to 1995. He also held prominent positions at the Institute of Historical Research, London and the Order of St John at Clerkenwell.

In recent years he worked on a huge translation project on the charters of the Latin East, a labour that both reflected and derived from many aspects of Jonathan’s expertise. It coupled his extensive knowledge of charter evidence with a detailed understanding of the workings of the Latin East across religious and secular institutions. By making the fruits of this labour freely available on the Internet (crusades-Regesta.com) this rich seam of material is opened out to a substantial new audience of academic scholars, students, school and college pupils, as well as the broader public.

Jonathan was an individual of enormous integrity and directness. His vast enthusiasm and encouragement (accompanied by a wonderful roaring laugh) as a friend, colleague and academic leader inspired so many people; he leaves behind a rich and distinguished legacy of memories and ideas.

Jonathan Phillips is Professor of the History of the Crusades at Royal Holloway University of London. 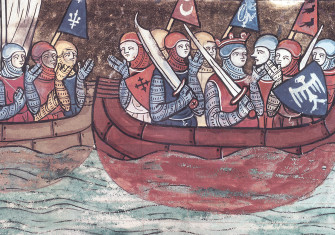