The Smithfield Joust of 1467 was a triumph for Edward IV and his dynasty. 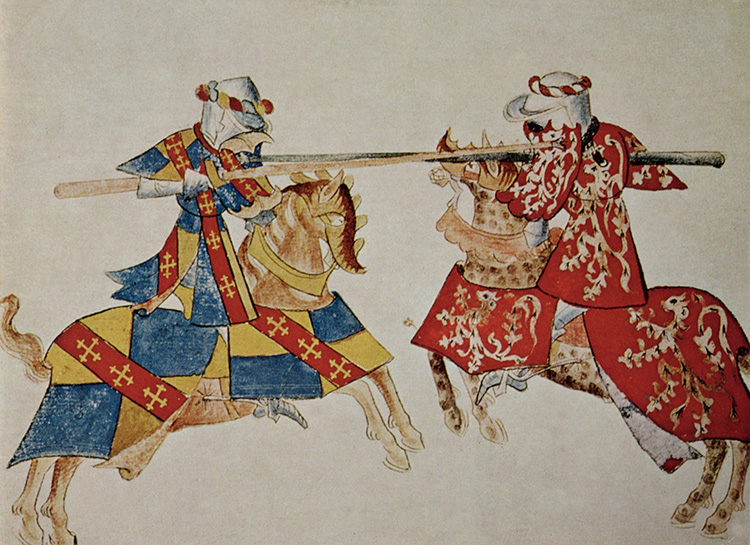 ‘Laissez aller’ cried a herald as Woodville and the Bastard charged courageously on horseback, carrying sharp spears, each ready to strike the other. But, alas, they missed. One charge without a tilt and with sharp spears was all that the tournament challenge had prescribed on this occasion. So for the Smithfield crowds the perilous joust was over, which must have made for a rather anticlimactic end. It was in the next contest, the tourney, a fight on horseback using swords, when an explosive incident occurred: a violent clash between the knights, which left the Bastard pinned under his horse. This had the potential to ruin Edward IV’s diplomacy aims, a disastrous outcome given that the Smithfield tournament was not intended purely for entertainment. It had a real political value.

On June 11th and 12th, 1467 the most spectacular tournament of the age was held at Smithfield in London. Edward declared a public holiday and commoners, unable to enter the enclosure, climbed trees to obtain a glimpse of the combatants. The tournament was integral to the diplomatic relationship between England and Burgundy, which included negotiations for a marriage treaty between Duke Charles the Bold and Margaret of York, sister of Edward. In addition, it also proved that England could compete with the international glamour of the Burgundian court, which was known for its decadent displays of chivalry. Following the disastrous reign of Henry VI, Edward presented the practice of chivalry as the antidote to England’s humiliation and to restore his dented masculinity. The tournament was a way of emphasising the validity of his rule by impressing the Burgundian visitors and the City of London with the authority and splendour of his court. Indeed, the propaganda of 1467 was so successful that the Smithfield tournament became a model for the great Tudor tournaments of Henry VIII.

Anthony Woodville, Lord Scales, was selected as the English challenger, standing in for the king, who had chosen not to compete but to preside over the fighting. Woodville’s rapid rise at the Yorkist court was in part because his sister, Elizabeth Woodville, was Edward’s queen. But the choice also owed something to his own athletic prowess, as he had a reputation for knightly feats of arms and literary accomplishments. It was important that Woodville embodied the chivalrous ideal, as he represented the masculinity of both Edward and England. It was not just Woodville’s manhood that was at stake here but the manhood of England.

The person selected to be Woodville’s opponent in this challenge was Antoine, the Bastard of Burgundy. He was publicly acknowledged as the natural son of Philip the Good, Duke of Burgundy and was one of the most renowned jousters in Europe.

On the first day of the Smithfield tournament, in the tourney Woodville spurred his horse into action and was seen to ride violently against the Bastard and crash into him, the shock of the collision knocking the Bastard down to the ground, where he lay with his horse on top of him. He was not seriously hurt but his horse was badly injured and died soon after. It was declared that the collision had been an accident but some of the surviving chronicles disagree. One eyewitness believed that there was a ‘pyke of iron’ on Woodville’s horse armour, which struck the Bastard’s horse. Any suggestion of dishonourable behaviour in the tourney reflected badly on Edward and the English court, both of whom Woodville represented. The Bastard was offered another horse but, unsurprisingly, he decided to call an end to the fighting and so concluded the first day.

On the following day, June 12th, in foot combat, Woodville and the Bastard struck with such force that they cut gashes in each other’s armour and it seemed inevitable that the fight would end in the death of one or both. They had lost all control of themselves, fighting as though on the battlefield in a very real and aggressive display of miniature warfare; so much so that Edward was forced to intervene before it was clear who had won (or lost), bringing the combat to an abrupt ending by calling ‘whoo!’ By doing this, Edward’s position at the apex of the chivalric hierarchy was reaffirmed, as only he could stop the fight. Both Woodville and the Bastard had fought valiantly in the Smithfield tournament and they ended as acknowledged equals, which was made explicit in their promise not to fight again.

The commitment of both Woodville and the Bastard to a distinct form of chivalrous manhood, reliant on strength and bravery, was unequivocal at the 1467 Smithfield tournament. Despite the obvious levels of danger, both were prepared to risk death and injury on behalf of their rulers as part of a wider display of Anglo-Burgundian relations.

As for Edward, he used the Smithfield tournament to promote his kingship and that of the Yorkist dynasty and as a challenge to those who might seek to deny his right to the throne. By regulating the fight between Woodville and the Bastard, his position within chivalric manly culture was assured.

Emma Levitt completed a PhD at the University of Huddersfield on jousting and masculinity in the reigns of Edward IV and Henry VIII.