Rather than being narcissistic, images of the self were used to represent a spiritual community. 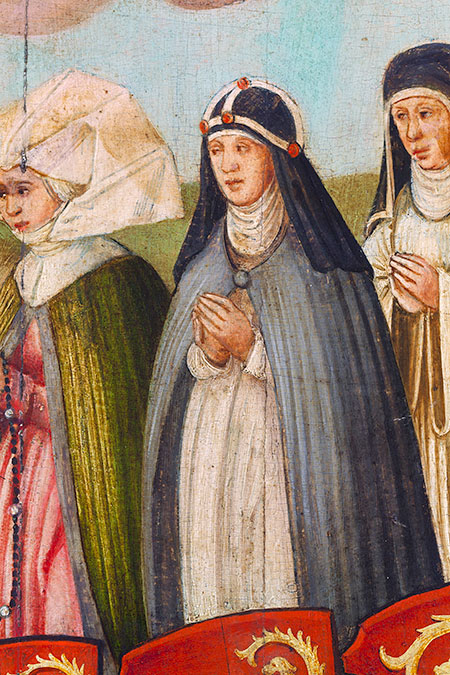 When Katerina Lemmel, a nun in 16th-century Germany, was supervising the installation of stained-glass windows into her religious house, she was acutely aware of how they should, figuratively as well as literally, frame her community. Lemmel was managing identities through images. Her goal was long-term – she was creating a memorial for the future. For Lemmel, her windows were her self-memorialisation.

Self-memorialisation – the curation of one’s own life and image for posterity – has preoccupied people for centuries. The modern-day ‘selfie’ is not without its critics; commentators and critics scoff that it is just a way of forging your own ‘brand’, the pinnacle of self-absorption. Yet for pre-modern people like Lemmel, self-memorialisation was central to their relationship with the world around them, as well as the heavenly salvation they hoped would follow. Self-memorialisation was not trivial but absolutely crucial to both their present and their afterlives.

Lemmel is not depicted in the stained-glass windows herself. Instead, it is the religious identity of her convent community that she wanted to show. Her letters, which document the process, reveal a keen artistic eye and a clearly asserted idea of the sort of religious imagery she liked, and what she did not. Though ‘some windows please us very much’, she complained bitterly to her cousin, the patron of the convent renovation, that some artists ‘always want to make [the Passion of the Christ] in a new strange way’. Her deriding of a fat, red-haired Jesus, rather than the tortured, thin, figure that she wished to see, is testament to how she wanted the spirituality of the convent to be rendered – ‘He should have painted him in a red mantle, all wounded and bloody.’

The choice of Christ suffering on the cross is a deliberate one: aimed at ‘arousing spiritual desire’ in the nuns who saw the images every day, she consciously wanted the devotional identity of her convent to be remembered. Reinforcing the communal piety of the nuns, who would witness and experience the devotional image that would stare back at them from the stained glass every day, was paramount to the windows’ purpose. It committed to the nuns’ memories the religious character they shared and within which their daily lives were reflected. Forming their identity in this way is vitally important in communicating the future togetherness of the convent and Lemmel knew it: ‘the sisters will process past [the images], chanting songs of praise, everyday and on holidays’. While it is not an image of the physical self, it is very much that of the spiritual self.

Lemmel, furthermore, included specific, named memorials of her patrons in the stained glass: ‘We have placed the Coronation of the Virgin above the coat of arms of my dead departed cousin … we thought we wanted to have all of your names written in large letters on the wall above them, in the order of your age, for a memorial.’ As the nuns pass by, she suggested, ‘they will commemorate the people whose coat of arms they see’. In doing so, the stained-glass windows gave the patron family the precious ability to live on in a spiritually important place, remembered, and therefore prayed for, by these enclosed women. To have themselves recorded in this visual way was vital for the good of their souls.

Yet in placing the names of the patrons in these images, Lemmel’s self-memorialisation goes further. She hoped to solidify advantageous, practical links between her convent and the families of her wealthy patrons. Though the images were meant to outlast them as individuals, they would not outlast them as a community.

Lemmel’s desire for the visual self-memorialisation of her convent through stained-glass windows was just one of many ways a pre-modern person might want to preserve and communicate their memory. Whether through a manuscript illumination and dedication, a painting incorporating their likeness into a biblical or classical scene or a carved stone memorial for the local church years before the death of the patron, self-memorialisation presented a way to record, display and, crucially, communicate people’s identities in ways that were important to them as individuals, families or communities.

For critics, modern ‘selfies’, shared through social media, appear to be the pinnacle of the emptiness, the spurious, digital embodiment of the disconnect between modern life with meaningful human interaction. Yet for Lemmel, her 16th-century Bridgettine sisters and for countless other pre-modern people able to commemorate their own lives in visual ways, self-memorialisation was a tool for communicating and outreaching for their current lives, as much as the life to come.

Elizabeth Goodwin completed a PhD researching medieval nuns at the University of Sheffield.