The Riot Police who Revolt France

France’s elite police unit is being compared to the SS – not for the first time. 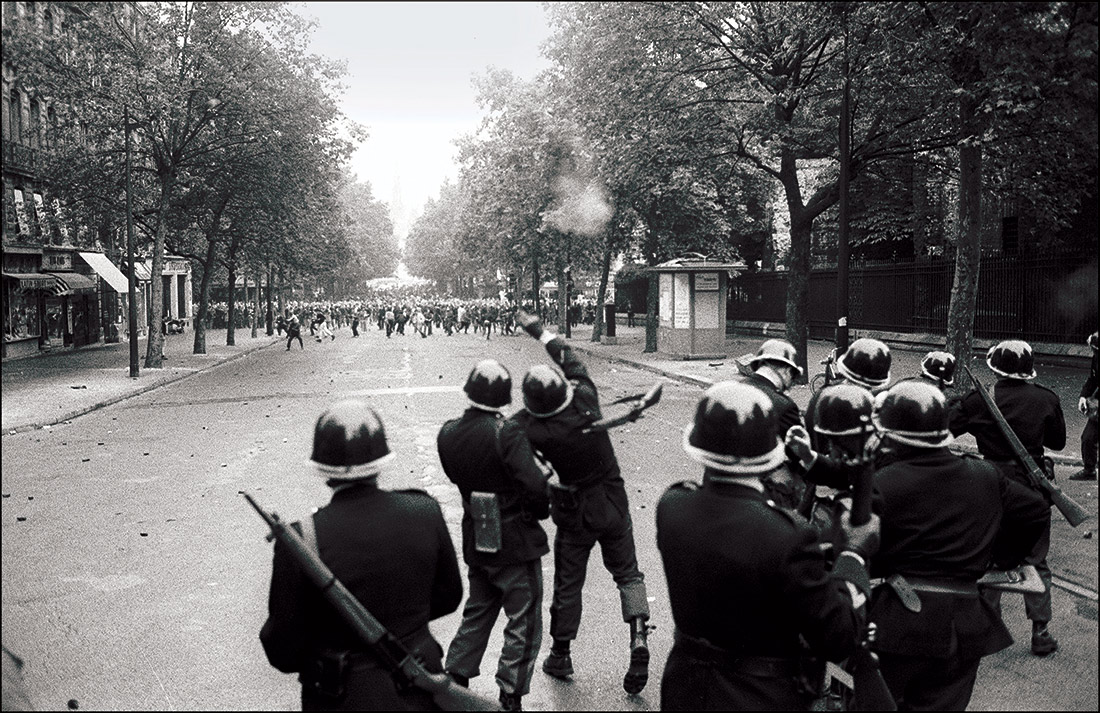 The gilets jaunes (yellow vest) movement has reopened old wounds in France, and also resurrected some old chants. During the 1968 student uprising there was one refrain above all others that reverberated through the rues and boulevards of Paris as protesters battled with police: ‘CRS = SS’. Half a century later a new generation of demonstrators is drawing the same comparison between the Compagnies Républicaines de Sécurité [CRS], France’s elite police unit – which describes itself as ‘specialists in the maintenance of order’ – and the Nazi’s protection squad, the Schutzstaffel, as they vent their fury against rising taxes and falling wages.

In 1968 the coverage of the clashes was confined to black and white television pictures and newspaper columns. Writing in The Times on 13 May, Charles Hargrove described a confrontation outside the Sorbonne between the CRS and students. ‘The glint of a helmet and the shine of a black police macintosh were occasionally caught in a street light’, he wrote. ‘The troops adjusted the chinstraps of their helmets, and their goggles; tightened their grip on their long night sticks, and checked their tear gas grenades. Then they moved on, in columns of companies, down the boulevard towards the barricades.’

The violence that followed shocked France. As cobblestones rained down on the heads of the advancing CRS, they responded with tear gas. A French press colleague of Hargrove’s remarked: ‘It’s no ordinary tear gas. It’s got chlorine in it. It’s the kind of stuff the Americans use in Vietnam.’

The gilets jaunes movement took to the streets last November in protest at rising fuel taxes, but subsequently their anger has grown to encompass a general disenchantment with globalisation. The protests have frequently descended into clashes with the CRS. It is not tear gas, however, that is doing the most damage to demonstrators, but a different weapon: the LBD [Lanceur de balle de défense].

Better known as a ‘flash-ball’ gun, it fires pellets of rubber or foam at a speed of up to 100m per second. Its makers claim that they do not break the skin, but in recent weeks a growing number of protesters have been hospitalised with serious injuries caused by the pellets. Unlike in 1968, many of the incidents have been filmed and uploaded onto social media.

On 26 January, one of the de facto leaders of the gilets jaunes, Jérôme Rodrigues, was shot in the face by a rubber bullet as he live-streamed the 11th weekend of protests from the Place de la Bastille. His injury – one of dozens caused by the weapon – is being investigated by the police complaints authority amid allegations he was deliberately targeted.

Such incidents will surely lead to more hostility and more online insults. In December, a photograph appeared on social media depicting the CRS in 2018 and the Waffen SS in 1944. Alongside were the words: ‘We were only obeying orders.’ Yet, contrary to popular belief, the students of ’68 were not the first to compare France’s specialist riot police to the SS. Most of them were not even born when the Nazis occupied France.

The CRS was raised in December 1944 as an elite unit to safeguard the Republic amid fears of a Communist insurrection. Its remit was expanded three years later to deal with the growing unrest throughout the country caused by food rationing, a poor harvest and coal shortages. In the autumn of 1948 the CRS, acting on the orders of Jules Moch, the Minister of the Interior, was ordered to bring thousands of striking miners to heel. It did so with bullets, killing several and wounding hundreds.

Condemning the killing, Alfred Malleret-Joinville, a Communist MP who had been a general in the Free French Forces of the Interior (FFI), recalled the courage of young communists who, in November 1940, had demonstrated outside the Gestapo HQ in Paris after the arrest of the scientist and fellow Bolshevik Paul Langevin. ‘The students who commemorate their heroic gesture in 1940 [found] themselves facing, as they did in 40, the SS, men armed and helmeted, the CRS of Monsieur Jules Moch’, he said. Commenting on the CRS = SS slogan in 1955, the future president of France, François Mitterrand, remarked: ‘A rich rhyme but a poor content.’

The three decades after the war are remembered in France as the Trente Glorieuses, but while the country boomed economically, a cultural chasm was growing between the patriarchal Establishment and a generation of young liberals. A march in Paris on 8 February 1962 in support of the Algerian War of Independence ended in tragedy when the police, including three companies of CRS, killed nine demonstrators at Charonne metro station. Six years later the students rose up against an Establishment whose brutal authoritarian rule was, in their eyes, epitomised by the CRS.

What struck Charles Hargrove in May ’68 was the allegiance of ordinary Parisians. ‘People on the upper floors of apartment houses on the other side of the street from the gardens began throwing flower pots, stones and anything that came to hand on to the police massed below’, he wrote. Expressing his surprise to his French press colleague, Hargrove was informed: ‘The inhabitants of the Latin Quarter are with the students. They can’t stand the police.’

The pitched battle of 13 May was the beginning of the end for the rule of President Charles de Gaulle. The next day he left France for a state visit to Romania and his prime minister, George Pompidou, said to a colleague: ‘The General is no longer the same man. He no longer has the same sensitivity about the consequences of the initiatives he takes, or the impact of the remarks he makes.’

Similar criticisms have been levelled at President Emmanuel Macron in recent months. The difference between now and 1968 is that the gilets jaunes movement is not confined to the left. ‘The French aspire to order’, tweeted Marine Le Pen, the leader of the far-right National Front in January. ‘But order is not the mutilation of political opponents and the use of unreasonable force.’

France’s current moment of déjà vu is a dangerous one. It does not bode well for the president or his police.

Gavin Mortimer is the Spectator’s French correspondent. He writes about the French Resistance and the SAS.