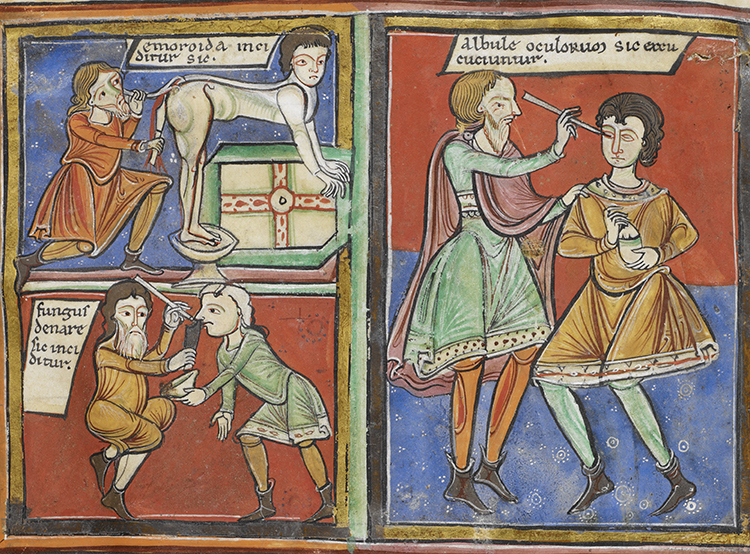 In early 2015 the University of Nottingham’s AncientBiotics Project announced that a simple Anglo-Saxon remedy to cure a stye in the eye, recreated in a lab, could combat the bacterium known as MRSA. This exciting and important discovery attracted international attention for the small, rather nondescript manuscript in which the remedy was written, a tenth-century Anglo-Saxon medical manuscript often referred to by its more colloquial title, Bald’s Leechbook.

The manuscript as it now exists consists of three books. The name Bald’s Leechbook comes from a Latin colophon copied at the end of the second of the three books in the manuscript, naming Bald as having ordered them to have been copied or compiled (conscribere). The location of the colophon, at the end of the second book and before the table of contents for the third, suggests it applies only to those first two books in the manuscript. These two books, the ‘leechbook’ brought together by Bald, were created to be used as a single unit. The third book contains many remedies that are not included in the first two, suggesting it may have been created as a supplementary text.

The surviving manuscript is a copy of two earlier manuscripts, now lost. The first, perhaps the ‘original’ Bald’s Leechbook, may have been completed at some point in the ninth century. After that point, readers began adding remedies as they came across them and made changes to others. These included a letter from Elias II, patriarch of Jerusalem, to King Alfred of Wessex that mentions a number of exotic materia medica and their many uses, which were presumably sent from the Middle East to the Anglo-Saxon monarch at the end of the ninth century. Later readers also translated and added a number of prognostics texts which attempt to predict a positive or negative outcome for certain medical procedures based on natural events. For example, a text on phlebotomy says that bloodletting should be avoided between the middle of July and the first week in September because ‘all venomous things fly’, which could mean that both disease and insects were rampant at that time of year and both could lead to infection.

A medical text written in Old English was clearly intended for use by Anglo-Saxon physicians and readers and the interest in maintaining and augmenting the collection confirms that it was.

In the mid-10th century, the combined texts and adaptations of the original manuscripts were copied by a single scribe into the existing manuscript. We cannot be certain whether this was because the original copies were showing significant wear or because someone wanted all three books in the same binding. We do know, however, that the manuscript was valuable enough to someone to be re-copied so that the process of reader interaction could start again. And Bald’s Leechbook did not cease to be of interest after the Norman Conquest of 1066. The manuscript shows evidence of a number of readers who used the manuscript years after the Norman invasion, in a time when Old English had long since become the language known today as Middle English and when a level of learning and interest in the past was needed to understand it.

Considering this, a surprising number of later medieval readers have made their marks on its pages. In the late 12th and early 13th century, readers began to use a distinctive mark created by using the word nota, often written vertically down the margin, to indicate the importance of a section of text:  the equivalent of highlighting the passage. Nota marks occur throughout the manuscript, but there are some chapters that have a greater number and variety, suggesting these areas were of particular interest to later medieval readers. The chapter on diseases of the eye and the dimming of one’s eyesight, for example, has a number of such notations. It is no surprise that readers of manuscripts, or even those who were engaged in writing manuscripts, would find these medical remedies of interest: failing eyesight due to reading or writing by candlelight was a common ailment in the Middle Ages. It was common enough that eyeglasses were invented by the end of the 13th century.

The next largest gathering of nota marks occurs at the end of the first book, where several different readers have called attention to the prognostics on bloodletting, as well as a number of smaller chapters on skin ailments: verucas and warts, nail infections, itching and swelling. One medieval reader wishes his/her fellows to nota totum (note all) of the chapter which includes three Anglo-Saxon remedies for hangovers (‘in case a man gets himself too drunk’).

Although interest in the treatment of external disorders seems to have been on the mind of the 13th-century readers, there is one marginal notation that refers to two remedies, wiþ deofle ... 7 ungemynde (against the devil ... and dementedness), which includes masses and blessings to be said over the drenc wiþ deofles costunga (drink against the devil’s temptation). The notation is preceded by a small nota mark and translates as:

How in all drink and in all medicine for those affected by black bile and evil spirits, holy water should be combined and it is to be sung with both psalms and prayers just as in this chapter it is sufficiently instructed.

Whether late medieval readers of the manuscript were actually putting the remedies they highlighted to use is unknown. The number and variety of nota (and nota-style) marks suggests many readers across several hundred years, demonstrating a continued engagement with the manuscript’s contents. The late medieval notations are of particular interest and the comment that ‘just as in this chapter it is sufficiently instructed’, demonstrate an understanding of, and interaction with, Old English at a time when the vernacular language had undergone significant changes.

Like their Late Medieval counterparts, modern scholars interested in the efficacy of Anglo-Saxon remedies keep returning to the three Leechbooks for the answers. The AncientBiotics Project is the first to successfully demonstrate such efficacy and in turn has helped raise awareness of the medieval study of medicine long before it became part of the medieval university curriculum.

Christine Voth is Lecturer in Medieval Studies at the University of Göttingen.