A General State of Mourning

The 18th century saw many royal deaths, all of which had to be mourned. The effect was felt in every part of life. 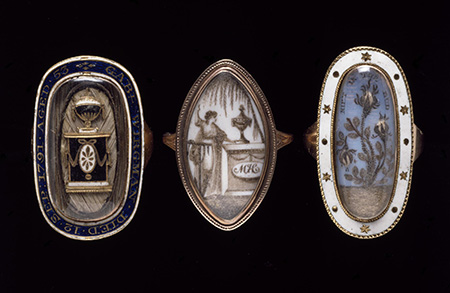 The century Between 1700 and 1800 saw the deaths of four British monarchs, two consorts, one Prince of Wales, one dowager Princess of Wales and an assortment of other princes and princesses. Virtually all were remembered by a period of widespread public mourning. This was expressed in a variety of ways, most notably by the donning of primarily black clothing by huge swathes of the population, often for months at a time.

The length and extent of public mourning varied and depended upon the position of the deceased within the royal family and the directions of the monarch. Mourning for William III ended 11 months after his death and on the birthday of his successor, Queen Anne. She, too, was mourned for a year, as was George I. George II, however, received only six months, thanks to a change he himself had implemented in 1728. This halved all future mourning periods and was motivated in large part by a need to assist the textile industry, which often faced ruin when stocks of luxury and coloured fabrics became instantly unsellable.

To ensure synchronised mourning (in southern England at least) and to clarify for the public what clothing was acceptable, mourning orders were issued and placed in newspapers, with mourning delayed until a week or so after the death to allow people to update their wardrobes. Sufficient time was not allowed for the information to reach more provincial regions though, let alone Ireland or the north of Scotland, and as a result mourning frequently began late in these areas.

In the early part of the century, mourning orders were fairly rudimentary: on the death of William III they stipulated only that all persons ‘put themselves into the deepest Mourning that may be’. By the time of George I’s death, however, mourning had become far more elaborate and the use of phases was emerging, which varied in length and had their own specific sartorial requirements. As well as clothing, mourning touched many other aspects of life. Churches were hung in black, their bells muffled and sermons and eulogies (which might later be published) were preached from their pulpits. Theatres closed and court functions were suspended. Many even chose to seal their letters with black wax. So pervasive was public mourning, in fact, that it must have been hard to avoid completely, even for the poor or disinterested.

Given its expensive and oppressive nature, one might reasonably wonder at the longevity of state mourning, which continued beyond the 18th century. Few would have known the deceased well enough to feel genuine sadness and there were frequent complaints about the expense and inconvenience of mourning them. No doubt many simply went through the motions out of deference to convention and a sense of loyalty to the institution of royalty, but perhaps more important is the fact that mourning was not all bad. Purveyors of high fashion might suffer, but the manufacturers of Norwich crape (which increasingly became the must-have fabric for such occasions) could turn a tidy profit from a royal death, while the rich and snobbish could use the opportunity to show off their wealth and social status through their ability to purchase new clothing at short notice. Even some of mourning’s more irksome aspects might be alleviated by a well-timed death. George I’s passing, for instance, had little effect on the theatre industry, as the playhouses were already closed for the summer. Finally, those at a safe distance from the watchful eye of the royal court could, on occasion, ignore certain aspects of public mourning altogether. The key was safety in numbers. One needed to be surrounded by a like-minded peer group with a blasé approach to mourning and no local grandee of sufficient standing prepared to enforce the rules. The Dublin elite managed just such a feat in the spring of 1738, when mourning for Queen Caroline ceased as soon as the Lord Lieutenant, the Duke of Devonshire, had left the country.

Today few traces of general mourning remain in the UK, though the widespread and spontaneous outpouring of grief upon the death of Diana, Princess of Wales in 1997 shows that it can still emerge, albeit in a different form than that of the 18th century. Indeed, the sense that we know the modern British royal family thanks to the media exposure they are subject to means that, while general mourning is no longer enforced, when it does occur it is perhaps a sign of genuine respect and affection rather than the compulsory duty fulfilled by so many of past generations.

Rachel Wilson is a research fellow at the University of Leeds and the author of Elite Women in Ascendancy Ireland, 1690-1745 (Boydell, 2015).