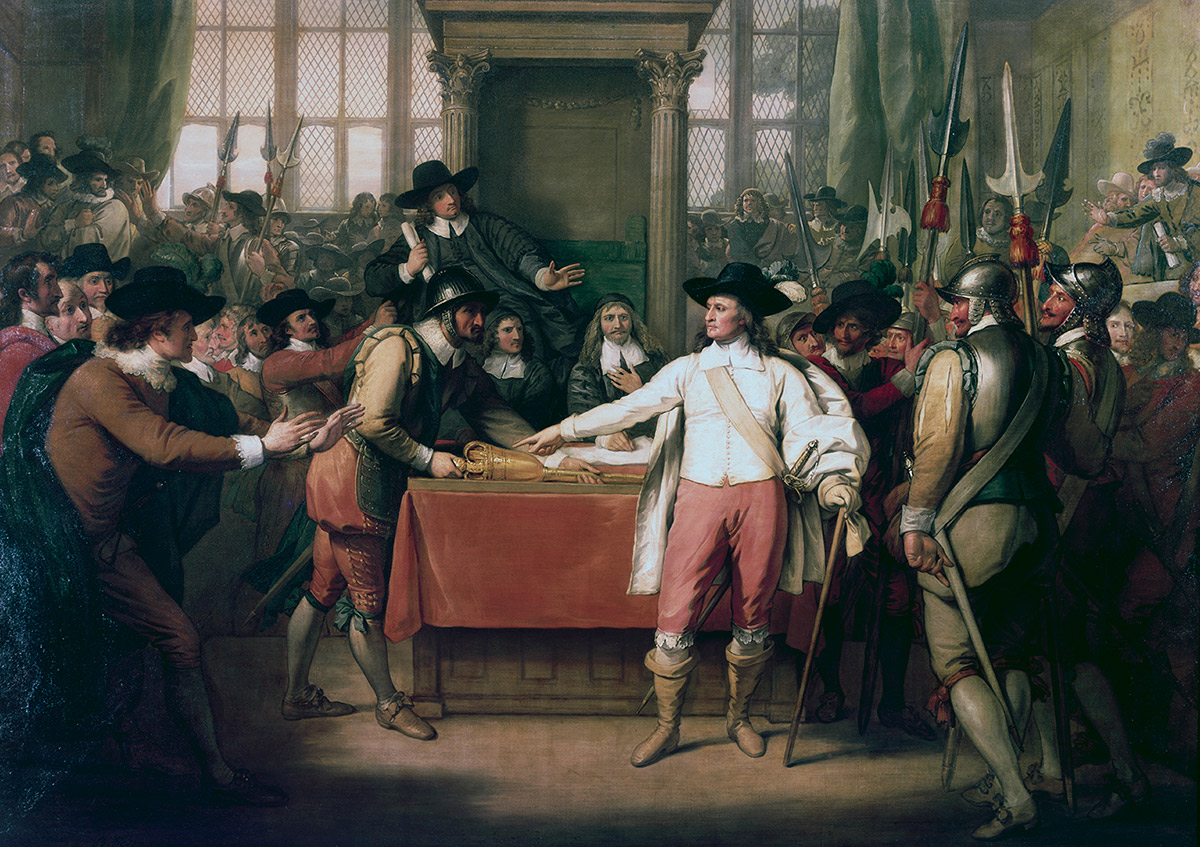 By the early months of 1658, the young English republic was in crisis. Nine years earlier, after a decade of civil war and three years of famine, leaders in the New Model Army had, as the poet Andrew Marvell later put it, ruined ‘the great work of time, / And cast the kingdom old / Into another mould’. In early December 1648, frustrated by the ambiguities and hesitations of those negotiating with the defeated king, a detachment of soldiers purged Parliament of its most conservative MPs, opening the way for the hasty organisation of a High Court of Justice and the consequent trial of Charles I. As the king resisted the legitimacy of the court and refused to enter a plea, power passed to the more radical military and political leaders, as they became increasingly interested in exploring republican solutions to the political crisis. After multiple attempts to have Charles recognise the court by entering a plea, his judges found him guilty of treason. He was beheaded on 30 January 1649 outside Westminster Hall and, four months later, England was formally established as a republic.

The English republic was rooted in the religious and political idealism of its visionaries, administrators and apologists. As Bernard Capp demonstrated, in England’s Culture Wars (2012), the new regime set about a comprehensive programme of moral and social reform. The Cromwellian vision for a godly nation was energetically pursued, though it achieved more in some areas than in others. New laws made adultery a capital crime. Popular pastimes, including drinking and horse racing, were carefully controlled. The legislation promoted a ‘reformation of manners’ that was reflected in a new republican aesthetic. The visual culture, as in Robert Walker’s portraits of the leaders of the new regime, and public oratory on major state occasions, such as the sermon preached by John Owen at the funeral of Henry Ireton, promoted personal religion, moral sobriety and civic responsibility as the virtues that would enable and sustain the revolutionary regime.

But fashions in the court were changing. The move, in 1653, from Commonwealth to Protectorate alienated the most ideological republicans, who felt that the transition to a single office of leader was betraying the aspirations of ‘generation 1649’. In 1657 some of those who had supported the Protectorate blanched at the offer of the crown that was made to Cromwell in its second constitution. At the same time, the regime’s growing number of critics began to notice that the programme for a reformation of morals seemed to focus more on the disruptive habits of the lower orders than on the recreations of the new elites. While local magistrates pressed hard against popular music and dancing, the Cromwellian court was slowly returning to these traditional festivities. In November 1657, the French ambassador noted a ‘different spirit’ in Whitehall, at the wedding of Cromwell’s youngest daughters, ‘dances having been held there again during these past days, and the preachers of the older times are withdrawing from it’.

Some of those who had been most committed to the regime struggled to make sense of its new face. John Owen, the leading Congregationalist minister, who had preached a commemorative sermon to MPs on the day following the regicide, was perplexed by its declension: ‘Would anyone have thought it possible that such and such professors, in our days, should have fallen into ways of self, of flesh, of the world’, he wondered, ‘to play at cards, dice, revel, dance?’ Yet these were common pastimes in the Lord Protector’s court. The moral vision that the revolution had idealised was beginning to come apart.

Owen was a key barometer of the republican response to the religious and political backsliding of the Cromwellian regime. He had accompanied the army on its invasions of Ireland and Scotland, had been appointed dean of Christ Church and vice chancellor of the University of Oxford and had acted as the chief architect of Cromwellian religious policy. He had served, briefly, as an MP in the first protectoral Parliament, where observers noted his links with republican critics of the Protectorate. His disenchantment with the direction of the government had become known among the faction of army radicals associated with General Charles Fleetwood. In 1657, Owen drafted the petition of the army officers, which protested Cromwell’s being offered the crown. The petition was successful and Cromwell refused the throne, but his friendship with Owen was never the same. Owen’s criticism of the regime became more pronounced. After Cromwell’s death, in September 1658, the senior officers with whom Owen was identified were not impressed by Richard, Cromwell’s son and successor as Lord Protector. The republican officers planned to reassert the ideals of the revolution by undermining Richard and, they hoped, replacing his government. It was December 1648 all over again – the officers were planning a coup.

Their gamble failed. They succeeded in removing Richard from power, but at the cost of losing control of the London crowd. The factional politics created by this political vacuum destabilised the government. In the uncertainty that followed – which seemed to many observers to threaten a third civil war – General Monck purged his Scottish army of republican radicals and began a long march south. Owen and other republicans wrote to ask his intentions, but his answers were ambiguous and evasive. What was clear was that the revolution was being unwound. Republican idealists had scuttled the government in the hope of renewing the ideals of the revolution. It was too much to hope for.

The English republic did not collapse because of external pressures. After all, the revolutionary regime had excelled in its military activities: having conquered Ireland, Scotland and Jamaica, and having quashed the last serious Royalist rebellions, its future might have appeared to be secure. Instead, the republic collapsed in upon itself. It grew increasingly indebted to the military and by the later 1650s the arrears of pay that were owed to soldiers grew so significant as to threaten to bankrupt the regime. Its administrators pursued different political settlements for England, Ireland and Scotland, creating strategic ambiguities as to what a republican government should look like and the extent to which it should draw in at a local level the traditional social leaders. Most seriously, the republic proved to be incapable of sustaining the religious and political ideals upon which it had been founded.

Monck’s intervention made possible the election of a new Parliament, the Convention Parliament, which, to no one’s surprise, voted to recall the king. In May 1660, on his 30th birthday, Charles II marched into London.

The English republic was over, undermined by its own political ends.

Crawford Gribben is Professor of History at Queen’s University Belfast and the author of John Owen and English Puritanism: Experiences of Defeat (Oxford University Press, 2016).