A letter from the teenager Margery Brews to her suitor John Paston contains the oldest surviving Valentine greeting in English. It is an extraordinary window on love and marriage in the late Middle Ages. 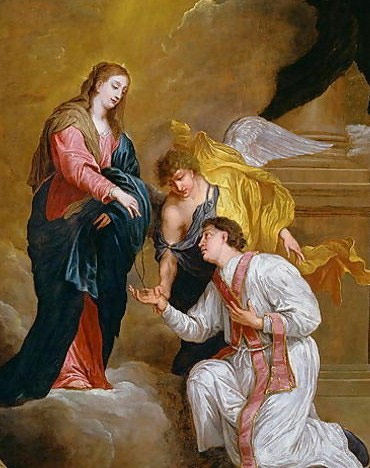 By the late 14th century, the feast day of a martyred Roman saint named Valentine was strongly enough associated with lovers that Geoffrey Chaucer could write that the holiday was when ‘every bird cometh there to choose his mate’. Yet the first Valentine greeting in English that is preserved dates from 1477. It is a letter from the teenage Margery Brews to her neighbour and suitor John Paston. It discussed the negotiations for Margery’s hand in marriage between John and her father, Sir Thomas Brews, which had come to a standstill over the matter of Margery’s dowry. She addressed John as ‘my right well-beloved Valentine’ and promised to love him ‘truly over all earthly things’ even if he had a far smaller estate. The letter has charmed generations of historians, with Sarah Peverley describing it as a ‘testament to the power of love’. Every February the letter is unearthed by enterprising journalists keen to pad out articles on the history of England’s most romantic day.

It is tempting to take the letter – with its endearments, declarations of heartache and insistence on keeping the letter secret – at face value. Among the often dry correspondence of the 15th century, it feels like a breath of fresh air: an authentic representation of the romantic hopes of a young medieval woman. Yet to take this as merely an artless expression of affection is to ignore its value as a rich source regarding the complications of medieval courtship and to underestimate the bargaining powers of an enterprising teenage gentlewoman.

In 1477 John Paston, the second son of the Norfolk gentleman and lady, John and Margaret Paston, was 33 years old. Two years later his older brother (also John) would die of a sudden illness and he would inherit the family estate. But John’s greatest hope of finding a fortune was a profitable marriage. The Paston correspondence shows that he had been on the hunt for a wife since 1467; the letters record at least ten failed attempts to make a match. A wealthy single woman of childbearing age was the greatest prize of the medieval marriage market and the second son of a gentle though not noble family was hardly the most eligible prospect for her and her family. A decade on, the situation must have seemed desperate for him. Perhaps this was why he turned his attentions to the Brews: they were respectable and comfortably settled, though not rich, and there may have been a time when the ambitious Pastons did not see them as a profitable enough option. Or maybe it was simply because before then, Sir Thomas Brews’ eldest daughter was not old enough to be a serious prospect. In her late teens, Margery may suddenly have become an attractive possibility.

We do not know when John’s courtship of Margery began, but a letter from Elizabeth Brews inviting him to visit for the feast of St Valentine to ‘bring the matter to a conclusion’ suggests that an offer for her hand was about to be made. Despite his need to find a wife, John was not willing to settle for less than he felt he deserved and he pushed Sir Thomas hard to provide a better dowry than Margery had been promised. Thomas, meanwhile, was reluctant to ‘settle too much upon one daughter’ when Margery had younger sisters who would need dowries in due course. A few days after sending her passionate first letter, Margery wrote a more pragmatic note to John. Referring to the ‘matter between my father and you’, she baldly stated: ‘I let you plainly understand that my father will part with no more money except £100 and 50 marks, which is far from the accomplishment of your desire. Wherefore, if you could be content with that and my poor person, I would be the merriest maiden on earth.’

Margery presented herself as a dutiful daughter and future wife, supposedly leaving the financial wrangling solely to the men. But her self-deprecating reference to her ‘poor person’ seems to me to be a subtle reminder that she, rather than the dowry, was the real prize of the negotiations. In her previous letter she had assured John of her passionate feelings; this letter showed her skills as a negotiator, softening her father’s final offer with a reminder of John’s capacity to make her happy.

Despite Margery’s stated desire that John keep her first letter private, both messages were dictated to the family scribe and were unlikely to have been composed in secret. Indeed, whether we assume that Sir Thomas Brews was using Margery as a tool in his negotiations with John, appealing to his affections to get him to accept a lower offer, or rather that these letters were Margery’s initiative, these letters are probably more reflective of familial collaboration than individual passion. While medieval people valued the love between husband and wife, in courtship the needs of the family as a whole came before the desires of the couple. Here the Brews family had decided they wanted to win John and what they were willing to pay for him. They presented a united front and, in the end, John accepted their terms. Margery and John were married that year.

Did he give in because he had no other options? Perhaps. We have no evidence in 1477 that he was as in love with Margery as she claimed to have been with him. But in 1484 Margery wrote to John, who was in London on business, and requested that if he planned to stay in town long that he send for her, for ‘I think it is a long time since I lay in your arms’. Seven years, several pregnancies and the everyday business of marriage had not quelled Margery’s desire to be held by the man she addressed as ‘my own sweetheart’. Perhaps that tender admission in a letter otherwise taken up with family business reveals the true romance of Margery and John Paston.