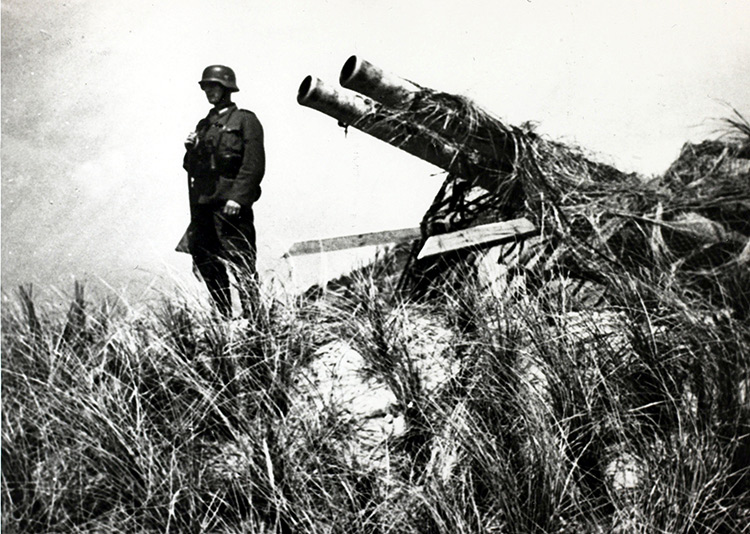 For five years it was as idyllic as war could be. But for the last six weeks – extending beyond the official end of the Second World War – it was bloody carnage. Those who were once comrades in uniform suddenly took to butchering one another in a conflict that has come to be called 'Europe's last battle'.

Photographs of German soldiers, who in the Second World War were stationed on the pastoral island of Texel, the largest of the West Friesian Islands, show them beaming as they write home. Texel (pronounced 'tessel') was a plum posting, a gem of endless sandy beaches surrounding productive fields of grain, potatoes and pasture for contented sheep. By April 1945, in what everyone knew were the last days of an appalling conflict, the 1,200 Wehrmacht soldiers on Texel had good reason to hope they would see war's end without firing an angry shot.

But early on the morning of April 6th, tranquility turned to terror as Wehrmacht soldier slaughtered Wehrmacht soldier, using everything from bayonets to artillery. Friend and foe were distinguished by one small difference in their uniforms: some 800 of the men wore a small patch identifying them as Georgians, while 400 officers and non-commissioned officers were German.

The Georgians had begun the war not in German uniforms but Soviet. In 1941, when the USSR mounted a desperate resistance to Hitler's massive invading army, the Soviets pressed every citizen into service. Coming from Stalin's birthplace, Georgian citizens were given Soviet colours and weapons and thrown into the defence of the motherland.

The Georgians, captured earlier on the Eastern Front, were given a dismal choice. They could accept prisoner of war status with a future promising hunger, abuse and possible death, or they could enlist in the Wehrmacht. The choice of some 30,000 Georgians to don a German uniform was understandable but it made them traitors.

As the end of the war loomed, the Texel Georgians' future looked bleak – a return to retaliation and punishment in the USSR. Fearing that fate, the members of the 822nd Battalion, having already replaced Soviet uniforms with German ones, changed their allegiance again, back to the Allied side.

Inside their barracks just after midnight on April 5th-6th, 1945, the Georgians turned on their German comrades, killing many of them with bayonets and knives in coordinated attacks. But some, including the commander, Major Klaus Breitner, who had spent the night with his mistress in the village of Den Burg, survived. Breitner and a few other German survivors were able to escape to the mainland.

On April 6th Breitner launched a counter-attack, having mobilised a force of 2,000 marines and members of the feared German SS. What had appeared to be a complete Georgian victory was quickly reversed. A house-to-house hunt for Georgians swept through Texel.

Captured Georgians, including 57 who finally surrendered control of the lighthouse where they had barricaded themselves, were forced to strip – their mutiny having disgraced their uniforms – and dig their own graves. Over 130 of them were executed in this gruesome fashion.

Texel was turned into a scene of carnage that spared no one, including civilian Dutch inhabitants. Resistance forces and ordinary citizens who sheltered and helped the Georgians were executed and the villages of Den Burg and Eierland saw serious damage to homes and buildings as the Germans exacted their revenge. 'Texel is under a reign of terror', wrote one Texeler.

Even the surrender of German forces throughout the Netherlands on May 5th and the official end of the war on May 8th brought no end to the slaughter, as the German execution campaign continued for almost two more weeks. The death toll in the six-week battle was 812 Germans, 565 Georgians and 120 Dutch.

Throughout the nightmare, Texel received no Allied assistance. Only on May 20th was a small unit of the Canadian First Army sent to the island to negotiate an end to the conflict.

The Canadian commander on the scene was so impressed by the Georgian resistance that he refused to class the 228 survivors as enemy personnel. Lieutenant-General Charles Foulkes wrote to the Soviet High Command urging clemency for the Georgians. This would have been a significant bending of the rules agreed upon by the Big Three leaders at the Yalta Conference that all nationals would return to their homeland at the end of hostilities.

Stories circulated that the surviving 228 Georgians would not have to return to the USSR. But, if the promise was made, it was revoked over the course of the next few weeks and the surviving Georgians were despatched to their home country.

Contrary to expectations of retribution, in 1946 the Soviet daily newspaper Pravda praised the Texel Georgians as 'Soviet patriots' and wrote of them as rebelling prisoners of war. Soviet officials also visited the island regularly after the Second World War to pay tribute to the Georgians' anti-German resistance.

Today, few pause at the collective grave of 475 Georgians killed in combat or through summary execution, their resting place marked by 12 rows of red roses and a simple cairn. Europe's last battlefield is silent, remembering the murderous nationalist antagonisms unleashed on it when the outcome of the Second World War was already decided.