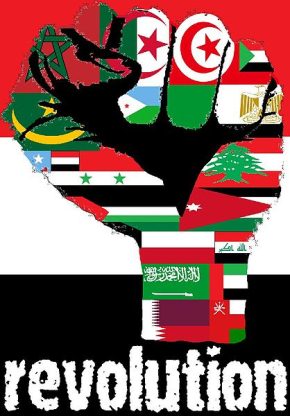 The Arab revolts have come in waves. Beginning in Tunisia, unrest spread across Egypt, Libya, Algeria, Morocco, Jordan, Bahrain, Oman and Yemen within weeks. Chants against autocratic rule echo beyond the Arab world, in Iran and China. Dictators between Central Asia and Sub-Saharan Africa follow the rapid escalation of events with apprehension. Most commentators are captivated by the momentum of the revolutionary wave. For historians, though, the phenomenon is anything but new.

Few events in history have captured the attention of scholars more than revolutions. Over centuries revolts have brought about the most radical change of political order in societies – and they have spread, crossing borders and even oceans, at times engulfing entire regions of the world.

More closely linked were the upheavals of 1848. Across Europe, revolutionaries, radicalised by the ideas of liberalism and nationalism, went to the barricades to confront absolutism. Revolts began in January in the streets of Palermo, the Sicilian capital, soon sparking unrest on the Italian peninsula. The February Revolution in France toppled King Louis-Philippe and led to an escalation of events. Civil war spread across the German states, the Habsburg Empire, Denmark and Ireland. In many places martial law was declared and most upheavals were put down, with thousands killed. For many who took part in the uprisings the international scope of their revolt was crucial. In early 1848 Marx and Engels published the Communist Manifesto calling on ‘workers of the world’ to unite. For decades socialists would promote the idea of ‘world revolution’, a concept based on the notion of revolutionary waves.

In Asia the events of 1848 were mirrored in the Constitutional Revolutions of the early 20th century. Japan’s defeat of Russia and the ensuing Russian Revolution of 1905 sparked the Persian Constitutional Revolution in the same year, the Young Turk Revolution of 1908 in the Ottoman Empire and, finally, the Chinese Revolution of 1911 and the 1912 Palace Revolt in Siam (now Thailand). In the Russo-Japanese War a non-European country with a constitution had prevailed over a European country without a constitution. Meiji Japan was a shining model of modernisation in the eyes of many activists and reformers in Asia, eager to confront traditional society and autocratic political order. Its example even provoked uprisings in European colonial dominions, most notably in British India and Dutch Indonesia.

Surprisingly, the immediate effects of the October Revolution of 1917 were less extensive. Outside of Russia most attempts to establish socialist states were soon shattered. The November 1918 Revolution in Germany and the proclamation of the Munich Soviet Republic, the socialist uprisings in Italy, the Hungarian Revolution of 1919 and the foundation of the Hungarian Soviet Republic all failed, as did the Iranian revolutionaries, who, led by the charismatic guerrilla leader Mirza Kuchik Khan, in 1920 proclaimed the short-lived Persian Socialist Soviet Republic.

More intense was the wave of anti-colonial and national upheavals after the First World War. Fuelled by President Wilson’s promises in 1918 of national self-determination, anti-colonial demonstrations ensued in Egypt, India, Korea and China. In Cairo, Egyptian women, for the first time in history, went onto the streets to join in public protest. In the end, the moment of upheaval, the ‘Wilsonian Moment’, as the Harvard historian Erez Manela called it, receded. The European powers were unwilling to grant freedom. Hopes for national independence and sovereignty remained unfulfilled.

Soon, however, anti-colonial revolutionaries would rise again. During the Cold War several chains of revolutions shocked Africa, South-East Asia, the Middle East and Latin America. Marxist slogans of world revolution fired American paranoia about the spread of Communism through a domino effect. Ironically, the Cold War ended in a wave of demonstrations that overthrew the Communist regimes of Eastern Europe. Protests began in Poland, spread to Hungary, East Germany, Bulgaria and Czechoslovakia and finally reached Ceausescu’s Romania in December 1989. Earlier that year, in China, the Tiananmen Square protests were crushed in a bloodbath, while Communist rule was abandoned across most of Asia and Africa. For contemporary observers these events marked nothing less than the definite victory of liberal democracy – the ‘end of history’, as the American intellectual Francis Fukuyama rejoiced prematurely. Since then new waves, the Colour Revolutions in the Ukraine and Georgia and the current upheavals in the Middle East, have followed.

Scholars have enquired into general patterns of revolutionary waves, seeking to understand the mechanisms that make them spread. A crucial condition, they agree, is communication. In the Atlantic Revolutions, which stretched over more than two decades of the 18th century, revolutionaries and their ideas could only cross the ocean by sailing vessel. As modern communication developed, the pace of revolutionary waves increased. In 1905, when the Constitutional Revolutions shook Asia, revolutionary slogans were circulated by the telegraph and modern means of transport, by railways and steamers. In the course of the 20th century technological innovations became ever more important for the expansion of political mass mobilisation. Drawing on satellite television, mobile phones and the Internet, the Arab revolts spread in weeks. Within seconds, revolutionaries send their messages against tyranny around the world. Unsurprisingly, dictators today feel uneasy about social media websites like Facebook and Twitter.

Over the last two centuries revolutionaries have celebrated epochal victories, but most of the time their protests have ended in tears and disillusionment. Even within a revolutionary wave, the outcomes have often varied considerably from country to country. Revolutions are usually commemorated as distinct national events. The French Revolution is and remains ‘French’ in that country’s popular memory, just like the Persian Constitutional Revolution of 1905 is remembered as an ‘Iranian’ event in Iran and the Egyptian Revolution of 1919 as an ‘Egyptian’ revolt by Egyptians. In German national commemoration, it was protests in Leipzig and Dresden that brought down the wall in 1989. In the age of the nation state, we have come to glorify revolutions as national events. Yet most of the time they were – and are – strikingly international.

David Motadel is Research Fellow in History at Gonville and Caius College, University of Cambridge.