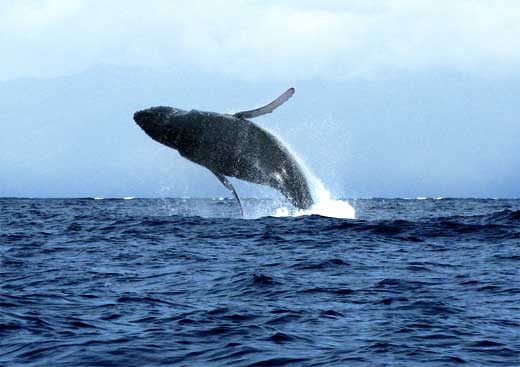 Hawaii was the centre of the American whaling industry when Herman Melville arrived in 1843, broke and looking for work in Lahaina, on the Isle of Maui. It was here he got the idea for Moby Dick. In 1844, 326 whalers stopped off at Lahaina, where they could anchor in safety and replenish supplies.

Two years later, the census showed that this town had a population of 3,557, mostly living in grass or adobe houses, with a mere fifty-nine stone or wood properties recorded. Some of these were inhabited by missionaries who railed against the evils of drink and prostitution associated with sailors. By the 1860s, as the American Civil War raged, whaling began to decline, and sugar became the primary crop. Today, tourism dominates, and consequently, Lahaina is reviving its history.

The Lahaina Restoration Foundation inhabits Baldwin House the first permanent home on the island built in 1834 of coral, stone and hand-hewn timbers. Here lived the missionary and physician, Reverend Dwight Baldwin from Connecticut. Open to the public, it is complete with original furniture, wooden balconies and a fine garden.

A guide points out other old landmarks the Masters' Reading Room, the 1859 Courthouse, and the Pioneer lnn, which dates back to 1901. Ninety years on, visitors who stroll along the restored main shopping street notice that whales again dominate. They appear on a huge seafront mural, on T-shirts sold in aid of endangered species, and in the lists of attractions. Commercial whale-watching is big business in Hawaii, estimated to be worth $10 million a year. That, in turn, has renewed interest in the gory business of killing the world's largest mammals.

A short drive outside Lahaina, in a tourist complex, is the Whalers Village Museum. Here are scale models of whaling ships and a full size replica fo'c'sle, where up to twenty-five men lived in crowded quarters. Although the exhibit is pristine, photos suggest the sordid nature of the nineteenth-century slaughter. Artefacts include harpoons, and a Coalbrook pot for boiling blubber, specimens of scrimbshaw (the sailor's pastime of shell or whale-bone carving), as well as log books and diaries. Next year there will be a second museum, funded through the estate of James Campbell, who built the Pioneer sugar mill in 1860, and made a fortune.

The new museum will emphasise the cycle of humpback whales, which migrate from Alaska and in these warm waters give birth and rear their calves. 'It's an electric feeling when you watch them. You are overwhelmed by their size and gracefulness', said Lewis Eisenberg, the curator. He added: 'This museum will look at their biology, physiology, and pool current research, such as recognition of individual animals through the shape of their tail flukes. Hydrophones microphones submerged off the coastline will enable us to hear their songs'.

The sheer joy and awe that human beings are finding in proximity to these previously threatened mammal is providing the cash to protect the historical infrastructure of Lahaina, the former whaling capital of the world. There are still descendants from the original settlers on the islands, including the Irish who escaped the potato famine to come to beautiful Maui. Lest those who jet into Hawaii forget the long passage to reach these outposts last century, there is a replica of the Carthaginian, a historic brig which houses a further exhibit on whales and whaling.

The original Carthaginian was lost at sea in 1972 on her way to dry-dock in Honolulu. On Oahu, in the centre of Honolulu, is the site of one of the earliest Western communities. Against the backdrop of skyscrapers is the historic stone church of Kawaiahao, where King Karnehameda III spoke the words that became the State's motto: 'the life of the land is preserved in righteousness'. Outside is the 1874 mausoleum of his descendent, King Lunalilo. Nearby are the remaining modest mission houses, including the Chamberlain family home, brought packaged from New England in 1831. The missionaries had a comparatively easy path into the mainstream of Hawaiian life, mingling with royalty at a time when the worship of innumerable gods had fallen into disrepute. They devised an alphabet and written language, paving the way for a Western style state. This is visible at Kona on the Big Island. The former royal seaside residence Hulihee Palace is a delightful airy house which has historic links with the British royals. The Hawaiian Prince Albert died in 1862, aged four. Captain Cook landed in Hawaii in 1778.

In his account of A Voyage to the Pacific Ocean, published on his return home, he commented that had these lands 'been discovered at any early period, by the Spaniards, there is little doubt that they would have taken advantage of so excellent a situation'. His death in Hawaii is recorded in a simple monument in a quiet bay on the Big lsland. Not much remains from the pre-Cook era, except a series of petroglyphs a few miles from where he was killed, on the Kohala Coast. Carved between AD 1000 and 1800, the petroglyphs engraved outlines on lava rocks from an extinct volcano, depict males and females, turtles and animals.

Research into their origins is currently in progress. Many visitors to Hawaii are drawn to the more recent historical memorials; up to 2 million a year come to Pearl Harbour, outside Honolulu. Visitors are shown a film which, using historical material, explains the largely economic reasons for the Japanese air attack on this naval base on December 7th, 1941. Ferries commute to the main casualty the sunken USS Arizona and land passengers on the viewing platform which bears inscriptions with the names of those who died. As this year sees the fiftieth anniversary of the attack, that brought America into the War, Hawaiians will reflect that the Japanese now own most of the hotels in the resorts.