Hanna Czarnocka, an octogenarian now living in London, recalls her part in one of the most courageous resistance actions of the Second World War. 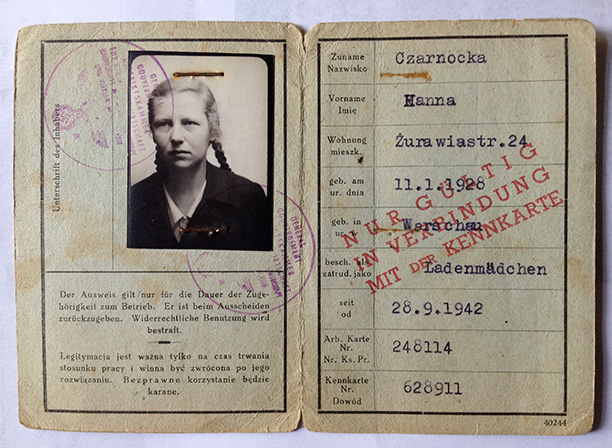 Although the water was ice cold, when 16-year-old Hanna Czarnocka reached the River Oder en route to a POW camp in the autumn of 1944, she relished the chance to wash some of the dirt and blood from her clothes. As her plaits soaked up the water, the gravel and mortar dust caught in them turned to mush, only to harden as her hair dried. ‘It was like a piece of wood’, Hanna, now 86, remembers, recalling how her friends broke the comb they tried to drag through her hair. A few days later they arrived at the Oberlangen camp in north-west Germany. As surviving combatants from the Warsaw Uprising, they were some of the first female POWs of the war.

This year marks the 70th anniversary of the Warsaw Uprising. On August 1st, 1944 thousands of Polish men, women and children launched a coordinated attack on the Nazi forces occupying the capital. Their aim was to assist and welcome the advancing Red Army as free citizens of Warsaw. The determination, discipline and sheer heroism of the Polish people meant that the Warsaw Uprising lasted an incredible 63 days. However it ended in capitulation, the destruction of much of the capital and the deaths of an estimated 200,000 Poles. Today Radosław Sikorski, Poland’s foreign minister, emphasises that the Home Army commanders were counting on the rapid advance of the Soviets into the city when they took the decision to rise against the Nazis. ‘I am convinced’, he says, ‘that if they had known what consequences their decision would bring, they would never have taken it.’ For strategic and political reasons the Russians stayed put.

‘My war started when I was 11’, Hanna explains. In 1939 the Russian authorities arrested her father and she and her mother, Halina, fled to Warsaw. There they joined the fledgling Polish resistance. ‘Warsaw is the source of all our misfortunes’, Hans Frank, the Governor General of the German-occupied Polish territories, wrote. ‘The place from which discontent is spread through the whole country.’ By early 1940 Frank was running a terror campaign aimed at subduing the population through fear of arrest, torture, transportation or execution.

The resistance grew in direct response. A propaganda unit was established. Regular reports on enemy plans were smuggled out. A Polish-Jewish resistance group helped many thousands to evade Hitler’s Final Solution and munitions were organised for immediate use, as well as to arm a future uprising. Hanna received first-aid training. Her mother became secretary to Chief-of-Staff of the Home Army, General Pełczyński, until she was arrested and sent to Auschwitz.

By the summer of 1944 the Russians, now officially Poland’s allies, had reversed the German advance and France was fighting towards liberation. Sensing change, the Polish government-in-exile authorised the commander of the Warsaw corps, General Bor-Komorowski, to announce an uprising at his discretion. Attached to a Home Army medical team, Hanna shared the mood of optimism. She had become used to clandestine work, occasionally hiding resistance papers in her underwear as she moved around the city. When she was sent to collect white and red armbands with the Polish eagle stamped on them, to be worn openly, she knew the rising was imminent. ‘I felt like I had been sent to collect freedom that afternoon’, she remembers.

The uprising forced the Wehrmacht out of large areas of the capital. Hanna was soon nursing the wounded and helping with operations, taking messages between units and recovering the injured, sometimes under fire. By mid-September supplies were low and she was sent to the polytechnic to retrieve some methylated spirits to serve as rough antiseptic. ‘I had a rucksack made of war materials, just strong paper really, and off I went, through cellars and climbing the ruins’, she told me. Having packed ten glass bottles of meths into her bag, as much as it could hold, she ‘was happily returning when some Stukas flew overhead, dropping their bombs’. The next planes dropped incendiaries. Flying debris smashed one of the bottles and Hanna felt the spirit soak her shirt, strangely cold as it evaporated in the hot air of the now burning street. Essentially she was carrying nine Molotov cocktails strapped to her back. ‘At that point I realised I was going to die’, she recalled: ‘I was a bit afraid, but not much.’ When she made it back to her unit, she was simply chastised for the broken bottle.

It was clear that the Poles could not hold out for much longer. The Home Army had launched its action with around 45,000 soldiers in the Warsaw district, armed with pistols and grenades but few heavy weapons. The Germans had around half that number, but were fully equipped and supported by artillery, panzer divisions and the Luftwaffe.

Although Moscow Radio had appealed to the Poles to rise up, the Soviets remained encamped on the far side of the River Vistula, a few hundred yards from the action, waiting, in Hanna’s words, ‘for the Polish elite officers [and opponents of communism] to be finished off’. Although a few supply flights got through, Britain was unable to provide significant support without refuelling at Soviet bases, for which permission was denied. After the Tehran conference of November 1943 it did not serve Russian interests to support a strong Polish resistance. ‘I really honour Britain’, Hanna says, ‘but I think the British were wrong. They didn’t want to irritate Stalin and Russia. That was the compromise.’

On the evening of October 2nd she was struck by the ‘sudden silence after so much noise’. The capitulation had been signed that afternoon. Under the terms of the ceasefire the Home Army were obliged to deliver Poles to be sent to POW camps. Hanna was among them. To her joy she was liberated on May 12th, 1945 by soldiers wearing Polish insignia. A few weeks later she was reunited with her mother, whom she did not at first recognise: ‘She was so wasted.’ Halina Czarnocka had been transferred to Bergen-Belsen and liberated a week before her daughter.

I asked Hanna whether, looking back, the decision to take up arms had been the right one. ‘You can’t give up when there is no good alternative ...’, she told me. ‘I was present when somebody asked Bor-Komorowski when he had taken the decision to fight. He stood, said nothing for a moment and then answered: “In September 1939. We decided to fight. We had to fight”.’

As Radosław Sikorski makes clear, the Polish Home Army commanders took their decision in full expectation of support from their Allies, but for Hanna, as for so many Poles, when it came down to it, ‘We just simply had to fight’.

Clare Mulley is the author of The Spy Who Loved: The Secrets and Lives of Christine Granville, Britain’s First Female Special Agent of WWII (Macmillan, 2012).