Roger Hudson describes the destruction during the Paris Commune of the memorial to Napoleon’s victory at Austerlitz in 1805. 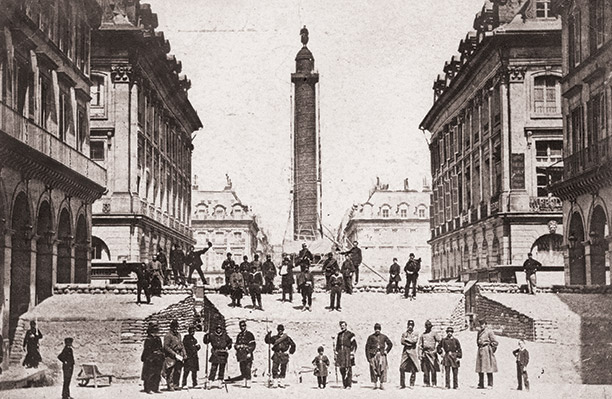 One of the entrances to the Place Vendôme at the heart of fashionable Paris has a highly professional sandbag breastwork across it, complete with embrasures for two pieces of artillery. Behind it, the centrepiece of the Place, the Column of the Grande Armée, looks as though it already has attached the cables that will shortly be used to topple it. France, or at least its capital, is in the grip of civil war. It has only recently lost a humiliating war with Germany. It ended, after a long siege, with the surrender of Paris on January 27th, 1871. But the terms inflicted on France – the loss of Lorraine and Alsace – the victory parade of 30,000 German troops along the Champs Elysées and finally the removal of the new French Republic’s right-wing National Assembly from Paris out to Versailles are too much for the city’s lower orders, proud of their revolutionary record stretching back through 1848 and 1830 to 1789. By mid-March the regular troops have all withdrawn to Versailles and Paris is in the hands of the Commune, the world’s first socialist regime.

Both sides were guilty of arbitrary executions and open warfare between the ‘Versaillais’ and the Commune forces, which included many members of the Garde Nationale, began on April 11th. Gestures always play an important part in French public life and the destruction of the Vendôme Column was soon being suggested. Modelled on Trajan’s Column in Rome, construction began following Napoleon’s victory at Austerlitz at the end of 1805 and the 425 bronze bas-relief panels spiralling up it were made from captured cannon. The statue on its top was of Napoleon in classical dress. Gustave Courbet, the great realist painter and homme sauvage, had always paraded his solidarity with the workers. President of the Commune’s Art Commission, he called the column ‘a monument devoid of all artistic value, tending to perpetuate the ideas of war and conquest of the past imperial dynasty, which are reproved by a republican nation’s sentiment’. It was pulled down on May 16th to the sound of the Marseillaise. The ‘forces of order’ from Versailles were let into the city by anti-communards on May 22nd and the pace of atrocities on both sides then accelerated horribly through la Semaine sanglante, as well as the burning of buildings including the Hôtel de Ville and the Tuileries Palace. By the time Communard resistance ended, the uprising had cost 20,000 lives, more than the Terror in 1793.

Courbet was given a six-month prison sentence and a fine in September, but the Republic was not finished with him as a scapegoat. In 1873 it was proposed to re-erect the column (the bronze panels had survived) at a cost of 323,000 francs, which Courbet was to pay off in instalments of 10,000 francs a year. Instead he escaped to Switzerland, where he died in 1877, killed either by this persecution and exile or by drink. Whatever its cause, his death was perhaps as well for his posthumous artistic reputation. He had become increasingly sought-after by the mid 1860s, selling 150,000 francs’ worth of pictures after the Salon of 1866, which did much damage to his anti-bourgeois image; more seriously, contemporaries like Monet and Zola also detected a falling off in his art.