The Treaty of Tilsit

Napoleon and Alexander I of Russia signed a peace treaty on 7 July, 1807. 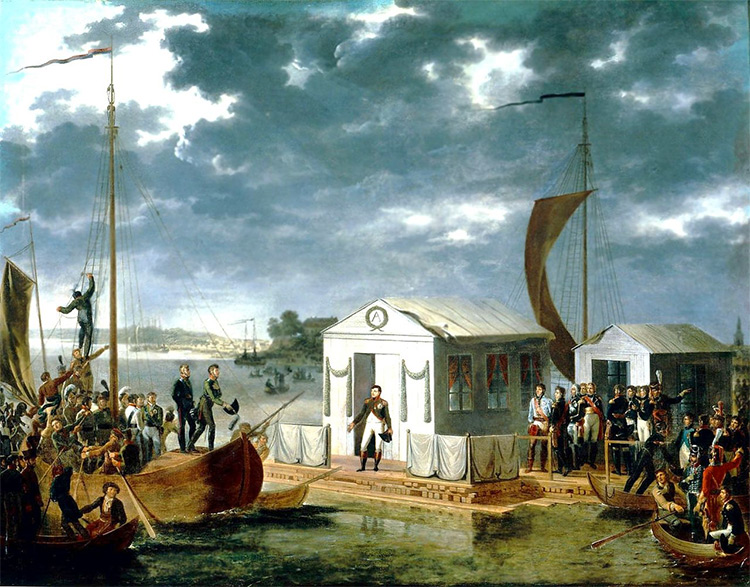 Napoleon Bonaparte, Emperor of the French, was riding high. In a series of brilliant victories from Austerlitz to Jena and Friedland he had defeated the armies of Austria, Prussia and Russia. In June 1807, after the Russians had been pulverised at Friedland, the French cavalry occupied Tilsit (later Sovetsk) on the River Nieman, the border between Prussian and Russian territory in Poland. The Russian army was in no state to continue fighting and Tsar Alexander I suggested peace talks between himself, Napoleon and King Frederick William of Prussia. Seeing an opportunity to stabilize his dominant position in western and central Europe, and isolate Britain, Napoleon agreed.

Alexander instructed his emissary to tell Napoleon that an alliance between France and Russia ‘will ensure the happiness and tranquillity of the world’. To meet on neutral ground the conference was held on a raft hastily built by the French in the middle of the river, with two grand white tents on it. The main tent had a large green letter N on it facing the French side of the river and a large A on the Russian. The Prussians noted sourly that there was no initial for their king, and they were indeed to get the worst of it. The participants were ferried across to the raft in boats for the first meeting on June 25th.

The French boat put on a spurt so that Napoleon reached the raft first and went to greet the Tsar as he arrived. Alexander reportedly said, ‘Sire, I hate the English no less than you do and I am ready to assist you in any enterprise against them.’ To which Napoleon replied, ‘In that case everything can be speedily settled between us and peace is made.’ 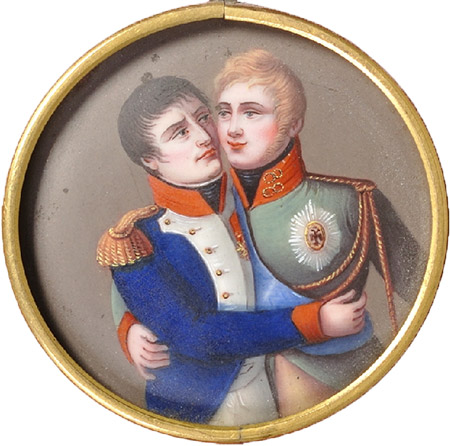 The discussions continued for several days, punctuated by entertainments in the evenings, with both Napoleon and Alexander quartered in Tilsit, dining together every day and often talking alone together far into the night. They took to each other, hugged each other when they met, walked along holding hands and exchanged cravats and handkerchiefs. Alexander told the Russian Orthodox Church to withdraw its 1806 anathematization of Napoleon as the Antichrist, though Napoleon was not above the occasional wounding hint that Alexander owed his throne to patricide – the murder of his father, Paul I, in 1801. Napoleon wrote to Josephine that Queen Louise of Prussia was charming and flirted with him, but it was all like water off a duck’s back to him.

The treaty between France and Russia was signed on July 7th and the one between France and Prussia on July 9th. Russia and Prussia were to join the Continental System, the blockade intended to destroy Britain’s commerce, by closing their ports to British ships and neutral ships engaged in British trade. Prussia, treated with humiliating contempt, was made to give up territory for the creation of the new Grand Duchy of Warsaw, for Napoleon’s ally the King of Saxony, and for the Kingdom of Westphalia for his youngest brother, Jerome Bonaparte. Prussia had also to reduce its army to 40,000 men and pay a huge indemnity to the French, meanwhile submitting to a French army of occupation until the money was handed over. The flirtatious Queen of Prussia was  so distressed that she knelt in front of Napoleon pleading for concessions, but he brushed her aside.

Many influential Russians and Prussians regarded the treaties as shameful capitulations, and they did not last. At the end of 1810 Alexander opened Russian ports to neutral ships because of the damage the blockade was doing to his country’s economy. Napoleon invaded Russia in June 1812.