A Titian for the National Gallery

The Director of the National Gallery, Sir Edward Poynter, acquired Titian's 'Man with a Quilted Sleeve' for the museum on August 14th, 1904. 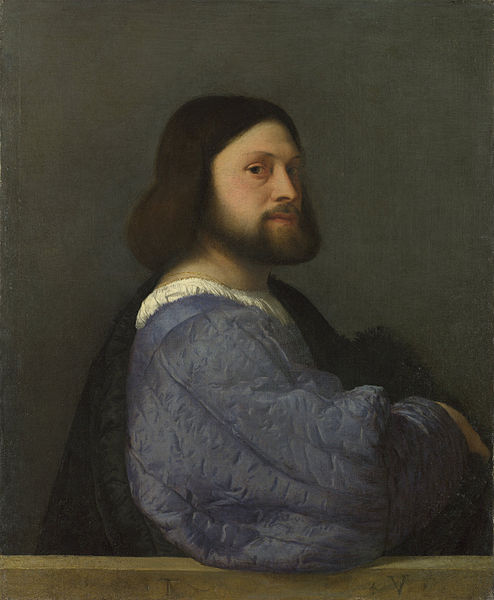 The painting cost £30,000, equivalent to around £2 million today, or say £2,400 per square inch. It was believed to be a portrait of Lodovico Ariosto, court poet of Ferrara and author of Orlando Furioso, who was an older contemporary of the painter. The identification is no longer accepted and it is now called ‘Portrait of a Man’ or ‘Man with a Quilted Sleeve’. It is generally dated around 1512, when the painter was in his early twenties, and it may be a self-portrait. The man in the painting has the big chin and underslung lower lip visible in portraits of Titian when he was older.

In the 1630s the painting was in Amsterdam, where an engraving was made of it and Rembrandt presumably saw it, as it apparently inspired his self-portrait of 1640. It seems to have been bought and taken to Paris by Alfonso Lopez, a Spaniard working for Cardinal Richelieu. In 1641 a letter from Paris to London mentioned that Titian’s famous portrait of Ariosto the Poet was coming up for sale and asked that Sir Anthony Van Dyck be told about it. Van Dyck was court painter to Charles I and his earlier self-portrait with a sunflower is thought to have been influenced by the Titian. He presumably bought the picture before his death at the end of 1641 because Titian’s ‘Ariosto’, assuming it was the same painting, is in an inventory of his possessions made in 1644.

By 1824 the painting was in the collection of the Bligh family, Earls of Darnley, at Cobham Hall in Kent, who lent it to exhibitions at the Royal Academy in 1876 and 1895. It was spotted by the Director of the National Gallery, Sir Edward Poynter, the painter, who was simultaneously President of the Royal Academy. In December 1903 he approached the Earl of Darnley, who was pressed for cash and wanted to sell the Titian and a Van Dyck. He asked £35,000 for the Titian, which Poynter said was too much. Lord Darnley then sold it for £30,000 to Sir George Donaldson, a Scots music world bigwig who was a benefactor to the Royal College of Music and the Victoria & Albert Museum. Poynter, dismayed, approached Donaldson while also sounding out the government about money. Lord Lansdowne wrote from the Foreign Office to say that ‘the price asked seems to me enormous’ and that ‘no moment could be more inappropriate for demanding a large sum from the Treasury for the purchase of pictures’ (nothing changes).

After protracted discussions Donaldson decently agreed to sell the Titian for the price he had paid for it and it was acquired with a special grant from the government and contributions from the Earl of Iveagh (head of the Guinness family), Waldorf Astor, J. Pierpont Morgan and Alfred Beit among others. Poynter’s tastes ranged wide and more than five hundred pictures had been added to the National Gallery’s collection in his ten years there, including Rembrandts and the first examples of Goya and Dürer. The Titian was a crowning glory to add to the ‘Bacchus and Ariadne’ and the ‘Noli Me Tangere’, and he retired at the end of the year.

The sitter of this painting is now believed to be Gerolamo di Andrea Barbarigo, grandson of Doge Marco Barbarigo. Read more on the National Gallery's website.