State Opening of the New Houses of Parliament

Twelve years after the first stone of the new building was laid, the state opening of the new Houses of Parliament took place on November 11th, 1852. 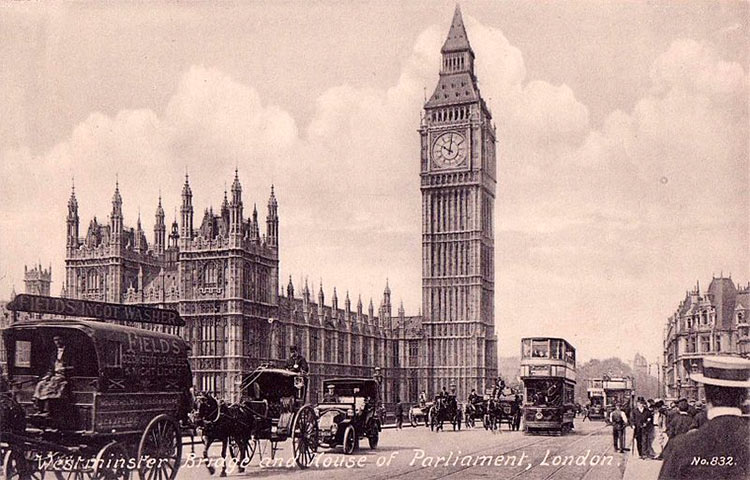 When Queen Victoria was crowned in Westminster Abbey in 1837 most of the palace of Westminster was still a blackened wreck after a catastrophic fire three years before. The competition to rebuild the ancestral home of parliament in the Gothic or Elizabethan style attracted 97 entries and was won by Charles Barry, a brilliant architect in his early forties. Barry was a master of planning, organisation and dealing with bothersome committees and he had designed some Gothic buildings, but he was not at heart a Goth. For that he enlisted Augustus Pugin, a genius in his twenties, a devout Roman Catholic and a fanatic for Gothic as the only proper architecture for a Christian nation. Georgian neo-classical architecture he denounced with the most passionate ferocity as pagan, the architecture of temples to the Greek and Roman gods.

Between them Barry and Pugin created the efficiently planned, sumptuously pinnacled and massively impressive edifice which stands on the bank of the Thames today, a monument to 19th-century patriotism and self-confidence. Much of the detail, interior and exterior, all the way down to doorknobs and inkstands, was designed by Pugin, who prepared detailed drawings by the thousand. It took thirty years to build, far longer than the six years originally estimated, and both Barry and Pugin would die before it was finished. The cost, estimated at £700,000-plus, swelled to nearer £2 million in the end.

Work on the river wall began in 1837. The first stone of the new building was laid by Barry's wife in 1840. The masons went on strike in 1841. Bitter and protracted arguments developed with the heating and ventilation specialist, Dr Reid. The original plans, necessarily produced in a tearing hurry, had to be modified. Modifications attracted carping from committees of the House of Commons, who were patiently seen off by Barry and the commissioners of the Board of Works. Different people who were appointed to keep an eye on different aspects of the work changed their minds frequently and often did not agree with each other. E.B. Denison, the future Lord Grimthorpe, who designed Big Ben, was a nightmare to work with and denounced Barry in characteristically intemperate terms in The Times. Steady support came from Prince Albert, who presided over a committee vetting the choice of paintings and sculptures for the new building, though this was yet another body of opinion for Barry to cope with. No painters or sculptors were appointed to the committee, which decided that the works of art were to be on subjects from English history and literature.

As the work went on, Barry was often seen climbing about on the scaffolding, with the ebullient Pugin laughing and capering cheerfully at his side. Barry called him his comet. A remarkable team of craftsmen was assembled, Mr Thomas in charge of stone carving, Mr Minton for tiles, Mr Crace for ornamental painting, the firm of Hardman for stained glass. The new House of Lords was used from 1847, the new House of Commons from early in 1852. There were complaints about its small size and the acoustics. That year, poor Pugin, who was always wildly over-the-top, was declared hopelessly insane and put away. He died in September. At last in November the queen came in stately procession to enter through the Victoria Tower and open Parliament for the first time in the new building.

Barry was soon knighted, but his last years were eaten up with wrangling over his pay, which had been based originally on the six-year estimate for the building operations. The Treasury displayed the utmost determination, ingenuity, tergiversation and meanness of spirit in trying to cut his fees. He died in 1860, aged 64, and was buried in Westminster Abbey. The building was completed during the following decade by his son, Edward Middleton Barry.