The first Christian missionary to the country, Francis Xavier, departed from Japan on November 21st, 1551, having made perhaps some 2,000 converts. 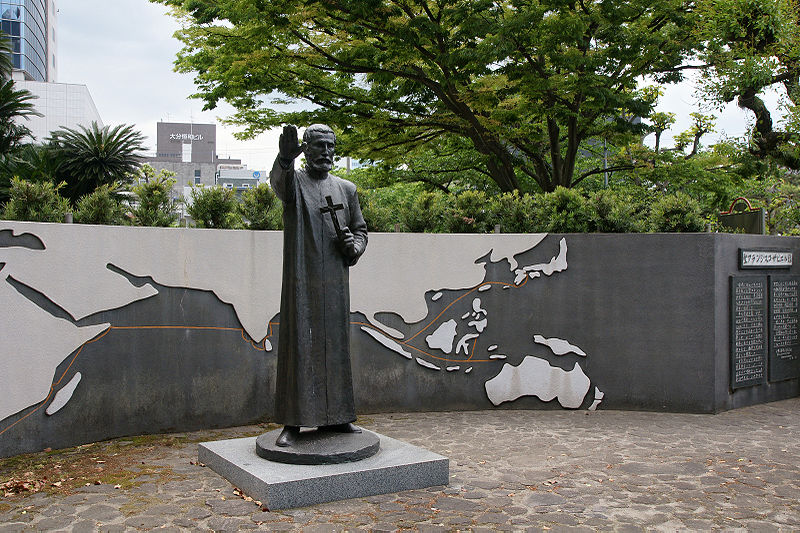 The earliest Westerners to discover Japan seem to have been adventurous Portuguese traders who came across it by accident in the 1540s. They were soon followed by the first Christian missionary to the country, Francis Xavier, the Apostle of the East. A Basque from Navarre, he had shared a room at the University of Paris with a fellow-Basque, Ignatius Loyola, and was one of the group of young men who joined Loyola as founders of the Society of Jesus. In 1542 at the behest of John III of Portugal he arrived as a missionary at Goa, the Portuguese colony in India. After making many converts in India, in 1545 he moved on to Malaya and the Moluccas. A meeting in Malacca with a Japanese Buddhist named Anjiro, who had killed a man in a brawl and was troubled in spirit, aroused Xavier’s interest in the country. ‘God has put it into my heart,’ he wrote to King John, ‘to go to the islands of Japan to spread our holy faith.’

He duly arrived in a Chinese junk at the Japanese port of Kagoshima in 1549, a few months after his 43rd birthday. In his party were another Jesuit priest, Cosmas de Torres, a lay brother, Juan Fernandez of Cordova, and Anjiro, who had been baptised and had taken the name of Paul of the Holy Faith. Unfortunately, much of the well-meant information he provided about his native land would prove to be wrong.

Xavier took to the Japanese and in his first letter from Japan, which became famous in the West, he called them ‘the best people yet discovered’. He found them well-behaved, courteous and kindly. ‘They esteem honour more than anything … They will stand no insults nor slighting words.’ Japan was to prove a hard nut to crack, however. The Buddhists were hostile, Xavier spoke no Japanese and Anjiro’s crude translation of his exposition of Christianity aroused incomprehension and contempt. He realised that the methods which had worked in India would have to be changed for Japan. Apostolic poverty, for example, which had appealed to people there, put the Japanese off.

Preaching through his interpreter as he went, Xavier reached Kyoto, then the Japanese capital, but the emperor refused to see him and he had to leave. By November 1551, having made perhaps some 2,000 converts, he decided to go back to India, to check on matters there. He also came to think that a successful approach to Japan might be made through China, which the Japanese revered as a source of profound wisdom. He set off for China the following year, but died in December 1552, before he could obtain permission to enter the country. Christianity gained more adherents in Japan, but encountered ferocious persecution later in the 16th century and was suppressed altogether in the 17th.